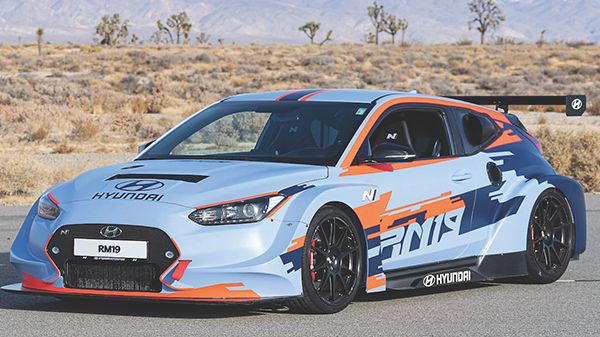 On more than one occasion, I have pondered about converting a regular hatchback into an amidships alternative. Most recently, I have contemplated the potential of a Skoda Citigo (to be powered by a 300bhp Golf R engine) and even a Suzuki Swift (with a 2.7-litre V6 engine), as a means to developing a dynamic mid-engined powerhouse. However, Hyundai has beaten me to the task with its remarkable research and development version of an i30 Coupe. All kudos to Hyundai for speculating about its future from several tangential viewpoints, as it considers front-to rear weight transfer, among other applications of its otherwise, full-weight and conventional models. In this instance, it has installed a 2.0-litre, four cylinder, 390bhp fuel-injected turbo-petrol engine from one of its TCR racing models.

Boost enhancement whisks it from a controlled race-spec 320bhp. Leaving a modified coolant radiator in its standard location in the car’s nose, the engine has been relocated and mounted to a fabricated rear subframe, to drive the rear wheels. Additional cooling ducts, cut into the car flanks, channel cold air directly into the rear of the coupe to remove overheating issues. While the MacPherson strut front suspension is retained, along with Hyundai’s standard electric power steering rack, a new double wishbone set-up, with optimised hard points and geometry, has been devised for the rear. Both ends feature adjustable dampers. Race standard 6-pot front and 4-pot rear brakes are fitted. Yet, apart from some fairly wild aerodynamics and bolstered wheel-arches, which cater for its 0 60mph time of 4.0s and restricted top speed of 155mph, the i30’s body is mostly standard.

It helps that VW Group is the largest in the world motor industry, because it can afford to invest heavily in new technology. Having launched its ID.3 fully electric (Golf size) hatchback model, it is now turning its development hand to a Passat size estate car. Boasting a drag factor of just 0.24Cd, its (light) weight and airflow optimised bodywork sits on the company’s modular MEB electrified platform that places the 82kWh lithium-ion battery pack between front and rear axle lines, for maximum chassis stability. Its full-charge range is stated as 300 miles (WLTP) and it will cover 0-60mph in 5.0s, with a top speed of around 130mph.

Two electric motors drive all four wheels. Its cabin is upholstered in a sustainable new material known as ‘AppleSkin’, which is a type of man-made leather produced from residual materials from apple juice production. As part of the company’s drive towards removing fossil fuels and associated non-renewable products from its future models, no chromium plating is applied to either trim panels or levers, with a water-based silvered paint replacing it. Recycled aluminium alloys are used for dashboard and seating sub-structures. Augmented Reality and a head-up display replaces the full instrument panel, with a mini display screen carrying only basic information (mileage, lamps and speed). All entertainment, comfort and online functions, as well as vehicle settings, are grouped onto a 15.6-inch ‘floating’ touchscreen in the dash-centre. Conventional steering column stalks control the usual functions, with touch-sensitive strips for minor controls on the steering wheel cross- spokes. An intuitive strip known as ‘ID.Light’ provides key information to both driver and occupants.

The fourth generation Octavia has been launched by Czech carmaker, Skoda. While there are no surprises on the overall design front, which is another evolution of the original model, the new car benefits from even tighter quality control (it has always been excellent!) and the application of even higher quality materials and features. Although a vRS model is said to be on the way, the new top version is a 201bhp 1.4-litre plug-in hybrid. Driving through a 6-speed DSG, it has a 33-miles EV-only potential range, as a tax-friendly and toll-free proposition. In addition, two e-Tec variants featuring mild hybrid technology are available in 1.0-litre 107bhp and 1.5 litre 147bhp forms, driving through a 7-speed DSG. They enable ‘engine off’coasting and a power boost from a belt-driven starter/generator and 48V lithium-ion storage battery, using brake energy recovery.

Lower fuel consumption and CO2 levels are promised. On the ‘Simply Clever’ front, a new large filler spout for refilling the AdBlue tank, a pair of smartphone storage slots and either an umbrella, or brush-holder can be specified in the front door panel. A ‘Sleep Package’ consisting of a pair of larger rear headrests and a blanket is now available for the rear seats, while the screenwash bottle now features a special filler neck. Water ducts now feature on the windscreen to eliminate those annoying runs after using the wipers. The tailgate can now be closed with a light touch. A tablet-holder is available for rear seat occupants, while a standard rubbish bin helps to keep the detritus under control. The child safety locks on the rear doors can be operated electrically from the driver’s seat and there is a new storage compartment fitted into the underside of the rear parcel-shelf.

JAGUAR – CAN DO ‘SEX- ON-4-WHEELS’ MOST SUCCESSFULLY, WHEN IT TRIES

Pushed into a corner to create a family saloon, or an SUV, Jaguar Cars has churned out some real howlers in recent years (remove the badges and they could be anybody’s!). Yet, it is abundantly clear that a genuine creative streak still exists within its portals, as evinced by the gorgeous new F-Type. Available as either hardtop coupe, or soft-top convertible, although not entirely new, as it is based on the same platform as before, F-Type has been comprehensively revised. Therefore, it is not so much one aspect of the car, on which we can be focused, but a total transformation that takes in more technology, even greater engine power, refined design details and a thorough revamp of the sporting car’s dashboard and interior accoutrements.

Many of medium-sized Jaguar’s reported woes have arisen from the firm’s product arrogance, by which it believed it was on the right track, when, in reality, it was not. There is a new order at the company that is resulting in change, which can be slow to occur, as it seeks to rebuild its reputation. With the new F-Type, it is not so much the prettier LED headlamps and crisper shape of the bonnet and wings but a need to resolve the unreliability issues that have blighted the brand. Much of the technological advancement made with the new car is geared towards that aspect. Its appeal to the supercar fraternity is exemplified by the F-Type R with its 571bhp supercharged V8 petrol engine and 4WD. Fortunately, a 296bhp 2.0 litre turbo satisfies those with smaller budgets.