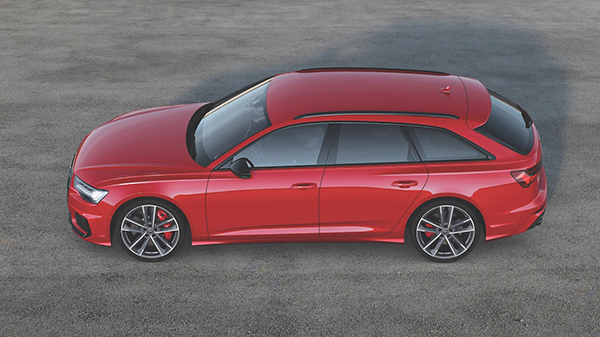 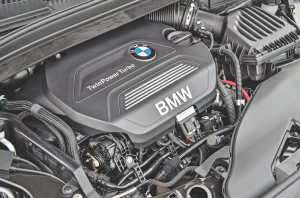 As similar as the new BMW 1-Series looks to its 2004 originator, it has been the Bavarian firm’s Millennial present, the MINI, that is driving it from rear to front-wheel drive, although engineering for 4WD is also a major consideration. Of course, BMW seldom makes changes to its range, unless it can, firstly, offset costs against other products and, secondly, ensure

that the research and development is carried out by a sister brand. In this case, the core architecture of the new 1-Series hatchback comes from the BMW X1 SUV, while the mechanical package is a direct lift from the MINI Countryman…and you just thought that ‘Mini’ was becoming ‘Maxi’… The search for greater cabin flexibility and space lies behind the decision, with a simpler rear axle in 2WD form (no propshaft) and suspension set-up. However, BMW also gains around £600 saving per unit, as a result of swapping inline to transverse engine layout. The X2 Tourer was the first BMW to go front- wheel drive and lessons learned from that model have been incorporated in the new higher volume 1-Series, which will also share its 4WD hardware in due course. Featuring a similar chassis vectoring system to that which debuted on the i3S (EV), the revised layout proposes to be the best front-driven car presently on sale. 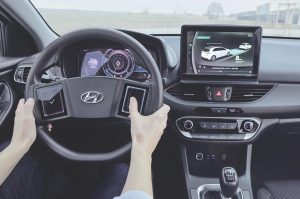 HYUNDAI – THE VIRTUAL COCKPIT WILL BE WITH US SOON

HMI is the Human-Machine Interface that is said to make car dashboards more intuitive and user-friendly. Hyundai intends to replace all hard keys with touchpads, to increase both clarity and flexibility. In addition, both user-customisable aspects and even haptic feedback (increases tactile switch sensations), via the steering wheel, are yet to make volume production but they are being readied presently. Hyundai’s next-gen proposition features a steering wheel equipped with two displays that are larger and ergonomically adjusted, with adaptable ‘pads’ on either side of the cross-spokes. The instrument cluster will be changed to a multi-layer display. It allows a natural method of attention control, using visual 3D effects, with one part of the graphic shown on the front display and the other part on a rear display. Information indicated on the steering wheel located screens changes according to the instrument cluster menu level and also by reacting to the driving situation, which can display ‘shortcuts’ tailored to individual driver needs. Unsurprisingly, the technology is similar to smartphones. The end of the road is not yet in sight for production readiness but Hyundai will use the results of the human clinics taking place in Korea, North America and Europe to integrate them into its future car interior Virtual Reality development plans. 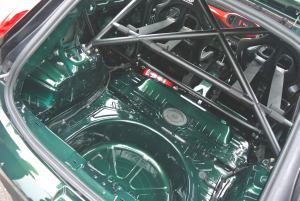 Chinese carmaker SAIC has produced the MG3 hatchback since 2013 (revised last year). It is well-regarded for its comprehensive equipment list, affordable pricing and five years manufacturer’s warranty. Intended as a budget car, it relies on traditional engineering that is both inexpensive and easy to maintain. SAIC also hosts a number of British and overseas student interns at its UK Technical Centre at Longbridge, Birmingham, whom it tasked with building a race-viable version of the MG3.

The company provided the base model and set a budget of £5,000. Starting with a used car, it proves to be an inexpensive means to go motor racing and is a most welcome project in an otherwise high-cost arena. Apart from a trim strip-out, fitting a roll-cage, race seat, safety harness and fire extinguisher system (regulation essentials), the suspension and brake friction materials were upgraded and the car repainted and liveried. It can be raced on road tyres, or uprated alternatives. Driven at Castle Combe racing circuit (Wiltshire), the car handled neutrally, shifted gears effortlessly, stopped and steered perfectly and was immense fun to drive surprisingly quickly. The MG interns have also created a 250pp ‘Build Book’, which outlines all project ‘how to’ details. Whether you, or your customers, wish to go motor racing, the development of this truly cost-effective means to do so legally is now available. 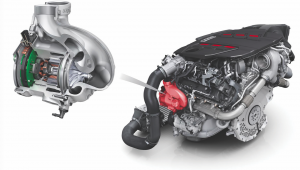 Volkswagen Group is renowned for trying different types of forced induction on both its petrol and diesel engines, even employing both turbo and supercharging on the same unit. For the first time in the history of Audi’s ‘S’ series models, a torque-rich 3.0-litre V6 diesel factors-in a high-performance option. Developing a
substantial 516.3lbs ft of torque, it is augmented by a 48V electrically-powered compressor (which sits in the vee of the engine) that combines with the exhaust-driven turbocharger to produce 350bhp. The supercharger pre-empts any hint of turbo-lag, to which conventional turbocharging is susceptible, to provide vigorous mid-range urge and, with a 250milliseconds spool-up time, near-instant responses to throttle input. The result is a 0-60mph time of 4.7s and a restricted top speed of 155mph. Yet, it also features Mild Hybrid technology, with a belt-driven alternator-starter and a 10Ah lithium-ion battery located beneath the boot floor. Apart from a ‘Start/Stop’ facility, its direct connection to the crankshaft allows it to recover up to 8kW of power under acceleration that is stored in the lithium- ion battery for later deployment. However, the engine can coast for up to 40s, with the ICE deactivated, which helps the car to return up to 36.2mpg and emit just 162g/km CO2 (WLTP figures). Advanced cooling provides speedy warm-up and the engine is exceptionally refined overall.