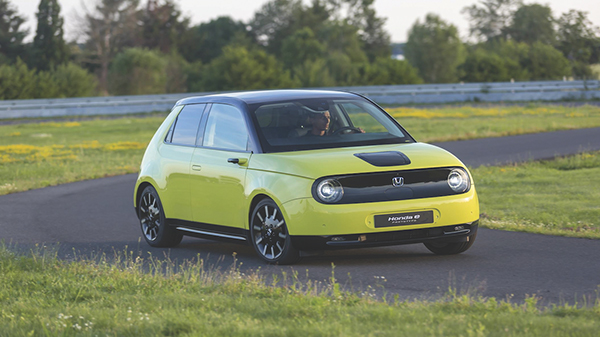 We have all heard about and worked on various ‘Constantly Variable’ aspects of valve-train technology but South Korean carmaker, Hyundai, still believes in the on-going viability of the ICE. It says that its Constantly Variable Valve Duration (CVVD) optimises engine performance, fuel efficiency and emissions. In essence, the system regulates the duration of intake valve opening and closing, according to driving conditions. It claims to increase power by 4%, with a 5% improvement in fuel economy, while reducing overall CO2 exhaust emissions by a significant 12%. While variable valve technology is far from new, Hyundai claims that CVVD takes it in a fresh direction, by adjusting the length of duration that an intake valve is open. It opens the intake valve from the middle to the end of the compression stroke, improving fuel efficiency by reducing the forces acting against the piston. At higher speeds, keeping the intake valve closed during the beginning of the compression stroke maximises the amount of air in the mix to create superior combustion, therefore increasing torque and improving acceleration. Later this year, Hyundai will launch the new petrol engine that features CVVD in 1.6-litre V4 form, with turbocharger and direct injection, in a new Sonata model. It develops a cool 180bhp and 195lbs ft of torque. The new unit also features 350bar fuel pressure, a new thermal management system to heat, or cool, the engine speedily and 34% lower friction parts. 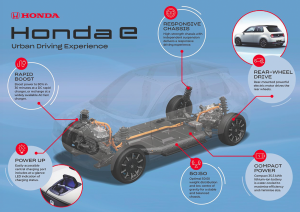 With hopes of managing expectations for its all new Honda e, as THE EV of choice for city dwellers, the Japanese carmaker has insisted on a ‘simplicity-first’ stance. Featuring a water-cooled 35.5kWh lithium ion high capacity battery pack, the Honda e can be charged using either a Type 2 AC connection or a CCS2 DC rapid charger, with an at-a-glance indication of charging status. The Honda e has a driving range of up to 125 miles, to underscore its urban mobility role. A rapid charger can restore up to 80% of its battery capacity from ‘empty’ within 30 minutes. The charge port is located beneath a small flap set into the bonnet’s leading edge, with an illuminated glazed panel for nocturnal charging. The full-width digital instrument panel inside the car also displays charging and usage rates. Set to be launched in two months’ time, its low and compact, mid-chassis battery location helps to provide it with a near perfect 50:50 weight distribution. Dedicated to providing balanced dynamics, the electrically driven rear axle ensures that the car’s steering responses are uncorrupted. However, featuring fairly conventional independent suspension, with many components produced from forged aluminium, the car has been gifted a fluent ride quality allied to a first-rate, responsive handling remit. A tight turning circle aids urban manoeuvrability. Although the car was revealed at Geneva earlier this year, it was also demonstrated at the recent Goodwood Festival of Speed and has attracted over 30,000 interested responses across Europe, with 9,000 from the UK. 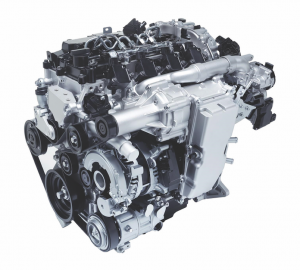 With its latest Mazda3 model, which boasts exceptional aerodynamics (0.21Cd), the Japanese company continues to exercise a larger ICE engine capacity with lower specific power outputs in both petrol and diesel forms. CO2 ratings and noxious emissions are the core issues. Rather than take the small engine/high power route of many of its rivals, an aspect leading them to revert to larger capacity
ICEs, due to future emissions requirements, Mazda has concentrated on‘Well-to-Wheel’(W2W) methodology, believing that current EV ratings of 0g/ km are disingenuous. It supports its contention by stating that its Skyactiv-G (petrol) and -D (diesel) units average out at 142g/km, while an equivalent EV might be around a true 124g/km, which suggests that a 10% improvement in efficiency would draw them into similar territory. Mazda believes that the ICE will have a major role to play beyond 2030. However, it is the firm’s Skyactiv-X engine development, featuring Spark Controlled Compression Ignition (SPCCI) that combines the benefits of both spark and compression ignition technology, which is its most exciting development. Running 2-3 times leaner than today’s ICEs, conventional spark plugs alone cannot ignite the mixture. Mazda’s solution is to trigger both forms of combustion in different ways. By managing the spark, while compressing the mixture, using a new piston design, the combustion phase can be stabilised, made predictable and reliable, but both work seamlessly together, as dictated by load. SPCCI returns 20% greater fuel economy, while torque increases by 10-30%. 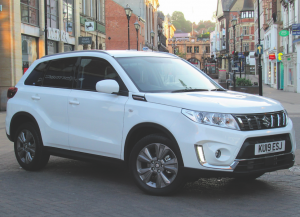 For many years, the world’s best small car specialist was Fiat. Today that mantle is worn by Suzuki Cars. While the Japanese company’s design stance is a blend of pleasant and benign, its first-class engineering has seldom been drawn into question. The Vitara crossover model pictured is a good example of a market-leading 1.0-litre turbo-triple (109bhp) powered car that can boast 50mpg potential but, under WLTP rules, emits 153g/km in 2WD form (162g/km 4×4). Although road tax and (for business-users) Benefit-in-Kind taxation continue to use existing NEDC (New European Driving Cycle) laboratory ratings for both fuel economy and emissions, the change to WLTP (World Harmonised Light Vehicle Test
Procedure) ‘real world’ testing will occur within the next two years. As a result, Suzuki is now developing its naturally aspirated GDI DualJet, rather than the more recent BoosterJet turbo-petrol technology. The engine capacities will increase, although Suzuki is remaining tight-lipped on what size they will be. DualJet engines are a collaboration between Suzuki and Bosch and feature paired fuel injectors. Being positioned close to the combustion chamber, improved fuel atomisation, faster vaporisation and more efficient filling of the chamber are achieved. Like Mazda’s latest engines, a higher compression ratio (12.0:1) increases the speed that the flame passes through the mixture and it burns more efficiently. It has revised piston crown profiles, below piston cooling, an optimised water jacket and a revised EGR layout (to deal with NOx emissions) featuring integrated cooling to resolve abnormal combustion events such as misfiring, fuel issues and so on. 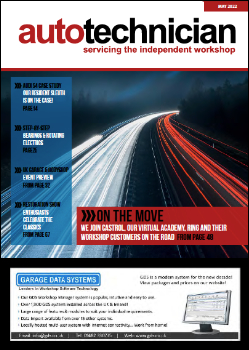