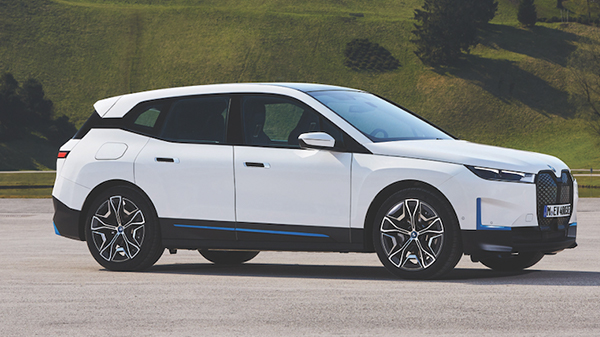 According to BMW, the future of driving pleasure is electric and emission-free at a local level. However, the company that prides itself on producing Ultimate Driving Machines, admits that the silent clinical efficiency of pure electric driving loses a degree of driver ’emotion’.

Its answer is to engage the services of Hans Zimmer, a film music composer, to create a series of scores that are relayed into the cabin via the speakers of the company’s battery electric (BEV),
or plug-in hybrid (PHEV) cars. It claims that, in the future, electric driving pleasure will be enhanced by acoustic feedback to every movement of the accelerator pedal. This is in addition to the artificial sounds that an electric vehicle must emit outside at low speeds, to warn pedestrians of their presence.

Both Mr Zimmer and Renzo Vitale, Creative Director of Sound at the BMW Group, have produced scores, tailored towards each electric vehicle’s different characters. A more vivid driving tune has been developed for the more sporting electric ‘M’ cars, the first of which (the i4 M50, as featured in our New Car report) will be launched within the next twelve months.

The latest task has been to create suitable drive sounds for the more mainstream iX and i4 models. BMW says that the IconicSounds Electric also takes cues from the driver’s personal preferences, which may mean that it can be switched-off. Indeed, IconicSounds is deactivated automatically in the ‘ECO PRO’ mode.

When COMFORT mode is selected, BMW says that an immersive and pleasant atmosphere is created but the sound deepens dependent on throttle position. In SPORT mode, in particular, the car’s aural spectrum becomes more powerful and the system reacts within milliseconds. For the M cars, the differentiation between COMFORT and SPORT is made more prominent.

IconicSounds Electric is a standard fitment on the BMW iX (pictured) but optional for the i4. With the latter, it will be interesting to see whether customers will be prepared to pay for the privilege of artificial interior sounds, or whether the technology will be exposed as an irrelevant gimmick. While it has focussed considerable efforts on BEVs, Renault has adopted a novel transmission for its high-voltage hybrids, with or without plug-in functionality. As Renault’s solution had to be applied to SUVs and city cars, the new gearbox had to be compact, relatively inexpensive to make, not overly complicated and efficient. The result is a new ‘automatic’ transmission that is neither a CVT, nor a DCT, but a friction clutchless dog-clutch gearbox, that the manufacturer has protected with 150 patents.

The E-Tech is a series-parallel hybrid drive system that utilises the pre-existing Renault/Dacia/Nissan 1.6-litre four-cylinder engine with this clutchless dog-clutch transmission, which is mounted transversely in the Clio hatchback / Captur SUV applications. A 230V 1.2 KWh battery pack is used for the Clio; the Captur (and Mégane) Plug-In versions possess a more substantial 400V 9.8KWh unit. The electric motors are situated within the transmission case.

On the overrun (i.e car moving, accelerator released), the main electric motor acts as a generator to recharge the battery in the conventional sense. The driver can toggle the gear lever between D (Drive) and B (Brake), which increases the regeneration level. The second, smaller electric motor (again, fitted within the gearbox) is used only when ‘Sport’ mode is selected for maximum acceleration.

As the driveline possesses neither friction, fluid nor wet clutches, the car moves from stationary using the primary electric motor. The engine is used to power the wheels only when the vehicle is in motion. Gifting misleading titles to safety equipment risks giving drivers a false sense of invincibility. A worrying trend is people confusing ADAS with driverless technology, many of whom should know better. Indeed, our own government attracted criticism from the AA, Thatcham and the Association of British Insurers in April, when the Department of Transport defined cars with Automated Lane Keeping Systems as ‘self-driving’, when the system is categorised officially as Level Three ADAS.

Tesla has also been found guilty of over-egging ADAS as automated driving. Last year, a German court found its ‘Autopilot’ claims were misleading, as the system is really Level Two ADAS, as defined by the Society of Automotive Engineers. Level Five, incidentally represents full automation.

As many readers realise, ADAS relies on the car’s ability to ‘see’ its surroundings and it does so using ultrasonic sensors, radars, cameras and lidar. Interestingly, the new Tesla Vision system ditches radar completely, in favour of eight cameras. According to reports, Elon Musk has reported that the new camera-only system is likely to be safer than radar, because they are less prone to confusing signals. However, some industry commentators have questioned the wisdom of removing radar, considering the hardware is less vulnerable to low light and poor weather conditions, compared to cameras. While Tesla Vision is available only on North American specification Model 3 and Y cars for now, it will be interesting to see if removing radar is the right move, especially considering Tesla’s ambitions to be at the forefront of automated driving technology. Built on the basic mechanical platform of its BEV e-Expert LCV, Peugeot is one of the first brands to offer hydrogen-power with a plug-in facility. Considering that there are 11 hydrogen filling stations in the UK, at the time of writing, the ability for the van to run on both hydrogen and battery power boosts its appeal.

While the e-Expert Hydrogen’s 10.5kWh battery can be recharged in fewer than 30 minutes from a 11kW, 32A wall plug, or six hours from a conventional 13 amp home socket, it can be tanked with hydrogen in under three minutes. The hydrogen is stored beneath the main floor and the battery mounts above the cylinders, directly beneath the seats. The e-Expert Hydrogen also boasts revised spring and damper settings over the BEV version.

At start-up and low speeds, the high-voltage battery powers the drive motor. Under cruising conditions, the 45kWh hydrogen fuel cell takes over. During acceleration, overtaking, or when climbing hills, the fuel cell and battery work together. On the overrun, and during braking, the electric motor supplies current to the high-voltage battery. The combination of battery and hydrogen propulsion provides a 245 miles range, a maximum payload of 1,100kgs and a 1,000kgs towing captivity. Interestingly, Peugeot guarantees that the lithium-ion battery will retain 70% of its charge capacity for eight years, or 100,000 miles. As Peugeot and Vauxhall are owned by the same group, the Vivaro-e Hydrogen is a badged-engineered alternative.