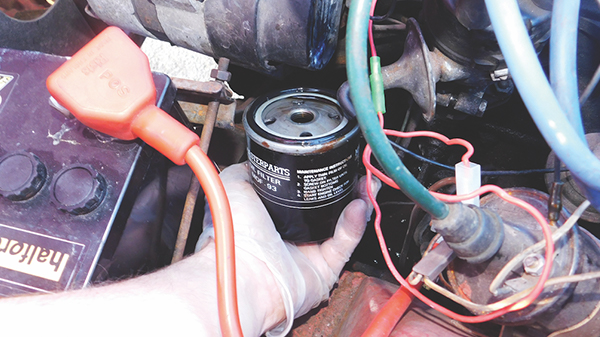 By autotech-nath on November 2, 2020
Article

Most of us fit oil filters to vehicles without a second thought. Yet, they enjoy a fascinating development story, leading Rob Marshall to provide an overview of how the modern oil filter came to be.

The need for efficient means of filtering the engine oil was realised early on in the motorcar’s inception. However, the technology to make it happen was not ready. As engineers realised that metal shavings from the various reciprocating parts could curtail engine life pretty quickly, very early motorcars (as do their modern successors) incorporated a course wire gauze, fitted either within the sump, or to the oil pick-up. However, their lack of effectiveness, coupled with very low-tech and sludge-prone lubrication oil, dictated very regular change intervals.

This somewhat cavalier approach was unacceptable for aircraft engines, where centrifugal oil filters provided a solution. Spun by the crankshaft, the resultant forces flung the contaminations into the filter’s periphery. While some cars (such as Fiat/Polski Fiat 126) were equipped with centrifugal filters until the end of the twentieth century, they were not effective at trapping the increasingly small contaminations that were being produced by more sophisticated, powerful and faster-running engines.

While aircraft manufacturers were utilising centrifugal oil filters during the 1920s, the Purolator (shorthand for ‘Pure Oil Later’) developed the first canister-type oil filter. The brand still exists, under the ownership of Germany’s Mann+Hummel. Initially, the oil passed through a cloth filtration medium and these early types tended to be of the bypass filter design, in which only around 10% of the total oil flow that the engine required at any one time passed through the element, which limited its effectiveness.

While paper’s filtration qualities have been realised for centuries, the material’s weakness made it unsuitable for continuous contact with hot engine oil. As per many other technologies, WW2 accelerated filter development and North American paper manufacturers discovered that they could add the required strength and stiffness to paper filters, by impregnating them with a phenolic synthetic resin. This discovery paved the way for Purolator to introduce the first paper element oil filter in 1946.

Even so, paper was still not ideal as an oil filtration medium. While it was undoubtedly superior to earlier fabric/cotton/ wool mixes, it was more prone to clogging. This dictated that each filter had to contain more paper to compensate, thus increasing the canister size and cost, something that most carmakers sought to avoid. A further problem stemmed from the realisation that allowing a minimal quantity of oil to enter the filter was not ideal for optimum engine life and it was far beneficial to have all the lubricant passing through the filter, before reaching the bearings. The arrival, therefore, of full-flow filtration to replace the bypass design hefted greater pressure on filter designers, who spent much of their 1950s and 1960’s efforts researching how to increase the surface area of the filtration medium, without making the filter canister unacceptably bulky.

Various filter configurations were tried to achieve this aim but the real breakthrough came from the British arm of AC Delco (owned by General Motors of North America) during the 1960s, where the Southampton-based production facility designed the vertical pleated element, which has since become universal. It is of no coincidence that this design is well suited to mass-production. At around the same time, advances in engine oil technology introduced dispersant additives. These encourage fine particles to remain suspended in the oil, rather than grouping together. This refinement addressed many of the clogging problems that plagued oil filters previously, without the filter manufacturers having to do anything. They reacted instead by reducing the filtration surface area, because they could obtain the same service life using half the paper content.

TWIST OF THE WRIST – SPIN-ON CONVENIENCE…

At this point, oil filter elements resided loosely within metal canisters. Technicians had to unscrew a retaining bolt, remove the outer can, extract the filter, wash-out any particles from the canister, locate a new element and refit the assembly to the car. As the benefits of full-flow lubrication were being realised, General Motors realised that a filter element could be incorporated into a sealed, disposable assembly. While the cost was higher, compared to a canister filter, the trade-off was reduced labour time during servicing, a fact that proceeded to be a positive sales point for new car customers. In 1954, WIX of North America (another brand now owned by Mann+Hummel) patented its spin-on ‘Twist of the Wrist’ threaded filter, which was adopted rapidly by the motor industry.

The universal adoption of full-flow lubrication, so that all oil drawn from the sump passes through the filter before reaching the engine bearings, introduced several technical challenges. First, the pressure had to be relatively high so that the pressure drop, experienced by the post-filtered lubricant, would not cause oil starvation. This could also result if the oil was cold and, therefore, excessively viscous to pass through the filter quickly. Apart from careful engineering of the filtration paper, so the resultant restriction is not excessive, a calibrated spring- loaded bypass valve permits oil to bypass the element and be pumped straight to the bearings. While not ideal, unfiltered oil at the correct pressure, temperature and flow is a better option than insufficient filtered oil. A further development introduced anti drain valves, which consist of one (or more) rubber flaps that prevent oil from draining from the filter post engine shut- down. This causes oil starvation on re-start, due to the filter having to be primed, before oil reaches the engine’s moving parts.

Although spin-on filters became virtually universal, they experienced numerous refinements internally for the filtration medium to tolerate extended servicing internals and different chemicals from the oil and fuel.

The biggest change this century has seen the gradual return of the canister type filter, with environmental motives cited as one reason. While the technician renews the filter assembly alone, with the addition of a rubber seal, or two, the filter medium is contained within an oil filter module, which includes the bypass valves, anti-drain technology and even the oil cooler within a single unit.

As tolerances within engines have become finer, some filters have replaced the traditional paper-based mediums with those made from synthetic fibres. While paper remains cost-effective, synthetic fibres are used in certain applications, dependent on the carmaker’s stipulations. More recently, the entire lubrication system, which includes the filter and its module, are being refined to help manufacturers attain the challenging CO2 emissions targets. Smaller and lighter modules, featuring filters with finer filtration abilities and improved recyclability are all trends that are certain to continue.