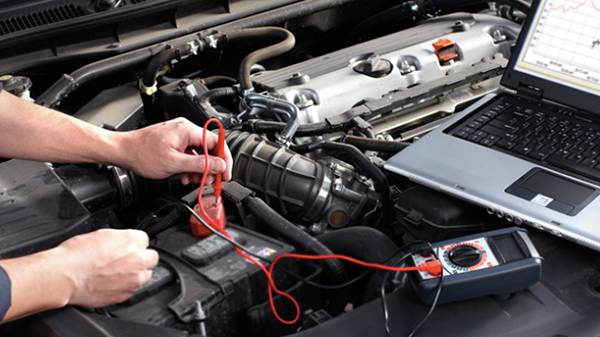 A grounding in circuitry

This month, I want to talk about why circuits are ground switched. For years, most circuits on a car were switched in the live side of the circuit, it was considered safer because the circuit was only live when switched on. So why the change?

This change came about when electronics started to take over the role of switching circuits. So why would that make a difference? Well, it is down to the way in which transistors work and how the control circuits are powered. Let’s start by looking at transistors and how they are used as switches in automotive circuits. The two most basic types of transistors are known as NPN and PNP. The names are to do with the way they are constructed. They are made of sandwiches of material and are either N-type or P-type.

Most devices on a car are now controlled by a microcontroller, a small single chip computer. Many years ago, the operating voltage for these devices was standardised at 5 volts, this being the lowest voltage that was not prone to electrical noise from other parts of the circuit switching, which could cause errors in operation. Minimum voltage also means minimum heat dissipation, something that is important if you are going to put hundreds or thousands of transistors onto a single chip and gives the ability to run the circuit from small batteries. 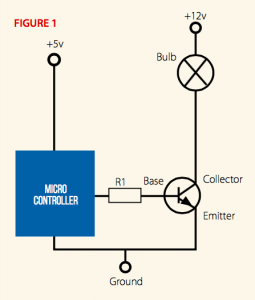 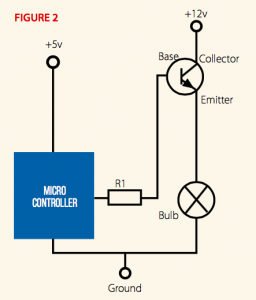 Now look at FIGURE 2. Here, I have drawn the circuit with the NPN transistor on the positive side. For the transistor to be switched on, the voltage at the base must be 0.7 volts above the emitter, so if we supply 12 volts to the Base there will be an initial flow of current though the lamp, but as the transistor reaches saturation point and the voltage drop across the Collector/Emitter becomes close to zero, the Base and Emitter voltages will be the same. We no longer have the 0.7 volt difference needed and the transistor will switch itself off. In addition, the microcontroller can’t provide the 12 volts to initially switch it on from a 5-volt output without added components and expense. 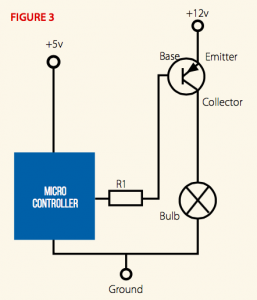 FIGURE 3 shows a circuit using a PNP transistor, these are better suited to switching the positive side. A PNP transistor is switched on by taking the Base voltage 0.7 volts lower than the Emitter (note that the terminals are the opposite way around to the NPN transistor). Our microcontroller can again manage this fine, with a current  limiting resistor to stop it being damaged, however the base now needs to be taken up to the same voltage as the emitter to switch it off. If we are switching a 12V circuit, then the base needs to reach 12V to turn off. The 5V supply from the microcontroller is never going to be able to achieve this, so the microcontroller will never be able to switch the circuit off.

Hopefully, you can see the only easily achievable way we can use a microcontroller to switch 12-volt devices is by using an NPN transistor and switching the ground side, and this is the reason for the change to ground side switching.