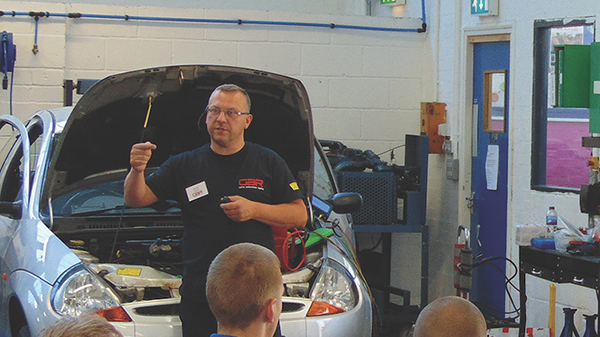 Adhering to the Diagnostic Triangle

By Andy Crook of GotBoost

Knowledge, Information, & Equipment is what I often refer to as the diagnostic triangle. You need all three to perform effectively as a diagnostic technician. The length of each side can vary but it is still a triangle. Likewise, you may require more knowledge than equipment and information on some jobs, but they all have a role to play in a successful diagnosis.

When a 2011 Audi A1 1.6 TDI common rail with the engine code CAYC was booked in for a diagnostic assessment, I had no idea which side of the diagnostic triangle I was going to lean on most. In fact, I never give it much thought, until the side I need at that moment in time lets me down and the triangle falls over.

The Audi in question came in with quite a history of recent repairs and attempts to rectify a rough running complaint. The customer completed the diagnostic questionnaire and straightaway, the alarm bells began to ring.

Several garages had fitted a number of parts, without any success, including: A set of injectors, another set of injectors (just in case), a complete fuel rail, and a rail pressure sensor. After the customer questionnaire is complete, we always ask “Is there anything else you would like to tell us?” The customer informed us that it improved vastly when it warms up. It had driven to the workshop, so we agreed to leave it overnight.

The next day we carried out a visual inspection and the first thing we noticed was a replacement engine. This had not been mentioned by the customer. We could tell it was a ‘good un’ as it had the yellow paint sprayed over it in strategic places – everybody knows this means it had been rigorously tested before sale. It looked to be fitted correctly, the fuel filter had been replaced and the oil was clean and up to the mark. So, a global scan was carried out. Five faults were retrieved:

All faults were logged over the past three months.

The vehicle was started and pronounced diesel knock was evident just before the engine cut out. The next step was a relative compression check, which as the yellow paint suggested, it passed.  Live data was the next logical step, but what should we be looking at? The obvious choice was smooth running control or injection quantity variation:

There was obviously something wrong, but what was the data indicating? The engine had even compression, the injectors were new and there were no recent fault codes. Yet the engine was knocking and cut out unless you revved it, when it did run, and as the customer said, it improved to the point that it would tick over once warm.

It was time for a cup of tea, to reflect on what we knew, we didn’t know and what we needed to know.

Taking time to process the information gives you the ability to plan the next step in the process more efficiently. I tend to prioritise tests in two ways, how easy is it to perform & how much value will it add? In this case, measuring the rail pressure was easy using live data (equipment) and rail pressure is fundamental to the correct running of the engine. So, it was an obvious next step.

Similarly, air, coolant and fuel temperature values are also low hanging fruit but offer less value. Injection control is also critical to the correct operation of the engine but is much harder to test.

The rail pressure via live data at idle was 423.16 Bar, the specified pressure was 421.50 Bar. So, taken at face value, the rail pressure appears to be correct. But remember the Diagnostic Triangle? Previous experience (knowledge) of this system suggests that the rail pressure should be around 285 Bar at idle. A quick search of previous vehicles with the same engine code produced a data capture to confirm this, see Figure 1 above.

What it doesn’t tell us is why the commanded rail pressure was so high. Back to the planning stage of what we know, don’t know and need to know. As always, we begin with the easiest test with the most value. Fuel quality, fuel supply flow and low-pressure tests. We ‘needed to know’ what the low-pressure supply should be and used the AllData platform to gather the information. Two systems could be fitted with either 6 bar or 0.5 bar supply pressures. Upon inspection of fuel quality, we discovered the fuel was ‘red,’ I told you alarm bells were ringing at the start. The pipes were checked for correct routing and it was noticed that the metal return pipe was kinked. Before conducting any further tests, the customer was contacted and authority requested to replace the return flow pipe from the fuel rail and for additional time to carry out further tests, including draining the tank and filling with clean diesel.

Once the parts arrived and were fitted, we tested the low-pressure supply, the gauge registered 6 bar. But was that correct? What is the difference between the 0.5 bar and the 6 bar systems? Once again information is required. It revealed that during 2011 the fuel system changed, a quick visual inspection was required to identify which system was fitted – the only difference being the flange on the high pressure fuel pump.It was noted that the replacement engine had the wide flange 0.5 Bar pump fitted. The correct pump for this vehicle is the narrow flange 6.0 Bar pump. The customer was consulted and decided to have the correct pump fitted by the garage that replaced the engine, which was still attached to the original engine.

Once again Knowledge, Information and Equipment applied in a logical process had resulted in a successful diagnosis.

Andy provides free guides and video tutorials on scoping in addition to his training courses. Check out www.gotboost.uk.