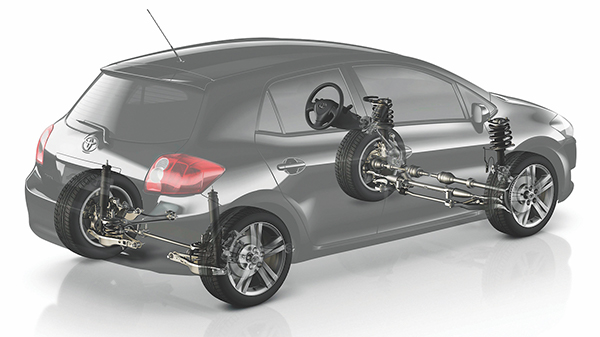 Car manufacturers spend millions developing steering and suspension systems, correct alignment of which is crucial to maintaining the intended dynamics. Rob Marshall looks at the basics of suspension geometry to understand why it is so important.

Traditionally, ‘alignment’ tended to relate to either the headlamps, or the positioning of the road wheels. While some motorists might notice that their lamps have become misaligned, by either poor visibility, or from the flashing main beams of dazzled oncoming motorists (unless the MOT Test has identified the defect beforehand), the gradual deterioration in their car’s handling tends not to be spotted as speedily. The first problem might be highlighted by a garage visit, where you have to inform the customer of their prematurely worn tyre treads.

The wheel alignment must be adjusted correctly, in order for the car to run true, not be unstable and to ensure an optimum tyre life. Additionally, the steering must not become excessively heavy, but possess a certain amount of self-centring and feedback, without the driver experiencing excessive forces through the steering wheel. As with all engineering, a delicate balancing act must be optimised to meet the car maker’s requirements at the development stage. Yet, while basic physics remains unchanged, modern technology has made significant differences. Electric power steering (EPS) can be tuned to dial-in artificial feedback, which masks undesirable physical traits that chassis engineers can use to their advantage. For example, a designer might wish to design-in a strong self centring characteristic that gifts both decent steering control and accuracy but the downside of heavy steering at parking speeds can be camouflaged (aside from the chassis dynamics engineers manipulating the camber angles) by the EPS.

Manufacturers do not always get the balance right, however, and even some of the latest models have steering that still feels artificial, or inert, to more experienced drivers. Additionally, while certain vehicles might appear to have very good handling and ride characteristics, unusual tyre wear might be the trade-off, which the manufacturer (and dealer) might dismiss as ‘normal for that model’.

Thrust angle is the most critical measurement. It is akin to a boat rudder. It confirms that the rear and front of the car are aligned. Many cars cannot have their thrust angle adjusted but, where adjustment points are available, you will manipulate the rear toe reading to restore the original setting. Ideally, therefore, the thrust angle on a modern car should be zero. Once the thrust angle is verified as correct, you can check the other angles.

Until recently, alignment of suspension and headlamps were considered separately. Newer vehicles increase the likelihood of these systems being interlinked, so be wary if you encounter a car that is equipped with self levelling and swivelling HID lamps, or matrix LEDs. Consider ADAS also, in that any adjustment made to the suspension geometry is likely to dictate that a separate ADAS alignment will also be necessary as part of your duty of care.

Think of caster as the ‘control’ angle. It influences handling and ‘feel’, mainly. Imagine a line drawn straight down the centre of a tyre, top to bottom. Then, imagine a second line that passes through the centre of the suspension’s top and bottom ball joints. Should the top of the second line point towards the rear of the car, it has positive caster; if to the front, negative caster.

Increasing positive caster enhances high-speed stability but the EPS can be tuned to make the downside of increased steering effort less noticeable. Crucially, caster provides the self-steering characteristic; i.e. the property of a steering wheel returning to a straight-ahead position. Interestingly, caster angles that differ between the left and right sides of the vehicle introduce steering bias, or ‘pull’. While this can be undesirable for the driver, because of the continual correction effort needed at the steering wheel to keep the car in a straight line. Some European cars that have had suspension optimised for driving on the right can suffer from ‘pulling to one side syndrome’, when faced with driving on ‘our’ side of the road. Even if alignment checks show the caster angles to be within tolerance, there may be options available on some models to adjust the caster to compensate for the tilt, or camber, of our roads that is different to that encountered on the continent.

Think of camber as working to keep as much of the tyre in contact with the road as possible. It assesses how much ’tilt’ there is at the top of the tyre, which will either be inwards (negative camber), or outwards (positive camber). Camber influences mainly steering weight and feedback. Virtually all modern standard road cars are set with negative camber, because it enhances cornering stability. The chosen caster angle setting influences the camber angle of the outside tyre under corning loads as well, because it promotes a greater tyre contact patch on the road, thus enhancing grip. In theory, for straight-line driving, having the tyres vertical to the road is ideal, meaning that the perfect camber angle for that situation would be zero. Yet, again in theory, because manufacturers wish to reduce rolling resistance for eco reasons, a negative camber angle reduces the tyre contact patch, therefore increasing fuel efficiency.

Back in the real world, driving conditions dictate that compromises are made not only relating to roads but also tyre and suspension characteristics. For example, aftermarket lowering affects the camber (and toe angles) significantly, although aftermarket plates and bolts can restore the factory camber angles, relative to the new suspension height. As running a car with non-standard camber angles can prejudice the handling and road-holding severely, it is worth passing-on this advice to the car owner, who believes that ‘lowering’ the suspension alone will reap improvements.

As ‘tracking’ relates to the relative angles of a pair of tyres, ‘toe’ is the preferred terminology, because it assesses each wheel individually. Technicians are more likely to be familiar with toe, because it can be adjusted on all production cars. Yet, be wary that incorrect caster and camber will also influence the vehicles’ cornering and straight-line characteristics, as well as tyre wear rates.

Toe describes how effectively a vehicle ‘tracks’ in a straight line, without the tyres wearing excessively. While it is logical to set both front wheels of a production car parallel to each other, this is not possible in the real world, because of the forces moving them away from the parallel position, as the car is driven. Note that the camber angle influences toe, yet toe does not influence camber. For rear-driven cars, the front wheels tend to splay out slightly; front-wheel drive cars have them drawing inwards. Setting them out-of-parallel compensates for this characteristic. Therefore, FWD cars tend to be set with a degree of toe-out, RWD, with toe-in.

Naturally, with suspension alignment all is not as it seems and the topic is complicated further by wear. So, sagging springs and worn bushes will make it impossible to set the alignment accurately. Working on cars that deviate from the original specifications will also complicate matters further. However, as this article describes the very basic theory about suspension alignment, our future editorials on the topic will look at the real-world challenges that the aftermarket technician faces, when seeking to adjust alignment either as a routine check, an upsell, or as part of a more involved repair.