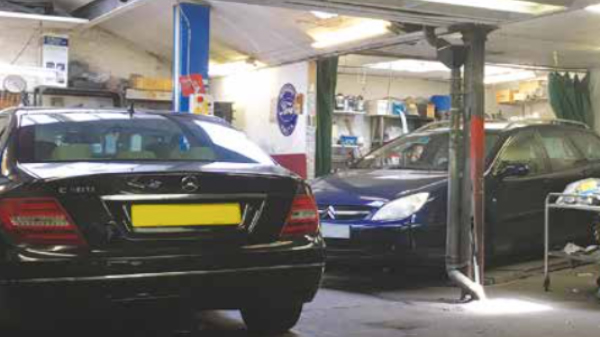 Apprentice one day, workshop owner the next

Tony Marco of Mountgrove Garage in London was inspired to write in after reading about James Etherington opening his own business in the March issue. Like James, he took the plunge and decided to run a workshop rather than be employed in one, but Tony was just 21 when he took over his boss’s workshop! Here’s Tony’s story…

I remember as a kid my dad showing me how to strip wires and solder components together – he used to say, “If you can take it apart and see out it works, then you can fix it”. I think having this mindset of being able to work out how mechanical components work in order to repair them and not give up, has helped me in my career and in a way of life too.

“Back in 1994 I was 15 years old and by chance, I got a Saturday job at the garage down the road from me. I started off as all apprentices do – making tea, putting tools away and washing customers cars. After a few months, I got my first promotion. In addition to my usual chores, I was allowed to take wheels off. I couldn’t use the airgun though, I had to do it the hard way so I would appreciate the easy way. So, I kept my mouth shut and did as I was told, I think I was being tested to see if I would quit. I stuck with it and helped the ‘old school’ mechanic they had there, passing him his tools like a surgeon in an operating theatre.

“You can study how much you want but unless you can put it into practice, it doesn’t account for much. A service manual will tell you turn off the 13mm nut anti clockwise but what do you do if the nut is rusted on or it sheers off? Working alongside the old boy taught me not just to use brute strength all of the time, sometimes you have to tease the bolt out. This hands-on experience made a real difference and I’d advise anyone who wants to enter this field now to get out there and get their hands dirty.

“My first solo job was on a Fiat Uno that had been booked in for overheating. My boss told me to work out what was wrong with it. As I opened the bonnet, I remember feeling impressed with the responsibility. It didn’t take long to work out that all of the water had leaked out from the radiator.

My boss instructed me to remove it and he ordered a replacement one in. The job was signed off and I remember walking home that day with the biggest smile on my face and a huge sense of achievement. I went on to study electrics in college but kept my job in the garage, increasing the number of days I worked there.

“When I was 21, my boss decided to sell up, so I struck a deal with him. With some financial help from my family, I bought the garage that I had worked in for the last six years. It was tough. I went from working there part-time to six days a week and being the boss pretty much overnight. We barely broke- even some weeks and, while most of my friends were out partying, I was running a business.

“I remember handing over a customer’s invoice one day and he gave me a tap on the back and said, “You’ve done well. I remember a few years ago giving you a £2 tip to wash my car and now you’re giving me a £200 invoice! You should feel proud of what you’ve achieved.”I think that put it into perspective for me as he handed me £200 and gave me a £5 tip!

“After some years, business picked up and my brother Alex joined me and he started to learn from the same old boy that taught me. We now run a successful family business and we’re highly recommended in the area and very busy. As cars have progressed, so has our business. We’ve taught ourselves about diagnostics and how to do bodywork and painting. We have always had one rule that we stick by and that is, if we’re not completely happy with the job, we won’t give it back to the customer. I know some garages that give the car back to the customer hoping the fault does not return, which is bad for business and the industry as a whole.

Tony and his brother work in the garage full time and the mechanic who showed Tony the ropes 23 years ago still works there part-time. Tony’s dad is also on hand to test drive vehicles and pick up parts when needed, so it’s a real family affair at this neighbourhood garage in Finchley Park. They will take on most jobs that come through their doors, working on cars that are at least five years old. They have invested in training and equipment over the years to enable them to take on body repair and stay on top of the diagnostic side of things. “If we start getting jobs in that we are unable to do, we go away and do our research, go on training, buy the right equipment… We have a Snap-on scan tool and we’re looking to get the VAG and Ford dealer equipment in the near future to specialise in those and do as much as we can on the other brands”.

Work is booked in a few days in advance and emergencies taken on as and when. They have built up an extensive database, which they use to remind customers of an MOT or service that is due as well as recommendations of parts that are likely to be in need of replacing. The system was developed with the help of a friend who is a computer programmer. No automatic reminders are sent out by text or email as they prefer the personal touch, calling customers to explain what is due to be done.

I asked Tony about the challenges they have faced in recent years and the most prominent for him was the impact of technology on diagnostic work. Before vehicles became laden with electronics, Tony remarked that you could often work out was what at fault solely based on your experience, which is just one part of your armoury nowadays. “You have to be sure that the expensive part you are replacing is going to solve the problem”

Tony sees himself working alongside his brother for years to come and they have no plans to retire any time soon. But his bold decision to take on the business at such a young age, in an affluent area of London, has truly paid off. They own the freehold outright on the workshop, having purchased it so many years ago.

A similar size workshop in the area recently sold for £700,000. After congratulating him on his brave life decisions I ask if he had any regrets? “With hindsight, I could have done this or that differently and been a few years ahead but then I wouldn’t have gained the experience, and you can’t put a value on that really.”