The problems with GDi engines are well documented, but the causes are not. Unless you find and correct the source, they will return.
Problems are not caused by any one failure or feature. They are not due to the vehicle design or because of any design failure of the components used on the vehicle. Although the fuel does have an influence, that alone will not be the sole cause, however, add them to the driving conditions, traffic queues, speed humps, short stop/start journeys and the different fuels available, and you have the ingredients for failure. Solving problems requires the attention of a professionally trained workshop with the correct equipment, to diagnose the cause and provide the fix.
“Fuel trim adjustments are not correcting the cause of the problem, only compensating for
it. You need to find the cause of the problem to fix it.”
DELIVERY AND FUEL TRIMS
The injector’s basic requirement is to supply a metered amount of fuel in a specific
form at a time and for a duration requested by the vehicle’s ECU. A port/manifold
injector typically works to a 14:1 Air/Fuel Ratio, whereas a GDI injector is working to
a 40:1 ratio and some of the Piezo injectors are working as high as 60:1 ratio.
The loss of any fuel at these levels can and will have an adverse effect on the engine. To
counter this, the latest adaptive engine management systems have been designed to
adjust the ‘fuel trims’, controlling the fuel delivery to each cylinder to maintain an equal
delivery. An adjustment of up to 15% can be made to the fuel delivery of each injector
on some systems but, as there are number of measurements that contribute to the fuel
trim adjustment, these measurements cannot adjust or correctly compensate for poor
fuel distribution and atomisation. 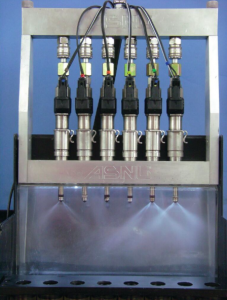 The fuel trims compensate for the difference in fuel deliveries; they do not correct what has caused the fuel delivery to change. Whatever has caused the change in the fuel will need to be investigated when the problem becomes a long-term issue for the system, highlighted
by a warning on the dash panel. The distribution and atomisation on a GDI injector is critical to maintaining the correct performance, fuel economy and exhaust emissions. They are now even more important than the quantity of fuel being delivered by the injector.
DIAGNOSIS BY REPLACEMENT IS OUT
For 90% of the motor industry, keeping fully up to date with technology is nigh on impossible.
Technicians could spend at least 10 working days of a month being trained on the new technology and still have more to learn. It’s just not cost-effective. Most technicians learn from a
mixture of experience, the internet, ‘having a go’ and relying on the equipment they are using to
do the job for them.
You have probably already removed injectors from a port/manifold engine without any major
problems. Most are pretty simple and can be removed in 10 to 45 minutes. Information on
these injection systems is quite easy to find and follow – many workshops employ the ‘diagnosis
by replacement’ technique for this very reason. However, with GDI injectors, it’s a different
scenario. Firstly, their location is an issue, as a direct fit to the combustion chamber, they are
not so easy to remove. Secondly, because of the engineering required for a GDI injector, they
are not cheap. With GDI injectors, diagnosis by replacement is simply not cost effective.
SAFE REMOVAL OF GDI INJECTORS
GDI injectors are, like all injectors, built with micron tolerances on the internal operation of the injector. The long shaft required to get the fuel into the engine is robust,
but no match for a mechanic with a lever bar.
Over the years, the ASNU team have seen many different types of problems with GDI
injectors. Some with broken pintles, broken springs, coil failure, seizures due to excess heat, misuse and abuse, carbon deposits and damage caused by either removing or refitting
of the injectors. If the mechanic levers against the injectors to get them out, they can twist or bend the shaft of the injector. Moving the shaft even just microns can stop the ball from returning to its seat, causing the injector to leak or even remain open.
Removing GDI injectors should always be carried out using specialist removal tools. It is possible to remove some injectors without these tools but the likelihood of damaging the injectors and the costs involved in replacing them, makes the use of specialist tools the only logical option.
Phone: 0208 4204 494
Email: phil@asnu.com
ASNU’S CLASSIC GDI KIT 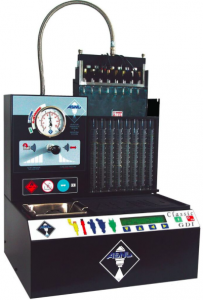 The ASNU Classic GDI Injector Diagnostic Testing & Servicing System allows you to compare injector performance safely. It can be used by apprentice level mechanics as well as Master level engineers.
On a vehicle fitted with a GDI system, the fuel pressure will operate at a potentially dangerously high level for the inexperienced, reaching anywhere between 75 and 200 bar. To enable a safe and easy examination of the injectors’ performance, the ASNU kit runs the injectors at a lower and safer operating fuel pressure, up to a maximum of 10 bar. Testing at low pressure also makes examining the free movement of the pintle easier; high pressure can mask the free movement.
The Engine Management System of a GDI is designed to open the injectors for micro-second durations. With a maximum opening duration of only five milliseconds, any visual analysis of the injectors’ spray patterns could be both difficult and dangerous. When mounted on the ASNU Classic GDI, the injectors are being supplied with the correct peak and hold currents and firing in sequential mode, simulating those of the vehicle’s ECU.
The ASNU system allows the user to safely examine the injectors’ spray patterns in greater detail, looking for any discrepancies in the fuel distribution and atomisation.
In some operating modes, the ASNU system opens the injectors for a much longer duration, thus exaggerating the spray pattern and making it easier to examine performance.

COMING UP:  In the September issue of Autotechnician, ASNU considers GDI technology

and injector diagnostics, with regards to flow rates and spray patterns. We’ll turn theory into practice, featuring a case study on an independent garage who has already taken the GDI plunge to find out if the investment has been worth it.