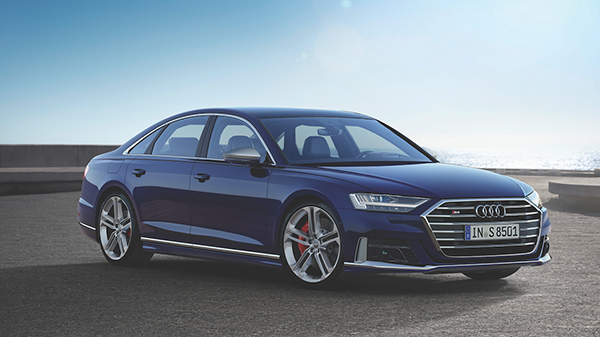 Audi S8: The iron fist in a velvet glove approach to super-luxury

For its flagship models, Audi, the luxury arm of the VW Group, has seldom wielded less than a sledgehammer to crack a nut and channelling a whopping 566bhp/590lbs ft, its bi-turbo V8 petrol engine needs every ounce of its active suspension, four-wheel-steer and quattro 4×4 drivetrain to manage the technology, which is more evolutionary than revolutionary. Audi suggests that it ‘knows its customers’ and the low-volume S8 is performance but not techno-orientated.

Audi needs to offer a sop for the dinosaur impact of its potent 4.0-litre petrol V8 engine and it does so by employing mild hybrid technology (MHEV) that has been inherited from the A8 model. A 48v belt driven alternator starter, using a boot- located, 0.25kWh lithium-ion battery, enables the engine to switch off between 34mph and 99mph every time the throttle pedal is released (dependent on the 48v battery’s state of charge). Yet, this technology is not novel and this MHEV is not of a ‘plug-in’ type, it cannot move under EV power alone and relies on the movement of the car above 14mph for recharging. The S8’s average MPG is quoted as 25mpg. Audi claims that this 48v MHEV system will be rolled-out in every new future model. 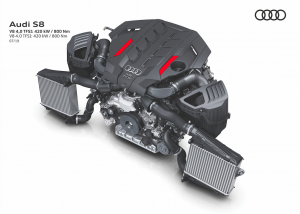 By using iron-lined cylinder barrels in the aluminium crankcase, friction is reduced for smoother running. A ‘cylinder on demand’ system, also used by other divisions of the VW Group, that deactivates individual cylinders in low-load conditions, is also employed. Yet, Audi cannot help itself and for moments when punch takes precedence, automatically actuated flaps in the exhaust system accentuate an impressive V8 soundtrack. Providing another sop to comfort, sound intrusion that is less desirable is eliminated by an active noise cancellation system integrated into the stereo. 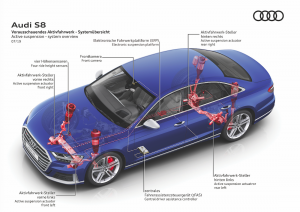 For its suspension, just being ‘adaptive’ is insufficient at this level, so the new S8 employs ‘predictive’ active technology that works in conjunction with the adaptive air ‘springs’. The active system can raise, or push down, each wheel separately using electromechanical actuators that Audi UK informs us is not a 48v system but is powered by the car’s standard 12v battery. The predictive aspect comes from the front camera that sights road irregularities and adjusts the ride height, pitch and even roll settings, using parameters learnt from almost 1m miles of testing, to smooth out progress…again, this tech is not new and has been seen in other models.

Naturally, the expected Audi driving mode selector is fitted. In the fifth of the six settings (Comfort +), it engages with the suspension and tilts the body positively by as much as three degrees to reduce lateral acceleration on occupants. In ‘Dynamic’ mode, the 5.2m long, aluminium-bodied and spaceframe saloon behaves like a sports car, resisting body roll but also engaging with the all-wheel steering system to neutralise any wayward body movement. Incidentally, the active suspension also enables easier entry to and exit from the passenger compartment, by raising the ride height by up to 50mm, when the door handle is pulled.

As for the electro-mechanical all-wheel steering, again there is nothing new to reveal but it does enable quick responses and a tighter turning circle at lower speeds, with the rear wheels turning in the same direction as the fronts. By steering them in the opposite direction at higher speeds (above 15mph), greater stability results. The transition is managed automatically by a separate electronic control unit.

Of course, Audi’s renowned quattro 4×4 technology, driving through an 8-speed ZF automatic gearbox, is applied to the S8 for maximum traction and chassis control. Other luxury carmakers are using up to 10-speed auto-boxes but Audi feels that its torque spread is better suited to the 8-speed unit’s capabilities. A torque-splitting facility eradicates any traces of understeer, or oversteer, in conjunction with the stability control electronics. If the standard dinner-plate sized brake discs are deemed insufficient at hauling-up over 1.8-tonnes of S8, a ceramic brakes option, with ten-piston front callipers, that is also 9.6kgs lighter, can be specified.

The S8’s hide-wrapped front power seats offer the usual fore, aft and up/down adjustments that also include pneumatically adjustable side bolsters and separate three-stage heating for each seat. Ventilation and massage functions are cost options. There are no less than 38 ADAS systems, providing conditional level three autonomy, divided into both City and Tour packages. They include adaptive cruise assist, traffic jam assist and lane tracking but, in combination with predictive efficiency assist, braking and accelerating in anticipation of what lies ahead is part of the package. The City assist program takes all known crash mitigation information into account to provide a notional safety cell around the S8. Audi calls it ‘Pre sense 360°’. If it detects an impending side impact, it can operate together with the predictive active suspension to raise the body instantly by as much as 80mm, thereby raising the sill height for the more effective absorption of impact energy.

There is a high-speed processor ‘brain’ behind the ADAS systems in the S8 (which Audi refers to as: zFAS). About the size of a tablet computer and stored below the boot floor, it is solely responsible for processing all data from a comprehensive model of the vehicle’s surroundings based on information provided by each of the sensors. There are five radar sensors, six cameras, twelve ultrasound sensors and a laser scanner on board, each feeding the zFAS, which then interprets and acts upon the information received. 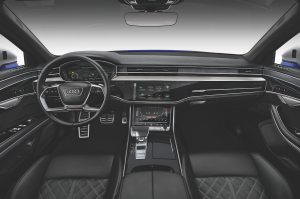 While it should be reliable, advanced electronics can lead to nightmare maintenance scenarios.

Featuring two large digital touchscreens in the centre stack, the Audi S8 provides the driver with adjustability over nearly all functions. They also incorporate haptic feedback, while the system also uses natural speech control. Alexa, Amazon’s cloud-based voice assistant, is an option to the self-learning and improving Audi software and it saves an array of questions, answers and even speech forms to the cloud, as part of its learning process.

All driving-relevant information appears ahead of the driver, in the Audi ‘virtual cockpit’, the multi functional display that can be switched between two views. While the rev-counter and speedometer are displayed as large dial-type gauges on the LCD screens in driving mode, the map is the centre of attention in infotainment mode. Both views have S model- specific red graphics. A special S-performance layout for the instrument panel, where the central focus would be the tachometer, displayed as a square graph, with the output and torque shown as percentages, can also be selected using the on-board computer. Additionally, there is a head-up display (HUD), on which can be shown important, or emergent, information.

Audi’s MMI Navigation-plus serves as the infotainment and media management centre and, drawing on the ‘swarm intelligence’ of all similarly connected Audis, car-to-car, online traffic sign information, hazard alerts and even parking search functions are available. Finally, a ‘myAudi’ app connects the car to the customer’s smartphone so that they can send destinations to the car from their home computer more readily. Of course, all this technology does not come cheap and the new Audi S8 could cost around £100,000, when it is launched officially in late-September.

Summary: While Audi has adopted an accessible potency route with its new S8, it is unusual for a range- topping premium German saloon to feature a lot of the technology that is far from innovative, despite the car’s high specification. We know that the company is not avoiding EVs but Audi knows its market and it is clear that its high-end customers prefer engineering traditions and not new-fangled tech. Of course, a relatively rare model like this has the potential to be a nightmare to repair, should something go wrong, by the time it reaches its tenth birthday. Fortunately, as with big Mercs and Bimmers, the level of aftermarket support is going to be crucial.