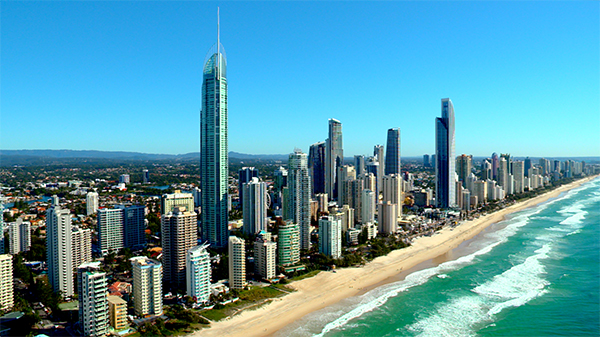 British technicians are in demand down under – we look into the hows and whys and speak to Callum Casserly, who upped sticks and made the move to the Gold Coast.

The Australian government has a recognised need for more trained motor mechanics, and Blighty’s a prime hunting ground. British techs and their families – attracted by the salaries, job prospects, respect for the profession and let’s face it, the weather – might be tempted by a new life in the sun. But do the facts stack up?
There’s no doubt that Australia has a shortage of trained, competent mechanics. At the time of going to press, the Australian government’s website’s list of in-demand occupations included Automotive Electrician, General Motor Mechanic, Diesel Motor Mechanic and Motorcycle Mechanic. In terms of jobs for partners or friends wishing to accompany you, there are plenty of other occupations in demand. If your partner’s job isn’t listed, they could still apply to emigrate via sponsorship from an Australian employer who wishes to offer them a job.
Given the skills shortage and the distances many Australian motorists have to travel for repair across a diverse and often challenging landscape, it seems there’s a healthy respect for the profession there too. But being appreciated isn’t the only perceived benefit of emigrating. It’s claimed that Aussie technicians can expect an improved salary bracket with, on average, an extra £7,000 per annum in wages (£26,000 versus £19,000). The working week is broadly similar too, at 41 hours for the average Australian motor tech. What’s not to like?
The process itself of migrating to Australia can seem quite daunting. The Australian government’s website is the place to start. Be wary of sites that appear to be official as many are not, they are selling you a service and should, legally, state as such. Having said this, many would-be emigrants do choose to pay a specialist agency to assist them in completing the required steps. This can be expensive and doesn’t guarantee success but, in theory, it should take away some of the ambiguity and stress.
THE PROCESS IN SUMMARY:
• Check your profession is on the Skilled Occupation List (SOL) and note the reference number.
• Check you meet the eligibility requirements of the visa subclass you are interested in.
• Undertake a skills assessment that meets the requirements of the relevant assessing Authority for your occupation.
• Complete an Expression of Interest via the online system ‘SkillSelect’.
• If you are invited to apply for a Skilled Migration Visa you’ll have 60 days to lodge your visa application, including being able to prove you meet the skills assessment.
Skills assessment: The skills assessment enables the Department of Immigration and Border Protection to
judge whether you have the required level of skill in your chosen profession to practice in Australia. Mechanics must prove they can make an immediate contribution to the skills shortage. The assessment must be undertaken before completing the Expression of Interest.
Visa requirements: There are a few different types of visa you could find yourself eligible for, depending on your
circumstances. If it’s the Skilled Independent Visa you’re applying for, there are a number of criteria to be met.
For example, you must be under 50 years of age, have at least competent English, score at least 60 on a Points Test, and meet the health and character requirements, as well as following the process as described in the summary above.
It’s suggested that you don’t apply for jobs in Australia until you have your visa. And if you do go, don’t forget the sunscreen. For more information, visit www.border.gov.au
THE NUMBERS GAME
• The UK has two mechanics for every square mile.
• Australia has one mechanic for every 30 square miles.
However, much of Australia is unpopulated. What else can we use as a measure?
• There are 18 million registered motor vehicles in Australia, against 34.5 million in the UK.
So, Australia has fewer vehicles but, when you take into account the vastly different populations:
• Australia has 78 vehicles per 100 people and the UK has 54 vehicles per 100 people.
So the Aussies have more cars per person requiring maintenance and repair.
• In terms of the number of registered vehicles, the UK has around 165 vehicles per mechanic, and Australia has 183 cars per mechanic.
And what about wages and the cost of living?
• Australian mechanics typically earn £26,000 – £39,000.
• UK mechanics’ pay scales tend to be lower at £13,000 – £28,000.
• The cost of living varies greatly between the Australian states and this should be a consideration when you decide where to base yourself. Generally, the cost of living is cheaper in the UK, with London being the most obvious exception.
WEATHER COMPARISON
• Temperatures and rainfall vary greatly across the territories.
• In Sydney, Northern Australia, there’s a summer high of 26 degrees and a winter minimum of 8 degrees. There are 104 clear days a year and annual rainfall is similar to the UK.
• In contrast, Adelaide in Southern Australia, has highs of 29 degrees, winter lows of 7 degrees, and only 87 clear days a year. However, there’s far less rainfall, with 551mm per annum.
• Wherever you make home in Australia, you are pretty much guaranteed more sunshine across the winter months.
CONSIDERING TAKING ADVANTAGE OF AUSTRALIA’S SHORTFALL OF GOOD TECHNICIANS? WE SPEAK TO CALLUM CASSERLY WHO DID JUST THAT AND MOVED FROM THE SCOTTISH LOWLANDS TO THE GOLD COAST OF AUSTRALIA BACK IN 2015
Callum started out as a Vehicle Systems Technician with Mercedes-Benz in Hamilton, a town in the central Lowlands of Scotland. After completing a four-year apprenticeship, which culminated in Callum being awarded Apprentice of the Year, it was time to take on a new challenge at Caterpillar, working on heavy plant vehicles. 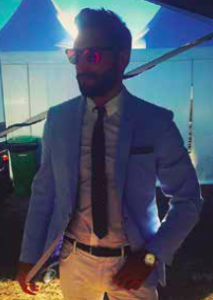 One year later, an opportunity arose to open up his own workshop, IMS Engineering (Scotland), alongside his brother, who had also trained in automotive engineering. They specialised in engine rebuild and repairs and continued to expand through uncertain economic times in the UK, Callum recalls: “Running our business allowed me time to pursue my other interests away from mechanical repairs and one interest that really took off for me was modelling. I found myself successful in both catwalk and photo shoot modelling both in the UK and in Los Angeles. I have continued this work over in the Gold Coast, doing a number of photo shoots for Prada.
How did the idea of emigrating overseas come about?
“I had watched a programme online about the East coast of Australia, with its amazing beaches and lifestyle. This inspired discussion with friends on Facebook who had moved to other parts of the world, they told me to just go for it. I did some online research, found Mercedes-Benz on the Gold Coast, sent my CV off then went to bed! In the morning, I had an email inviting me for an interview. A few phone calls at 3am followed and within two days I
was heading off on my first trip to Australia.
“When I finally arrived at the Airbnb room I had booked from the UK, I was lucky to find myself in the home of a very nice family who helped me find my way around those first few days. I went for my interview and having the European qualification, I was offered the job, to start on the Monday! Of course, I couldn’t start so soon as I had things to tie up at home first. I basically jumped back on the plane, threw out all the stale bread in my house, packed my shorts then flew back to start my new adventure.”
How did you find the process of obtaining a visa? 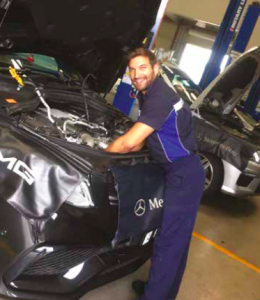 “I have been very lucky to have a large franchise behind me – a great advantage when applying for a working visa. The process was very smooth, although the three month wait seemed like a year! I now have a ‘457 work visa’ (the Australian Subclass 457 Work Visa allows Australian and overseas employers to sponsor an immigrant worker to enter Australia for up to 4 years to engage in skilled work – Ed). After a period of time, I can change this for a residency visa.”
How different is the pace/quality of life?
“The ethos on the Gold Coast is one of ‘work hard, play hard’. Days start early and I usually spend my evenings after work relaxing in the hot tub out back! The major benefit of the good weather is you can plan for outdoor fun at the weekend – heading off in the boats and jet skis to one of the local islands for swimming, snorkelling and picnics.”
What are your future plans?
“I know the importance of keeping my qualifications up to date and I will continue to do this. Beyond that, I am an adventurer, so I will continue to enjoy the journey I have started and who knows where it will lead. Travel is the only thing you can buy that can make you richer.”
Without wanting to invoke too much jealousy, what do you do for fun?
“I have a genuine interest in all things mechanical and this extends into my hobbies, which includes building and racing saloon cars and bikes – I can now add jet skis and boats to that list since moving to Oz! I enjoy mountain biking and have had a lot of fun on the many trails, particularly around the Nerang area.”
Can you offer any advice to readers who are considering a move overseas?
“Keep yourself up to date with training and your European qualification will be greatly appreciated by companies in Australia. If you do make the move, enjoy your networking – it will open up new experiences and help you to meet your new friends. Also, have a great time exploring a new country!”
Tags: Australia, Callum Casserly, Gold Coast, Technicians
SHARE THIS