LATEST NEWS
You are at:Home»Article»Autodata gives an overview of the 48V mild hybrid system

Unlike true-hybrid configurations that use the engine and/or electric motor to propel the vehicle, the 48V mild hybrid system is used in a typical stop-start vehicle with the integration of a 48 volt electric motor/generator assembly to supplement the engine, improving acceleration and enhancing fuel economy. Electrifying components such as the air conditioning compressor, power steering pump and engine oil pump further reduces the engine load and increases fuel efficiency. 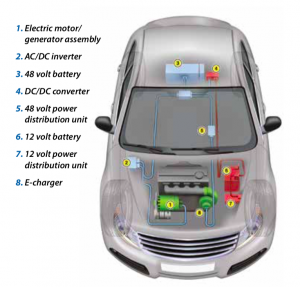 The automotive industry contemplated using a 42-volt system in the 1990s but was later dismissed due to cost concerns and practicalities such as switches and relays prematurely failing. Driven by environmental concerns, modern electronics make use of transistors, diodes and microswitches which are more robust, making this a more viable option. Why stop at 48 volts? Current regulations state anything over 60 volts officially becomes ‘high voltage’. This adds extra cost due to expensive shielding, connectors and conduits like the orange ones commonly seen on many hybrid and electric vehicles. Yet, this doesn’t mean the electrical architecture of the entire vehicle will move to 48 volts. The conventional 12-volt supply is still used to power many of the standard circuits. The common 48V mild hybrid consists of a small number of additional components: electric motor/generator assembly, AC/DC inverter, DC/DC converter, a 48V battery and an e-charger.

DC/DC converter: As this vehicle encompasses both 12 volt and 48V systems, a DC/DC converter is installed to reduce the electrical voltage from 48 volts to 12 volts.

48V battery: The lithium-ion 48V battery is generally located in the rear of the vehicle. Just like the electric motor/generator, it can use the cooling system to dissipate heat.

Vehicle manufacturers are already developing other intelligent enhancements to compliment the 48V system. The following are just some examples:

• Extended stop-start technology: This system will also switch off the engine when approaching a stop or while the vehicle is cruising at a constant speed.

So, while the current 12 volt system struggles, compared with other more expensive true hybrids, the 48 volt mild hybrid technology offers a cost-effective solution in satisfying emission regulations and future increases in energy-hungry electrical components. The use of 48 volt technology is set to grow even further as stricter CO2 emission targets are set and the decline of the internal combustion engine continues. With the growth in popularity and demand for HEVs and EVs, Autodata is rolling out drive system diagrams for electric and hybrid vehicles.