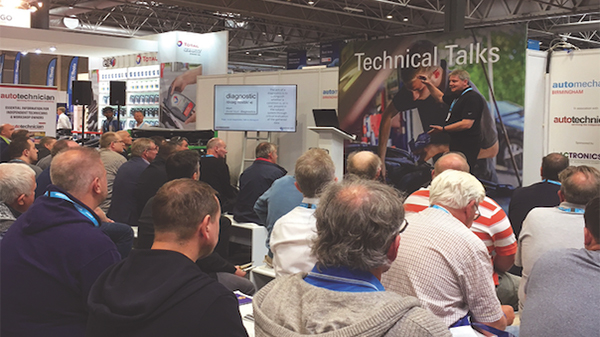 More than 10,000 visitors are said to have attended last month’s Automechanika Birmingham event, reporting its new Garage Quarter as a major draw for independent workshops. Autotechnician hosted Technical Talks within the Workshop Training Hub, delivering presentations on the latest technology and workshop opportunities from the likes of Castrol UK, Delphi Technologies, ACtronics, Ecobat Technologies and Elta Automotive, as well as diagnostic advice from James Dillon, Andy Crook and Frank Massey.

The event featured 500 exhibitors from 26 countries, covering a total floor space of 9,400 square metres. It returns to the NEC again in 2019, before moving biennially to alternate with Automechanika Frankfurt.

Wendy Williamson, chief executive of the Independent Automotive Aftermarket Federation (IAAF), provided an insight into the future of the automotive aftermarket. Her presentation covered the changing face of UK parts distribution and legislation. Williamson also noted how lifestyle changes will affect the trade in the future, saying: “Ownership of vehicles will change; renting vehicles by the day or even the hour will become more popular, particular among the younger generation.”

The speech revisited Type Approval, an ongoing theme of IAAF’s lobbying activities for the past three years. Williamson said IAAF has “fought hard to ensure a number of key amendments were included in the final legislation,” which was approved last month by the European Parliament.

Brexit was also a key issue, with Williamson reminding delegates that all EU legislation will be adopted in the UK as of March next year, but as Type Approval legislation doesn’t take effect until September 2020, “it now throws up a question of where this legislation now sits.”

Williamson concluded: “We as a sector need to ensure we keep up to date with the times. We must continue to invest in tools, equipment, people and of course training to ensure we’re able to cope with the myriad changes that are taking place in the automotive industry. We have a reputation for finding a way through – the threats are more complex but we’re certainly up for the challenge.”

Autotechnician filmed the first day of the show and spoke to several suppliers, trade bodies and visitors about pertinent issues, new equipment and support available. Head to our Facebook page, YouTube channel to see what they had to say.