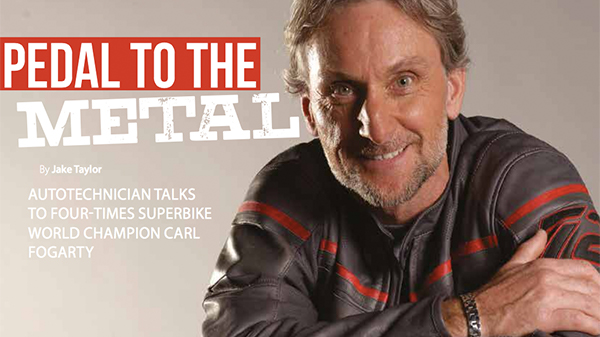 With his aggressive style and unrelenting drive to win, Carl Fogarty made sure his name will forever be etched into Superbike history as one of the sport’s greatest- ever riders. Now retired for over a decade, the four- times World Champion has relinquished a little of that individualism that pushed him to total dominance on the track.

It wasn’t just the breakneck cornering style and fierce on-track competitiveness that made Carl Fogarty one of the world’s most iconic Superbike champion. Sat astride the famous crimson of Ducati for the majority of his unmatched career, Foggy seemed to exude a charisma that endeared him to the hearts of avid followers of the sport and general petrol-heads alike.

But perhaps his greatest foray in the eye of the wider British public came a fair few miles away from the tracks and courses where he consistently rolled over hopeful competitors: the ego-filled rainforests of ITV’s I’m a Celebrity…Get Me Out of Here!

“I’m just an ordinary lad from Blackburn and I think that came across when people saw me in I’m a Celeb,” the 52-year-old explains in his distinctive Lancashire brogue.

“I just went in to see if I could cope with the boredom, the food and the other people. They were the three reasons I went in for and I was surprised how well I did do, really. I thought ‘sod it, everyone’s going to be probably hate me…’ and how wrong I was!”

A natural-born winner, Foggy took home the crown of King of the Jungle in 2014 – the last male contestant to do so. But the laid-back attitude that had led ITV’s audience to warm to the former four-time Superbike World Champion was far from the ethos he lived by during his glittering on-track career.

“Back then, I just wanted to win,” he nods. “But that didn’t make me an easy person to be around and actually, away from racing, I was always a bit shy and quiet. I look back at how I was and maybe the type of person I was, could’ve helped me.”

Regardless of that champion spirit – which saw Foggy net 59 race victories and 109 podium finishes in 219 races – he’s quick to address the importance of the wider team when he looks back on his sporting days.

“I would say that you need three things to become world champion: The rider, the bike and the team,”  he explains. “If one of those three components are missing then you are not going to be world champion, no matter how good you are. When I left Ducati and went to Honda, one of those single things was missing and I didn’t win. There are things in the past which I regret – breaking up with a team which has cost me world titles.

“I always had my own mechanic, Anthony Bass, who we called ‘Slick’ because he just knew how I worked. He maybe didn’t get on well with the rest of the team, but he was the best for me and that’s the most important thing – to have (good) people around you and you need those people there. If they’re not, it doesn’t matter how good you are, you’re not going to win anything to be honest. All three, rider, team, bike have got to be working really well.”

Fogarty’s championship victories would not have been possible without the support of the unsung heroes of motorsport: the mechanics.

“If I had a problem with the bike chassis-wise or engine-wise and if the bike was losing power, then the mechanics would switch engines and find the problem,” he says. “If it was a chassis problem then I had a good suspension guy there or if the front-end was chattering going into turn 4 or something like that, then they would look into it.

“Nowadays it’s probably easier than it was when I was riding because you can see it on your laptops or something similar. It was more mechanical in my day than it is now and it’s more electronically-geared for problem-solving.”

A decade-long career was curtailed prematurely at the turn of the millennium in a freak collision at Philip’s Island. Having been forced into retirement, Foggy jumped the fence to join with Petronas in what he describes as the most “frustrating” Superbike experience to date.

“I learnt a lot being with Petronas and it was hard work, but again, I had good people around me and they helped with the business side of things,” he muses. “I think that if it happened now then I would probably do a better job – at that time, I felt that I didn’t really want to be around the place. I was frustrated with the project sometimes and I thought I didn’t want to be involved, but you do really because you miss being at the track on the weekends.”

Thankfully for Foggy, he’s never too far from the open road these days – even if his choice of vehicle differs slightly from the monstrous machine that led him to his 1995 championship.

“My favourite bike of all-time would have to be the Ducati 916 of 1995,”  he says. “I felt that I could do anything that I wanted to at 60mph, 90mph, at most circuits on that bike. “Nowadays, I probably ride them more than I did when I was racing, and I love my off-road riding! I have a Triumph Thruxton Scrambler, a Triumph Speed Triple R and I have a couple of KTMs and a couple of Hondas. All at 52 years of age!”

In spite of his years spent in close proximity to some of the greatest engineering minds Ducati had to offer, however, it seems the teachings and advice of ‘Slick’ and his team have only got Foggy so far.

“I love bikes, and I might just change the back-wheel and sort the tyre or change the air filter and another few bits and bobs,” he laughs. “But any more than that and I’m going to have to ask someone – and end up getting a bill for it!”

Autotechnician reader, Eddie Watterson, asked Foggy via Facebook: “How did it feel to be a team mate to the legend that was Joey Dunlop, how did it bring your career on?”

“I wouldn’t say that he helped me, but it was just a privilege to be in a team with someone like that. I remember watching a film called ‘The Road Racers’ from the 1970s and watching my dad trying to beat Joey and when Joey got his first TT win, my dad was second. So, I was always a big fan of Joey but also wanted my dad to beat him.

“Joey was a very quiet guy… I managed to beat him in his own back yard in the Ulster Grand Prix in 1988 which put me on the map a bit there, I guess, and he went on to the win the TT F1 world title, which he won five years running. He came to Blackburn when I won my first world title in 1994 and celebrated with us in my local pub. I did the same with him when he won in Ireland and have been carried out of pubs in some state at about 5am, but I enjoyed it!”

Carl will be on the road this year for his 2018 speaking tour, The World According to Foggy: An Evening with Carl Fogarty. Tickets are available online.