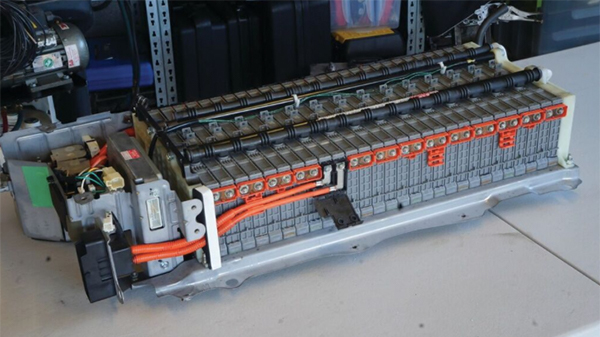 Battery failure on a Toyota Prius – by Jim Gilmour

Hybrid technology has its place in the industry; it is a way of getting diesel economy out of a petrol engine without pumping eye watering and lung clogging NOX and particulates. However, most people, including repairers and drivers, are still put off by the idea of a battery being at the centre of technology.

Our common understanding of a battery is that it has a finite life and a cost. When people are uncertain about hybrid battery life and cost, they are often given to make stuff up or repeat what others have made up.

Toyota say their High Voltage (HV) battery is designed to last the life of the vehicle, which is often received with cynicism, especially as Toyota don’t follow it up with a lifetime guarantee. So here are some truths…

The Toyota Prius is quickly becoming the car of choice for taxi drivers because of its reliability and miniscule running costs. I have come across batteries in cars that have travelled in excess of 200,000 miles and Auto Trader will bear this out – there are plenty for sale with over 150,000 miles on the clock.

A brand-new battery from Toyota costs around £850 and around £1,200 fitted by Toyota, when compared to a diesel with turbo-charger, EGR, injector or DPF issues, this is pretty cheap.

After a little chat with diagnostic expert and fellow northerner Frank Massey, I was informed that, depending on the collateral damage, a DPF issue can cost anything up to £3,500 to resolve correctly.

Earlier this year, I was asked to help diagnose a Toyota Prius with a potential battery problem. The car in question was a 2007 Prius T Spirit that had been used as a taxi. The odometer showed a little over 190,000 miles.

The engine would start and run for about a minute, every thirty seconds the battery indicator on the multi- function display would show empty and full alternately, see FIGURES 1 & 2. The Malfunction Indication Lamp (MIL) was on and the ABS and brake warning lights were showing. 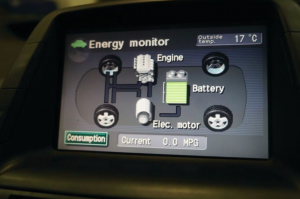 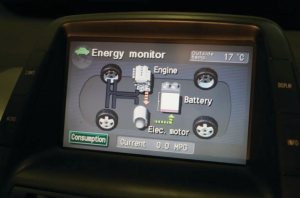 So what was going on? The battery on the Prius 04-09 consists of 28 modules. Each module consists of six Nickel- Metal Hydride (NiMH) cells, each have a nominal voltage of 1.2V giving the module a voltage of 7.2V, FIGURE 3. 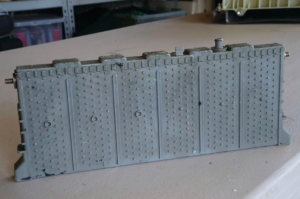 The battery consists of 28 modules connected in series giving the whole battery a nominal voltage of 201.6V. The battery is capable of putting out more than 150Amps. The potential for death by electrocution is very real.

The modules are monitored in pairs by sensor wires connected to the battery ECU. This data is then relayed to the hybrid ECU via CAN Bus. Each pair is called a block and has a nominal voltage of 14.4 volts. The actual voltage varies according to the state of charge but more important is the difference in state of charge between the blocks. It is the job of the hybrid ECU to make sure that block voltages remain within 0.3V of each other under all conditions.

The service plug is a device which when removed, disables the HV battery. The individual modules are connected in series by copper connectors, see FIGURE 4. One of the connectors is left out and instead, two cables run to the service plug holder. When the service plug (FIGURE 5) is removed, the battery is effectively split in two. 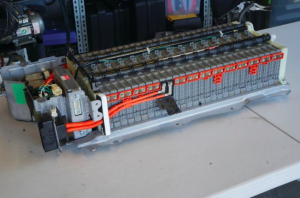 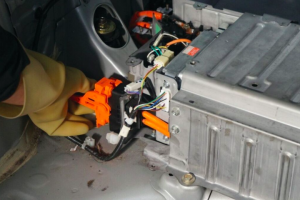 Please note, in the photograph, the battery cover has been removed for demonstration purposes. Removing the battery cover exposes a serious risk of electrocution, even with the service plug removed. You must wear the correct class 0 electricians’ gloves to protect yourself.

NiMH batteries are alkaline batteries and are recyclable. In fact, my Toyota dealer wanted £1,000 core deposit in addition to the £830+VAT cost of the battery to make sure the battery doesn’t end up in landfill or dismantled to repair other batteries.

It is vitally important that the correct safety equipment and procedures are used when working on the Prius battery. There are many videos debunking hybrid myths and explaining the de-energisation procedure on YouTube.

It is often said about scan tools “they don’t tell you what to do, but point you in the right direction”. Well look at FIGURE 6 from the G-Scan2! There are several things that can cause a block to become weak. 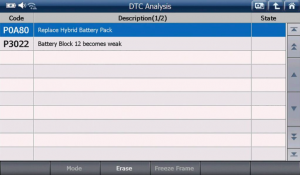 A quick look at the battery block data on the scan tool (see FIGURE 7) confirms the diagnosis. The snapshot shows battery block 11 has excessively low and high minimum and maximum voltages, indicating a faulty block. 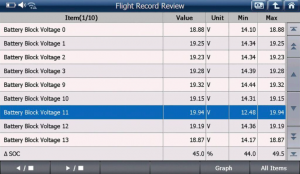 Note the battery blocks are numbered 0 to 13 in the data field. Block 11 is the 12th block in sequence and that is what the DTC is referring to. Also note, for display purposes I have omitted blocks 4 to 8.

Looking at the data, I could see that blocks 1 and 13 also showed a voltage difference of more than 0.3 Volts. The battery was removed for replacement following the manufacturer’s procedures. Once on the bench, the covers were removed and the individual modules were tested using a volt meter. It was found that three of the modules had voltages out of tolerance.

A second-hand replacement battery was sourced and installed. There is no need to code or initialise the replacement and on commissioning, the car performed as it should, see FIGURE 8. 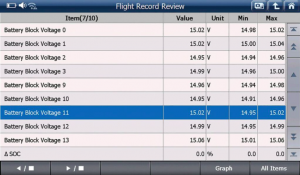 Jim Gilmour is one of the technical trainers involved in ‘Our Virtual Academy’, designed to provide manufacturer-level technical training to the independent aftermarket. The service delivers training material via interactive video content. Visit www.ourvirtualacademy.com for more information and to take advantage of a free trial. Jim will present at Autotechnician’s Big Day Out technical and networking event on Saturday 2nd September in Nottingham.