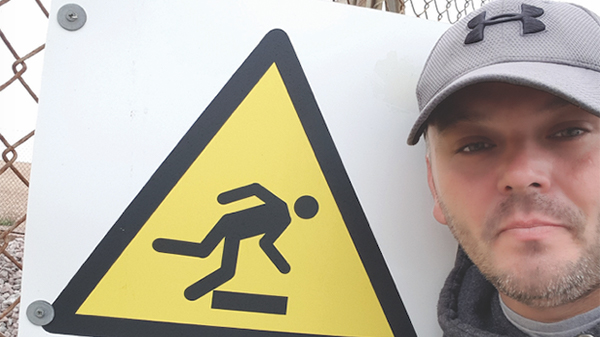 We hear from Darren, an apprentice in Brighton, who shares his experience of depression and how automotive charity Ben helped to turn his life around.

“I was working as a bus driver, which was stressful, and over time I became more and more down, ending up suffering from depression. I decided to start a new career, so I moved with the family down to Cornwall where I worked in a couple of sheet metal factories. At first it was OK, but before long, the 10-hour shifts, heavy lifting and the expectation to do overtime left me constantly tired. I started feeling down again every day, got no enjoyment out of anything and my depression returned.

“I thought I was dealing with my struggles, but my family saw a change in me. I was lashing out, becoming aggressive, I was moody a lot of the time and eventually my wife couldn’t take any more. She left with the kids and moved to Brighton. It was awful and broke me.

“I wanted to be with my family so much that I moved to Brighton, so I could spend time with the children. But I had no job, no money and nowhere to live. I ended up homeless, living in a shelter whilst still trying to deal with my depression. It was a daily struggle. I started to see my GP, asked for help with my mental health issues and was given medication. I was also put in touch with a couple of local charities who could help me get out of the downward spiral I was in. I was 38 years-old and starting a new life again, so I decided to start a new career. I took on an apprenticeship with a well-known auto repair company, an opportunity which came through one of the charities I was in contact with.

“It was because of my apprenticeship that I found out about Ben and the help they could provide. At the time, I was close to moving into a new flat, but I didn’t have the money to pay for the initial costs. I explained this to my case worker and Ben helped with payments to get me out of the shelter and into my own place. It was just what I needed and gave me such a lift. After that, my case worker kept in touch, speaking to me once a week and giving me advice with any challenges or issues I was having. With the new career, new flat, medication for my depression and the support I was receiving, life was so much better than a year before.

“I’ve grabbed this chance with both hands. On top of all the help I have had from Ben and the other charities, I now make sure I take time out to relax and enjoy things more. I also address situations quickly rather than letting them build up and stay in my head, which is a trigger for my depression.

“The best part of the process was that I got to keep seeing my kids, and now I see them near enough every day. They are my world. I’m determined not to go down that rabbit hole again.”