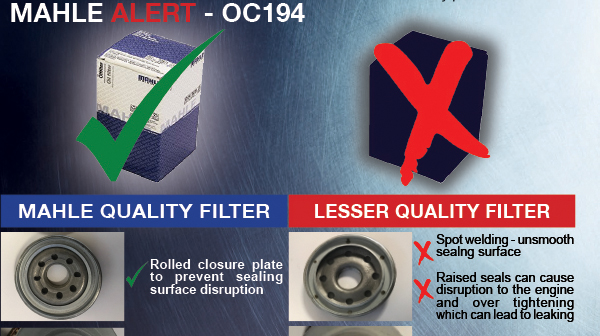 Replica versions of MAHLE’s OE filters OX171/2D and OC194 have come to the company‘s attention after it found customers being sold filters that can barely function after installation. The replica filters lack an important detail: A black plastic mandrel with an O-ring seal is mounted at the end plate of the filter element – known throughout the industry as the MAHLE pin. In the assembled state, the pin fits precisely into the bore in the filter housing and seals it off.

To get around the patents, a large plastic blade has been attached to the end plate in an attempt to copy its filter insert. This blade can get caught when screwing the cover into the housing. In this case, the filter insert can no longer rotate.

Another problem is that the sharp plastic blade can come dangerously close to the by-pass valve in the housing, damaging it and putting it out of action. This means the by-pass valve, which should only be opened for short periods in certain situations, is permanently open, letting unfiltered oil circulate continuously through the engine and creating serious engine damage.

To combat these replicas, MAHLE has introduced a range of support material highlighting the specific differences, see below… 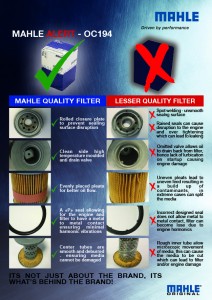