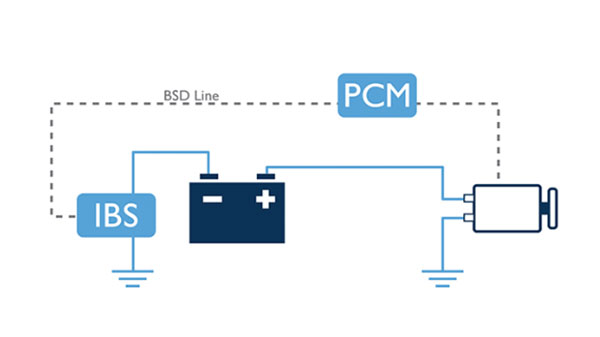 I don’t know about you, but there are times when I cringe at the amount of technology loaded into one vehicle and the potential for things to fail. The good news is, the more they load in the more opportunities pour out when they go wrong. Here is one such vehicle that has been suffering from repeated breakdowns as a result of what proved to be overvoltage.

To break with case study tradition I can reveal the cause of our customer’s complaint proved to be an intermittent alternator failure which I am sure, comes as no surprise and so you may choose to read no further. However, the real reason for this case study is to highlight the pitfalls we face (both aftermarket and franchise dealer) when presented with technology laden vehicles with intermittent errors.

It would have been very tempting to install an alternator and hope for the best, but using PicoScope and technical information to establish the description and operation of the vehicle power supply system, we were able to prove to our customer an alternator was indeed required.

Remember, if we don’t know how a system functions, we cannot diagnose the system!

With our study vehicle none of these symptoms were present! Here is more about our customer’s symptom: The vehicle could be driven with no issues, then without warning, the instrument panel would light up like a Christmas tree with warnings ranging from “Brake Stability Assistance” to “Active Steering Malfunction” followed by mechanical symptoms such as auto transmission held in a particular gear and no response to gas pedal input.

One event saw our customer start the vehicle after a long stay at an airport car park, drive approximately 6 miles where upon joining slow moving traffic, all the above symptoms revealed themselves leaving the customer limping to the hard shoulder. Here the customer immediately cycled the ignition off and on repeated times whilst attempting to crank the engine (no response from engine/starter motor, instrumentation remained illuminated)

After waiting 5 minutes with the ignition off, the vehicle was restarted as normal and the customer drove with no repeat symptoms… for over 2 weeks!

As always, the customer interview is vital as the information above will prove to be essential during our diagnosis. A basic inspection confirmed no issues around visible connections, no arcing of major components and the wiring harness routing to be correct. The scan tool was attached (a piece of the diagnostic jigsaw) and confirmed 4 control modules to be reporting overvoltage, 2 control modules reporting voltage related issues and the PCM reporting an intermittent alternator communication error. 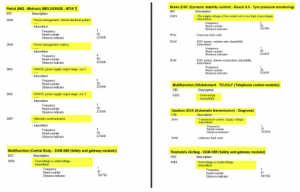 Once again the scan tool provides invaluable information as to why warning lights and messages have been displayed and more importantly how they relate to one another with a historical sequence of events logged via the “distance indicator”.

Here we can conclude overvoltage conditions have been repeatedly detected over a period of time and the majority have occurred during the last 20 counts of the distance indicator, culminating in an alternator communication error code.

To commence the diagnosis of any power related system failure, we must start with battery evaluation and here is where PicoDiagnostics sits perfect, not only with the included battery test but the combined starter motor and alternator test. (One rapid non-intrusive test to evaluate 3 major components): 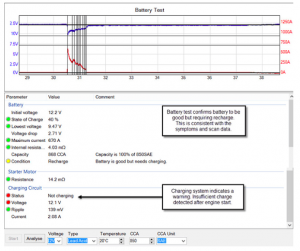 Here the test results were as expected with an initially low battery voltage (12.2 V) and a recommendation to recharge the battery given the communication error with the alternator. The test results have also highlighted a potential charging issue as battery charging would appear to be active but inefficient.

At this point we need to understand how the charging system operates on this vehicle and accurate technical information is key to both system familiarisation and diagnosis (a piece of the diagnostic jigsaw).

Had we been dealing with a conventional charging system where the alternator is “excited” via the charging indicator warning light (with internal voltage regulator), then we would have enough evidence to warrant a replacement alternator. However this is the modern world with a technologically advanced vehicle utilising a “Power Management System” and here we must proceed with caution.

Our alternator now forms part of a network and is controlled through a single communication wire (BSD line-Bit Serial Data) via the Power management software contained within the PCM. Depending on inputs from the battery temperature sensor and IBS (Intelligent battery sensor), accompanied with engine and electrical load signals, infinite control of the charging system is achieved utilizing the alternator output only when relevant and applicable with respect to battery life, fuel consumption, and emissions levels. 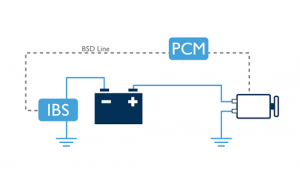 Now we have a multitude of other components to consider when investigating occurrences such as overvoltage. Could the PCM be faulty, what about the IBS, or could this be a network error? It is only right we present ourselves with these questions now rather than installing a component and asking the same questions later when the fault returns.

This is where training and experience come into play (a piece of the diagnostic jigsaw) as we need to take stock of what we know and of course what we don’t. Here, we can then form an action plan on how best to proceed with respect to costs and ease of access:

Based upon the review above a physical check of the charging system was paramount (item 5 above). This would enable evaluation of the charging and control system and could possibly indicate areas of concern.

Using PicoScope (the final piece of the diagnostic jigsaw) our waveform below looks at various aspects of the charging system in an attempt to locate the cause of our overvoltage error. These include the BSD alternator control communication line, output voltage, output current and rectifier/phase winding evaluation. 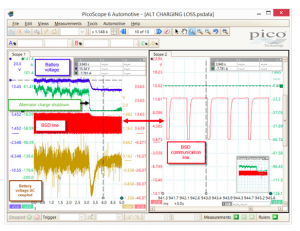 Here we can see a rapid drop in the output current from a peak of 60 amps to −7 amps which is most certainly uncharacteristic control of a charging circuit given the result upon battery voltage. Whilst infinite charging control is desirable, the effect upon battery voltage should be progressive to prevent undesirable side effects such as lighting flicker etc. Looking at the waveform, the battery voltage does appear to be reaching a level of concern at 15.34 V.

Had we therefore captured the overvoltage event and the operation of the PCM shutting down the charging system (a question that has to be answered)?

Zooming on channels A and D of the waveform (Battery voltage, AC and DC coupled) we can evaluate the phase windings of the alternator accompanied with the diode/rectifier pack function. Whilst the periodic spikes seen are to a degree characteristic, the typical AC ripple expected from the alternator output was non-uniform and also present in the battery voltage DC coupled. This most certainly points towards an internal alternator component failure or wear within the assembly responsible for charge output, but still does not rule out the control system as a cause of overvoltage. 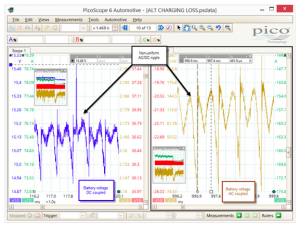 Knowing the BSD line is directly responsible for alternator output (subject to command from the PCM) the BSD waveform was decoded using the PicoScope decoding feature in an attempt to identify errors within the coded message carried to and from the alternator during the abrupt shutdown (captured above). Using the LIN protocol to decode the BSD line it can be seen that communication continued between the alternator and PCM as Picoscope can decode “packets” of data after the shutdown stage.

Unfortunately we have no way of converting the decoded data to anything of use other than confirming communication to be present. The BSD line carries information specific to the BMW brand and utilises BUS voltage levels identical to a LIN BUS, but the decoded values will be entirely different. 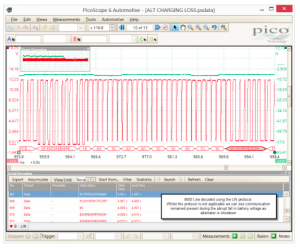 With all the testing to this point we have found evidence to warrant an internal investigation of the alternator but we cannot categorically rule out the PCM or IBS from the equation (items 6 and 7 of our action plan).

One suggestion was to contact the local BMW dealership to ask if they have the facility within their diagnostic equipment to either decode the BSD line or to drive the alternator using an ‘active test’ function (scan tool to command high and low charge output by simulating BSD line command message). To my surprise they do not have such a function within the dealer scan tool, so placing us all in the same boat at this stage of the diagnosis!

There are tools on the market that can simulate such charge control commands as BSD, LIN and PWM signals etc. when it comes to alternator evaluation but these are expensive and generally purchased by reconditioning agents given the value of such a tool in a refurbishing application.

After hours of study I came across a little gem of information that proved incredibly simple yet invaluable to confirming our alternator was in fact the root cause of our overvoltage. What would happen if the BSD line failed between the PCM and the Alternator? Would the battery discharge and vehicle break down? The answer… no!

Should the BSD line become open circuit between the PCM and alternator, the alternator assumes “machine sensed” control and will monitor the charge output internally as with a traditional machine sensed device.

Armed with this information, the BSD line was removed from the alternator and the battery voltage monitored via the OBD socket using the PicoScope. Here we could log battery voltage fluctuations over extended time periods. 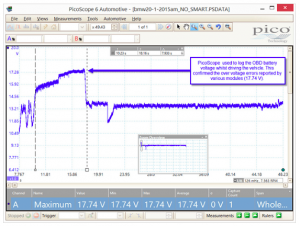 At last, undeniable evidence the overvoltage was a result of alternator internal regulation failure and not as a result of BSD control (over 17 V captured with no input from the BSD line). Time now to remove and inspect the alternator with confidence given its challenging location! 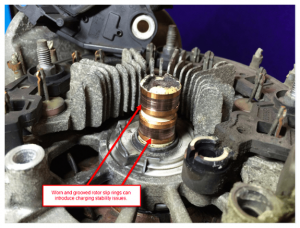 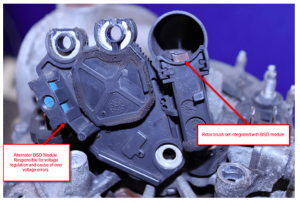 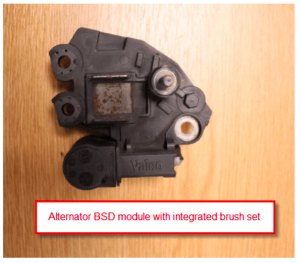 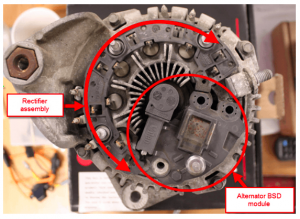 Close inspection of the alternator confirmed no signs of overheating or scorching, but the rotor slip rings revealed a deep wear pattern with “grooving”. This condition could introduce charging stability issues and contribute to the non-uniform pattern we can see in the alternator output voltage AC coupled.

I have no doubt the root cause of the overvoltage condition could have been resolved with a replacement BSD module alone, but given the labour involved to remove and replace the alternator, accompanied with the wear pattern present on the slip rings, a replacement alternator was the most cost effective repair with a view to future reliability. 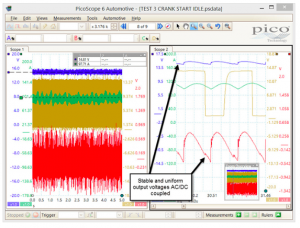 The above waveforms confirm a successful repair with a stable and uniform output voltage both AC and DC coupled (battery voltage stable at 14.81 V).

This case study has opened my eyes to the vulnerability of control modules with respect to input voltage. The effect on vehicle control systems is dramatic should the input voltage become not only too low, but too high. The alternator is a component we take for granted and generally don’t worry about with respect to diagnosis. However, as technology marches on, charging system control will become more complex and no doubt more efficient when integrated into vehicle networks.