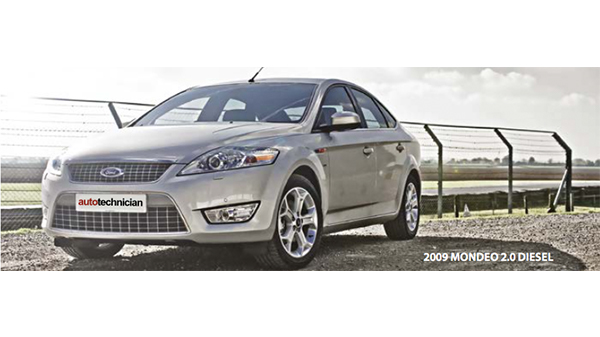 John highlights the benefits of a routine global scan to unearth vital clues that could save you hours of work in the long run.

I am often asked by other technicians, “Why do a global scan? Are you looking for more work?” The answer is simple. The more evidence you gather; the quicker, easier and more accurate the result. Two such cases, both Fords, were presented to me in quick succession.
FOCUS WITH FAULTY SPEEDO 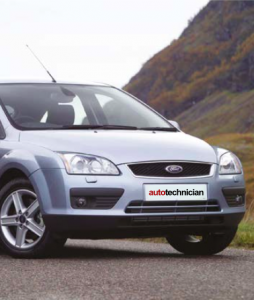 The first was a 2006 Ford Focus, 1.8 petrol. Its speedo wasn’t working and it had a cluster lit up like a Christmas tree! The customer asked me to replace the cluster as he had it tested twice by ACtronics and they could not fault it. I explained my reluctance to just replace the cluster and agreed an initial diagnostic time.
I’ve been on many courses over the years with various providers, Frank Massey springs to mind. He always stresses the importance of having control of the repair. In this case, it was paramount.

We carried out a global scan with the Ford IDS. Many aftermarket tools are capable of this function, but the IDS is my preference. Many fault codes were stored for communication

issues. More importantly, there was a lack of fault codes – and in fact, a lack of communication – from the ABS. Access to the ABS module is limited, so it was prudent to check the under-
bonnet fuse box for power supplies. No power was found on the supply side of the ABS power fuse. This was when I smelt a rat, literally! Well a mouse, I think. The evidence was there; both
the smell and remains of food. 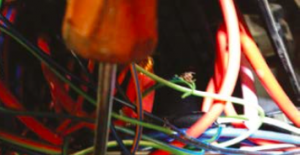 Reporting back to the customer, we had the “Mice? I’ve seen no mice!” conversation. We agreed further diagnostic time to check for the lack of power at the fuse board. Checking for power supplies at the General Electric Module/body controller, all was found to be OK, so we were faced with a possible broken wire situation. 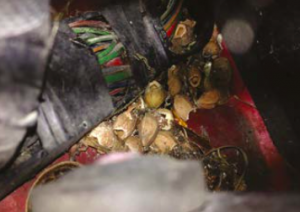 Removing the under-bonnet fuse box from its holder, there it was; evidence of mice activity and chewed-through wires. The wiring was repaired, the faults cleared and then we had a working speedo. Total parts spend, less than £1.00. The cluster that had been tested twice was indeed not faulty. When we informed the customer of his furry intruders, he then told me about the little squatters in his garage!
MONDEO IN LIMP MODE
The second problem car was another Ford, this time a 2009 Mondeo 2.0 diesel. This had a problem of going into limp mode and logging fault codes for air temperature variation. We
were called to look at a non-start Jaguar and the Mondeo and had decided to do them on site. The Jaguar was a simple EGR fault but on arrival, the Mondeo was in a state of strip down,
so it was decided it would be brought in once it was up and running. However, my wife had commented on the oily mist residue on the engine cover. This was dismissed by the garage
and the vehicle was brought to us.
I do not usually allow customers to wait but on this occasion, I did, as I’ve known the technician a long time.
We started with the global scan. Again, I was asked, “Why bother?” All was revealed. The engine fault codes were there, but more importantly, there was crash data stored in the RCM air bag module. I explained we were now looking for possible wiring and/or component damage. We carried out a smoke test, but it didn’t highlight any leaks.
I then referred him back to the oily stain my wife spotted a week or so earlier. Using silicon sealant, we road tested the vehicle and found a cracked inlet manifold, possibly broken in
a prior accident. The manifold was replaced and all was well. The moral of the story? Look at what the car is telling you and do not become blinded by a quick-fix mentality.
“Getting control of the repair is paramount.”
Tags: Diagnostics, Ford Focus, Ford Mondeo, Global Scan, John Tinham, Motor Engineer
SHARE THIS