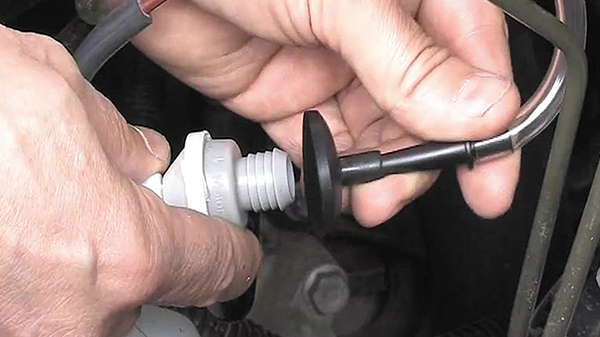 If a customer draws attention to a sudden change in the feel of the brake pedal in their car there can be many possible causes, such as air in the system, fluid leakage, or a binding brake caliper to name just a few. Another possibility – especially if the complaint is one of excessive effort needed to stop the car – is that the vacuum brake servo, also referred to as a brake booster, is defective in some way. To diagnose whether the servo system is working correctly, ZF Aftermarket engineers recommend using a handheld vacuum tester and a structured series of tests as follows.

With the engine switched off, press the footbrake repeatedly until the pedal feels firm – this releases any residual vacuum in the system. Still pressing firmly on the brake pedal, start the engine. If the pedal gradually sinks toward the floor of the vehicle with the engine running, vacuum is being generated. This suggests that the fault probably lies elsewhere in the braking system rather than with the servo, although further checks should still be carried out to confirm that the system holds vacuum for an adequate period of time. If the pedal doesn’t move at all, insufficient vacuum is being generated and there is definitely a fault in the servo system.

Check the entire vacuum system including all connected components such as the exhaust gas recirculation (EGR) valve, engine vacuum pump and fuel pressure regulator. Examine hoses and connectors for splits, cracking or perishing and replace any items that are defective or no longer fit snugly.

The non-return valve is installed in the hose between the brake servo and the intake manifold or the vacuum pump of the vehicle’s engine. When the engine is switched off, the valve closes to maintain vacuum in the brake servo, storing brake-assisting energy until the engine is restarted. The non-return valve also prevents fuel and oil fumes from entering the brake servo and damaging its internal rubber diaphragm. When the engine is running and the brake pedal is operated, a pressure differential occurs between the inlet and outlet ports of the valve, causing it to open against spring pressure and allow vacuum to be applied to the servo (Figure 1). When equilibrium is reached and the vacuum is equal at each port of the valve, the spring closes the valve (Figure 2). In this way, vacuum in the brake servo is maintained at a constant level. 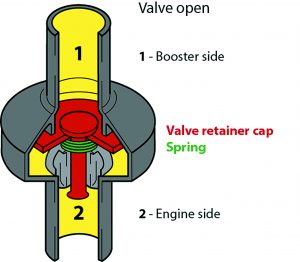 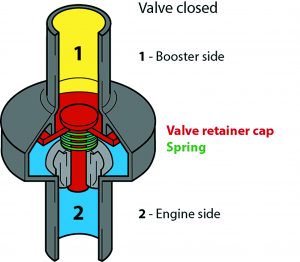 Failure of the non-return valve has several possible consequences:

Any of these defects will reduce or eliminate braking assistance for the driver, potentially increasing stopping distances and heightening the risk of an accident.

Connect the handheld vacuum tester to the engine side of the non-return valve, either by disconnecting any small vacuum pipe present or by teeing into the main vacuum pipe from the engine or the vehicle’s vacuum pump (Figure 3). Start the engine and leave it running until a steady vacuum registers on the gauge. Switch off the engine and check that the vacuum is maintained for a period of five minutes (Figure 4).

Fig. 3:  Testing engine side of the non-return valve 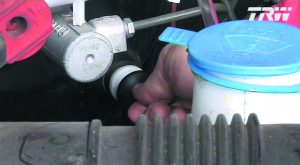 Fig. 4:  Vacuum must be maintained for five minutes 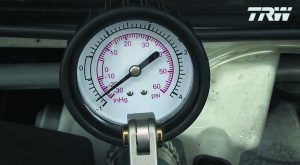 Prise out the non-return valve from the servo unit and connect the vacuum tester to the servo side of the valve (Figure 5). As before, start the engine and leave it running until a steady vacuum registers on the gauge. Switch off the engine and check that the vacuum is maintained for five minutes.

Fig. 5:  Testing servo side of the non-return valve 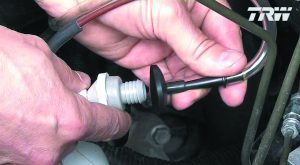 With the non-return valve removed from the servo unit, connect the vacuum tester to the servo (Figure 6) and operate the tester’s hand pump to generate a reasonable level of vacuum. Once again, this vacuum must be maintained for five minutes. 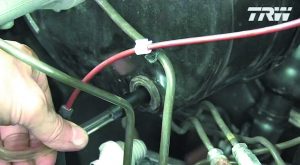 If this test fails, check the servo unit for contamination or damage such as corrosion at the seam(s) between the parts of the housing or a perished grommet where the non-return valve is fitted to the servo. Be aware that any damage may be internal due to the ingress of oil/fuel fumes and therefore not externally visible. Depending on the nature of any problems found, it may be necessary to replace the grommet or the complete servo unit. Where new parts are required, ZF recommends the use of Original Equipment components such as those provided within its extensive portfolio comprising the renowned Lemförder, Sachs, TRW and Boge brands.