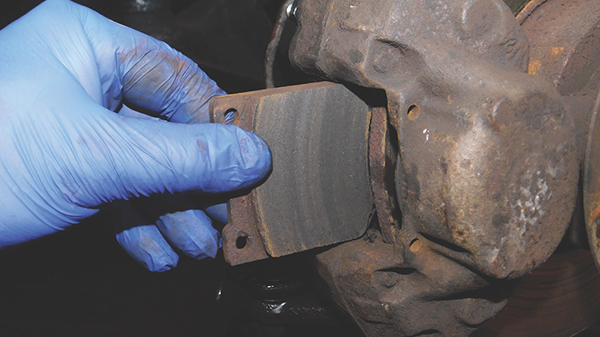 Brakes – past, present and future

Being ‘remove and replace’ products, disc and pad heritage tends to be underreported, which is a shame, argues Rob Marshall, who looks into why they evolved and the factors influencing future development.

Any kind of brake converts kinetic energy into another form, because energy cannot simply vanish. Regardless of whether installed to a locomotive, motorcycle, an automobile, or a soap-box racer, a friction brake converts motion to heat, prior to shedding it into the air. This relatively simple task is more complicated the faster and heavier the vehicle becomes. Cooling is a significant issue that seems not very relevant on a typical push-bike but becomes more of a challenge on a hefty and fast-moving powered vehicle. The linings should also be robust and must not disintegrate, when exposed to temperature extremes. Manufacturer design and cost considerations aside, renewable brake friction components must also possess long service lives and, more recently, their composition is being placed under greater scrutiny for environmental reasons. The increased ability of high voltage hybrids (and Battery Electric Vehicles – BEVs) to drive on electric power alone is also a driving force behind more recent developments.

As early motorcars were, literally, horseless carriages, we should be unsurprised that the rudimentary braking systems were carried over. In some cases, the friction block that rubbed against the wheel rim was made from wood and so it is unsurprising that the situation did not last for long. As most of these pioneers had enough trouble keeping their unwieldy contraptions moving, brakes were very much a secondary consideration, until speeds had risen sufficiently high for decent retardation to be necessary.

With the benefit of hindsight, it seems crazy that early developers tried to keep the friction brake away from the wheels but they had the difficulty of finding an effective way to activate them either side of moving suspension, long before brake hydraulics were invented and solid push-rods were the conventions. The transmission service brake involved fitting a large drum brake to the propeller shaft, thus saddling the running gear with handling the stopping forces. Eventually, when the brakes were relocated close to the wheels, they tended to be fitted to the rear only until the 1930s, which hardly benefitted the car’s stability if the wheels locked, especially when negotiating a corner. Thankfully, as engines became more powerful, brake development matured, as cables replaced the push-rods, prior to hydraulics taking over.

As mentioned earlier, physics demands that a brake’s basic effectiveness is defined by its ability to absorb and shed its heat into the atmosphere. Cooling, therefore, could be enhanced if the friction parts are more exposed to the airstream. While early racing cars possessed drum brakes, their diameters could be almost as large as those of the wheel rim (affecting handling adversely), plus they were also finned, when increased their surface area. Even so, as virtually none of the disc brake is enclosed, it posed a more logical and practical solution. Wartime accelerated developments even faster than motorsport and the first successful vehicular application of disc brakes permitted WWII bombers to reach a post-landing…

…standstill within a moderate distance. With peacetime restored, the disc brake was put to good use for motorcars and has since become universal but refining it was not easy. While the North-American Crosley-Hotshot was fitted with disc brakes for a limited period during the early 1950s, corrosion and clogging resulted in the manufacturer reverting to more established drum brakes.

Naturally, with the mantra ‘Race on Sunday, Sell on Monday’ ringing in several ambitious manufacturers’ ears, motorsport also adopted disc brakes but, even then, it was not a straightforward exercise. Jaguar is famed for employing Dunlop disc brakes in a trio of C-Type racing cars for the 1953 Le Mans 24 hour race, which finished first, second and fourth respectively. Stirling Moss is alleged to have stated that disc brakes did not work perfectly the moment they were installed and it took the team considerable developmental work to make them achieve their objectives.

Despite the behind-the-scenes technical challenges, the winning Jaguar averaged over 100 mph for the first time in the history of the Le Mans race, an achievement that would have been unlikely, had it not been for intense development of its disc brakes. Buoyed by success, the following D-Type racers inherited the set-up and realised a hat-trick of wins at Le Mans during 1955, 1956 and 1957. Logically, by association with motorsport, disc brakes became popular with expensive and sporting production cars. As an example, Dunlop disc brakes found their way onto Jaguar’s Mark Two saloon, prior to being rolled-out across the range.

Unsurprisingly for a company with such an innovative heritage, Citroën’s DS of 1955 possessed front disc brakes, an arrangement that continued until the death of the GSA model in 1986. These were hardly favoured by technicians, because the front discs were mounted inboard, complicating the disc replacement procedure. Renewing the pads was also far from easy, with the calliper being bolted to the gearbox, mounted just behind the engine. The Jensen 541 Deluxe (front and rear) and Triumph’s TR3 (front only) introduced disc brakes during 1956 and, after that, discs became more popular, as they were fitted to more affordable and humdrum models. Today, even the most modest-powered small car has discs mounted to
its front hubs, where most of the braking effort is focussed. This fact also explains why many carmakers fit drum brakes to the rear, especially as drum brakes remain the most effective method of incorporating a handbrake mechanism. Yet, by…

…their very design, disc brakes are not perfect. When used as a handbrake, the disc contracts as it cools, reducing the pressure between the pad and disc. Unlike drums, disc brakes also possess no self-servo effect, which is one reason why disc brakes dictate either higher pedal pressures, or a method of power assistance. For most cars, the vacuum servo provided the solution, powered by either inlet manifold depression, or a separate pump.

Ventilated discs also have motorsport origins, before finding a commercial use. The passages within the disc more than double the surface area from which heat energy can be dissipated. They work by cold air being sucked into the disc’s structure as it turns, prior to hot air being exhaled. Other means of increasing the disc surface area and exposure to cooling air include drilling holes into the discs and incorporating grooves.

A major challenge with any friction brake material is that the friction characteristics are linked to temperature and so a technical balance must be achieved. While AT shall investigate modern friction materials in greater depth in another issue, early developers experimented with different linings but the breakthrough hailed from within a domestic shed in Derbyshire. While Herbert Frood cut his teeth on manufacturing woven cloth friction materials for horse-drawn carts, he developed a more hardwearing friction material for motorcars that incorporated asbestos and established the Ferodo company (a part anagram of his name) to mass produce it. This led to the company’s first OEM contract, providing linings for the 1922 Austin 7 and, notably, disc pads for the Triumph TR3 several years later.

As the high-temperature stability and low cost of asbestos made it a core ingredient for most friction linings, the brake friction industry had a giant set-back, when asbestos’s serious health risks to technicians especially led to a ban. Significant investments were made to replace the material with alternative fibres and inorganic materials but this led to a larger variance in lining quality between friction manufacturers. After introducing asbestos initially, it is interesting to note that Ferodo was first to market with non-asbestos brake materials and started to supply the new formulation to the OEM market from 1980. Generally, friction linings have tended to become harder since non-asbestos alternatives appeared, which increases wear on the disc.

With vehicle emissions being placed increasingly under the spotlight, legislators have also been looking beyond tailpipe emissions, including those shed from tyres and brakes. In early 2020, Emissions Analytics reported that particulate emissions from both brakes and tyres can be 1,000 worse than those emitted from the exhaust. Not only are certain brake friction ingredients carcinogenic but also friction linings are responsible for a third of the world’s copper pollution. Copper, incidentally, serves as a heat stabiliser. The element is also particularly toxic to fish, an important consideration when most lining dust is washed from the roads into drains and end- up, ultimately, in waterways.

This explains why many quality friction manufacturers have marketed copper-free friction lining formulations for some time. Currently, ELV and Reach regulations govern friction lining ingredients in Europe, as does the Brakes Law (which calls mainly for the removal of copper and other heavy metals in brake friction materials by 2025) and the NSF registration in North America. Again, many quality lining manufacturers (such as TRW and Ferodo) have replaced heavy metal components with alternatives based on mineral and ceramic fibres for some time but developments have not stopped there. Apart from alternative lining materials (such as those based on cement), brake dust capture systems are also being trialled.

The arrival of high voltage hybrids (starting with Honda and Toyota) introduced not only regenerative braking (not covered in this feature) but also changed the interaction between the brake pedal and hydraulic system. To provide an ideal balance between regenerative and friction braking, brake pedal feel can be provided artificially by either an electric motor, or a pump-driven hydraulic system. Again, we shall investigate these systems in greater depth in the future. Additionally, with no mechanical noise to mask the sound of the brake friction surfaces working against one another, manufacturers have focussed on lining acoustics, as well as developing the friction characteristics to work best at lower temperatures, especially to provide optimum stopping power in emergency stop manoeuvres. Again, we will look at modern lining formulations more closely in a future issue.