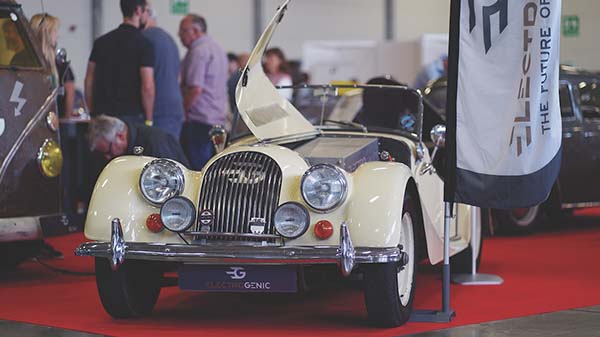 The sight of the adults lusting over a car from their 20s, the youth queuing for a go on a simulator, the sting of £8 for lunch… Oh, it’s good to be back.

Brusque opening remarks aside, seeing several thousand people in one venue for the first time since early 2020 was almost emotional. We’ve come a long way over the past 18 months, and the British Motor Show marked the first major automotive event since recent restrictions were lifted.

Our spirits have also been lifted, and now it was time to look to the future and consider the constant evolution of the automotive trade.

Held at the Farnborough International Exhibition and Conference Centre, right next to the private, jet-laden Farnborough Airport runway, there was a profusion of new cars, classic cars, electric cars, automotive personalities and even a Fiat Idea understeering its way around an AutoSOLO event. I visited on a Thursday as this was also the National Automotive Industry Day. Here, the worlds of car enthusiasm and business met head on – with the serious discussions about the digitized and electrified future juxtaposed by a collection of classic Citroens. I sat in a Hyundai IONIQ 5, drove a Ford Mustang Mach-E, and then enjoyed a display of Caterhams bouncing off their rev limiters while eliciting wild responses from passengers who were being flung around in a plume of smoke.

Old didn’t just meet new at the car displays either, as there was a clash of opinions during the industry talks. Down the far end of the event was a dedicated building entitled the Select Electric Motor Show. Inside was almost every electric car that’s currently on sale, but before you took a seat inside a Porsche Taycan, a Sinclair C5 greeted you upon entry. A reminder as to just how far we have come since 1985’s plastic-fantastic pedal car with a 12-volt lead-acid battery.

It was this part of the show where I found many enthusiastic people. The sort of energetic inventory types who spend weekends tinkering away in a garage or solving complex puzzles. The next Alan Turing or even Sir Clive Sinclairs of the world, perhaps.

Alex of Electrogenic was on hand to explain how they are converting classic cars into modern weekend toys powered by batteries. There’s nothing particularly new here now several classic car experts have turned their hands to EV conversions, but two things stood out alongside the increasingly typical Beetle engine swap. One, they’d converted a Morgan, and two, their example Porsche 356 C used brand-new batteries and motor.

Many conversions currently use salvaged Tesla components, the good bits of which are fashioned into complete battery packs. The Kidlington-based Retro-EV (R-EV) creator offers that too.

One reason for the use of used components is Tesla’s notoriety for simply not supplying the aftermarket. The company likes to quote for entire battery pack replacements or new vehicles as opposed to replacing or repairing parts – check out Rich Rebuilds on YouTube – there simply isn’t a battery or motor supply chain for the aftermarket.

But, by establishing its own supply route to brand-new batteries and motors, Electrogenic is pioneering within this burgeoning scene. Sure, it costs more than the repurposed Tesla option, and is different in its design to the Silicon Valley affair, but it also means they can provide the customer with a warranty and when a full EV swap and restoration costs north of £30,000, that piece of mind is invaluable.

The most pleasing surprise of the entire event was the AC Series 1 Electric. Established in 1901, AC Cars is still producing box-fresh inimitable two-seaters, but now instead of a thundering eight-cylinder, you can order one with battery propulsion. The company uses brand new batteries, motors and ancillaries to transform the driving experience. A Type 2 charging port is at the rear, the connector under a polished metal fuel filler cap – as it should be. Power still goes to the rear wheels, and I imagine that the 0-60mph time of four seconds feels a lot brisker with the roof off and low seating position.

“We still make a version with a 2.3-litre engine and the Superblower Mark IV with a 378 cubic inch V8 at 650bhp,” explained Jon Peeke-Vout, Operations Manager at AC.

“But we have to move forward too. Everything is new. We work with a company called Falcon Electric and the battery packs and software are bespoke to this car. It’s all made in the UK.”

If the longest running continuous British car company is moving with the times, I take that as a sign that now is the time to adapt. Chapeau to them. Both the EV conversion and brand-new production of EVs takes a very particular set of skills, skills that – no, this isn’t a Liam Neeson film – requires specialist training.

I’m sure that you were well aware, as an astute reader of Autotechnician, that the IMI research in December 2020 revealed that just five per cent of technicians in the UK are currently qualified to work on EVs. IMI CEO Steve Nash took part in a panel debate to discuss the hurdles ahead on ‘The Road to 2030’.

The urgent need for training was a point hammered home by Dave Reece, an automotive industry veteran and founder of School of Thought, an organisation that helps young people become work-ready. “Cars are becoming electric, they are autonomous, and they are super exciting to work on,” he explained.

“In these changing times, we need more highly skilled young people to come into our apprenticeship programmes. They are as educational as doing a degree, so it’s a very, very, high level. You actually start work and end up with some money, so you don’t accumulate debt, and you can end up with a job for life.”

The change in the industry was further backed up by Matt Cleevely from Cleevely Electric Vehicles, who has often frequented these haloed pages on several occasions and also had a presence at the event. “We get EVs the main dealers can’t fix, because they don’t have the trained technicians required to complete the work,” he highlighted.

“On some of these early Nissan Leafs and Renault Zoes, for example, charging components are now seven-eight years old. Compared to a direct ICE equivalent, there can be increased tyre and suspension wear because the batteries make them heavier.

“Brake corrosion and seizing is a big thing. Brakes don’t wear as much because of the one-pedal driving regenerative braking provides, but they can seize and that’s a safety concern.

“As an independent, I wanted to know what the future of my job is going to be, so now we are able to offer a dedicated EV servicing and repair service.”

And if this all sounds like too much EV talk, I apologise. But that was the resounding theme for me. There may have been one of the pre-production Lamborghini Huracán STOs on display, Mike Brewer working his socks off on the Live Arena and North Kent’s finest Lotus selection – but all I kept hearing was ‘2030’.

What will happen to classic cars in 2030? How can you train for 2030? Will you make the jump before 2030? It was ringing in my ears all day. Or was that simply because I was standing too close to the screeching Pirellis of the Paul Swift stunt driving team? Hard to tell.

Either way, I’m happy that there are now events again where on the one hand we can studiously discuss the future with intense debates – one particular discussion on the NAID stage got particularly terse at one point, weighing up the National Grid’s ability to charge EVs. Answer: You shouldn’t worry about the Grid, it’s the availability of chargers that is the key issue – and on the other, simply enjoy a subject that links our sometimes fragmented nation together; our love of cars.

I’ll take a R-EV Citroen DS for the weekend and a Toyota GR Yaris for the commute, please. Or maybe the other way around. Either way, these proposed governmental deadlines. They aren’t to be decried, but to be embraced, as if the diversity of vehicles, interests, and topics on display at the British Motor Show is anything to go by, these next 14 years are going to be the most fascinating this industry has ever been through.