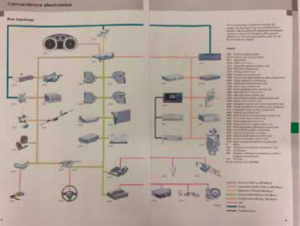 Consulting the manufacturer’s information site to obtain the relevant wiring diagrams and system topology (network diagram) is a must with this kind of job, to ensure that you fully understand how the system functions, what components are in the system and the relationship between them, see Figure 1 – Network Topology.
The central locking system operates on the convenience CAN network (at speeds of 100mbps) and consists of the following control units: a main comforts system control module, individual door control modules (four in this case), parking aid, auxiliary air heater, trailer detection, HVAC display panel. It is interconnected to the on-board power supply control module.
Wiring checks were carried out at the faulty door lock to check for basic power supply, ground and signals to rule out a wiring fault. A common problem on these is for the wiring loom to break in the conduit in the door shut. The same wires were then load tested to double check for integrity.
At this point, a replacement door lock was ordered and fitted, this restored the locking operation of that door but the key fob still didn’t work. Possible causes could include a bad battery, faulty remote or simply a remote that requires re-programming to match the vehicle. The above basic checks were carried out and an attempt to re-program the key fob made, but this was unsuccessful.
A TROUBLED NETWORK 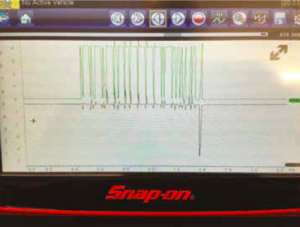 Checking the comforts system network via the scope revealed an interesting waveform and highlighted that the network was in trouble, see Figure 2 – Comforts Network clearly in trouble.
Further investigation of the network diagrams highlighted the relevant control units on that network. Using the communication data blocks on VCDS it is possible to check the network status of each module, represented by values of ‘1’ meaning correct communication or ‘0’ meaning no communication to or from that module. Handy, as usually the easiest way of detecting a faulty module within a network is to gather a list of modules within that network (via the topology diagram or installation list viewed diagnostically from the CAN module) and then to disconnect each module in turn, until the network comes back online.
Studying this data revealed a lack of communication with the HVAC unit – now you may be thinking what does the HVAC control panel have to do with the central locking? Nothing, initially, but the HVAC control panel is also connected to the comforts CAN network and this lack of communication could be causing the limited functionality and preventing the key signalling being broadcast or successfully received on the network. 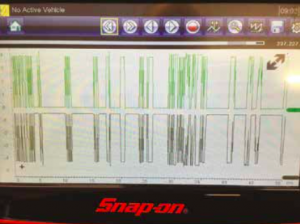 Removing and disconnecting the HVAC unit restored the comforts network to ‘2 wire’ mode and allowed the key re-programming procedure to be carried out. A new replacement HVAC control panel was then ordered and fitted and the network status double checked. A fix was confirmed as it now had ‘2 wire’ status, the HVAC was displaying a ‘1’ status when viewed on VCDS and a correct network waveform was viewed on the scope, see Figure 3 – Post repair waveform showing Comforts Network back online.
Figure 4 – Replacement HVAC display panel restored Comforts Network. 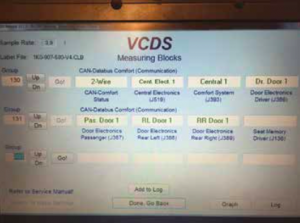