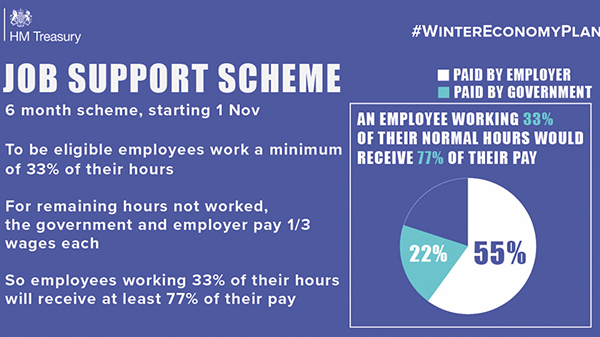 Firms can claim both the jobs support scheme and the jobs retention bonus, and a grant for self-employed workers will be extended on similar terms. Steve Nash, CEO of the Institute of the Motor industry, had this to say in response to the Chancellor’s statement:

“Rishi Sunak is in an unenviable position – there are many clamouring at his door for support. But his Job Support Scheme will certainly be welcomed by businesses in the automotive sector who face the enormous challenge of delivering a quality service whilst managing costs in the face of reduced turnover. ONS data for earlier this month showed that around 2% of jobs in the sector have been made permanently redundant with potentially an additional 7,200 planned by the end of this month. And approximately 88,500 jobs remained on furlough earlier this month, 14% of jobs in the sector.

“The Chancellor’s new scheme should therefore provide some respite – after all, it’s crucial that individuals and families who don’t want to use public transport during this difficult time, but still need to get out for the school run, shopping and supporting family members, can have access to professional services to stay safe on the roads.”

Sunak also announced an extension on the repayment of state-backed business loans from six to ten years, effectively halving repayments. Interest-only payments can be made, and firms in “real trouble” can suspend their pay-outs. All of the government’s state-backed loan schemes will be extended until the end of 2020. VAT bills will also be able to be paid over 11 separate payments.