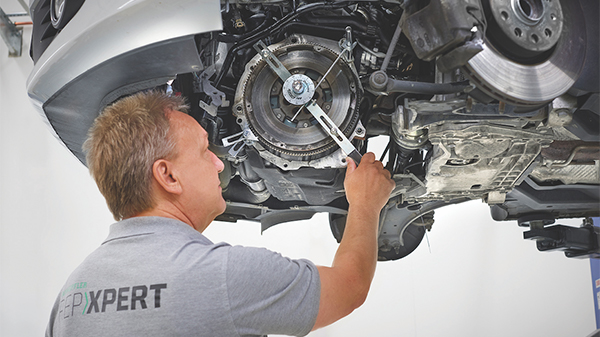 Focussing on ancillaries, rather than the traditional three-piece kit alone, Rob Marshall asks if a potential for customer conflict can be turned into a positive opportunity.

As with many other repairs (even outside of the car industry), many customers tend to prioritise the ‘three Cs’, when it comes to clutch replacement. ‘Cheap, Cheap, Cheap’ is a common mantra, especially when certain car owners might have no appreciation about what a clutch is, let alone the intricate procedures of replacing one. Naturally, you may consider pandering to the race to the bottom mentality by providing the most inexpensive quotation just to get the work booked in. Stop! Cutting corners is bound to wipe out any potential profit, when an irate customer returns for ‘warranty work’ to be carried out at your expense. Indeed, costs can be shaved by fitting a cheaper ‘chocolate clutch’, which is likely to be inferior to an OE quality part, something that may harm your customer relations, as well as your profit margin. The warranty on ZF aftermarket Sachs branded clutch products is two years, unlimited mileage. Can you trust a cheap clutch to provide the same support?

DIALOGUE AND THE ‘WHAT IF’S?’

As with many types of repair businesses, it has to be made clear to the customer from the outset that initial quotations are dependent on a number of factors, chief of which is the condition of otherwise invisible parts that are revealed, once work commences. Protect yourself against any ‘Rip Off’ accusations by stating your case from the outset. As labour tends to make up the majority of the invoice total, it is reasonable to insist that fitting potentially low quality parts is as much a false economy as ignoring any other failing components that become accessible, once the gearbox is removed.

Note that some parts are supplied, such as concentric clutch slave cylinders, but the fitting of which (not forgetting subsequent bleeding) needs to be considered in your quotation. Additionally, based on your experience of a particular make and model, you may factor in parts that are very likely to need renewing. ZF aftermarket told us:

“Where there is a known problem, or wear item, related to an application, additional parts (such as a release bearing guide tube) may also be included in the kit.”

Offering an extra service, such as replacing a weeping crankshaft oil seal, should help garner customer faith that you have their best interests at heart. It may also protect you against potentially non-related comeback, such as ‘that oil leak was never there before you touched it’ class of accusation.

Workshop organisation is also part of the equation. Before work begins, a plan needs to be in place so that should any extra component be required, the amount of extra time that the immovable vehicle is occupying a ramp is reduced to a bare minimum. 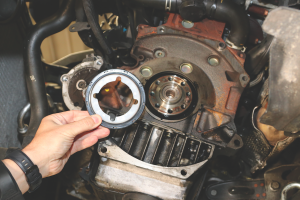 Replacing clutches is heavy and intensive work; having a selection of lifts and support tools to hand will make the job quicker, safer and faster.

GOING ROUND AND ROUND – THE FLYWHEEL DEBATE

Clutch kit aside, the Dual Mass Flywheel (DMF) tends to be the most expensive related part, fitted to many manual and automated manual gearboxes. Seeking mainly to reduce costs, the customer may have ‘been on the Internet’ and researched the potential benefits of replacing an OE fit DMF with a single mass alternative and matching clutch kit. The technical advantages of a DMF continue to be extolled (understandably) by DMF pioneer and OEM supplier, Schaeffler, (see Autotechnican July 2018 issue, pp45 and 46).

Late last year, Schaeffler reiterated the ‘hazards’ of substituting a standard-fit DMF and commented that its REPXPERTs are concerned that DMF-equipped transmissions are being converted with solid flywheel kits. It argues that they do not offer full protection to the driveline especially, because:

“The DMF is designed in such a way as to enable up to 100° vibration damping – we actually have three in the range that go up to 186° – as opposed to the 29° from the long travel damper used in the conversion kits.”

“Converting the system, while deemed a cheaper ‘solution’, can lead to… a heavier pedal feel (because the genuine self- adjusting clutch has been removed), premature clutch failure (as the clamp load has been reduced), as well as potential release system and major component failure.” 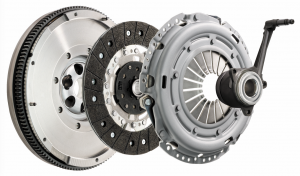 This Sachs branded clutch kit includes the DMF (note that the clutch friction disc has no springs because the damping properties are performed by the DMF) as well as the concentric clutch slave cylinder. Yet, extra parts may be required.

“As customers were seeking a reliable solution <to the DMF>, Valeo designed an efficient solution: Valeo KIT4PTM. This product has been in the spare parts market since 2002 with high success and customer satisfaction. The rigid flywheel and clutch kit combination is designed for today’s high engine torques and capable of filtering the engine acyclisms. Valeo KIT4PTM ensures correct clutch functionality under all driving conditions, filters out the vibration and noise generated by the engine, and fully protects the engine and the gearbox.”

Valeo claims that a further advantage is that its High Efficiency Clutches that are fitted to its single mass flywheel kits do not require any special fitting tool, compared to Self Adjusting Clutch designs. The company reasons that its clutches last longer, thanks not only to reduced operating temperatures, but also due to the clutch kits boasting reinforced facings and covers. The French company states also that, because fuel consumption is linked primarily to the weight and inertia, its single mass conversion kit offers similar fuel consumption, because it weighs the same as the equivalent DMF and clutch kit.

Valeo’s single mass conversion kits are suitable only for passenger car engines that produce up to 270Nm of torque and 350Nm for commercial vehicles.

DMF life will be reduced severely in certain situations. If the engine has been tuned, or loads are towed that exceed the recommended maximum, the flywheel (and clutch) will experience stresses they were not designed to tolerate. Situations may arise in which you may wish to agree to modify the car from its OE specification but you must help the customer to make an educated choice, provide clear advice about potential consequences (including informing any insurance company of the modification and explaining that the car may ‘feel’ different to drive) and also discuss the limits of your liability, without breaching the customer’s statutory rights. Obviously, consult the advice of your parts supplier, who will be able to advise you of their warranties and if it will settle your labour costs, should an unhappy customer bring the vehicle back. 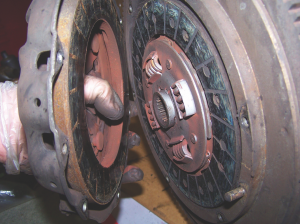 The traditional type diaphragm clutch has been in use for many decades (pictured, is a friction plate from a 1978 Triumph Spitfire), where the friction disc performs a degree of shock absorption, as evident by the centre springs. 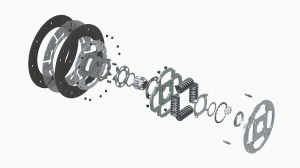