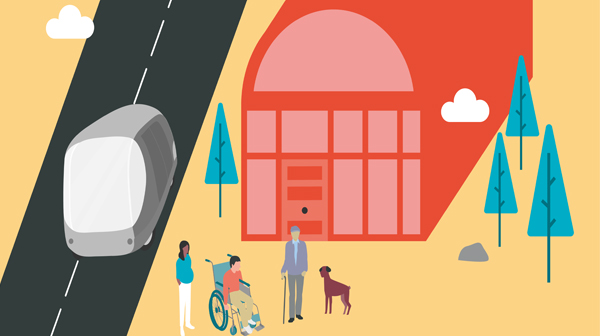 Research conducted by AXA UK sought consumer opinions on driverless cars and found that only a quarter believes they will improve road safety, despite 90% of accidents being caused by human error.

The insurance firm suggests confusion is fuelling this scepticism, with only a third of respondents able to correctly identify the definition of a driverless car. To help motorists understand driverless technology, AXA has published a video explaining the Society of Automotive Engineers (SAE) Levels, designed to clarify increasing vehicle autonomy.

Only 27% of UK residents believe driverless cars will lead to fewer accidents on the roads, despite 90% of accidents being caused by human error. When asked about other benefits driverless cars could potentially provide, only a third of the 2,000 respondents said they would be better for the environment, while just a quarter said they would improve safety for pedestrians.

The research follows a Euro NCAP and Thatcham study that found 71% believe fully autonomous vehicles are already on the market, even though the government aren’t aiming for them to be on our roads for several years.

DEFINITION OF A DRIVERLESS CAR:

The most widely used references to vehicle autonomy are the Society of Automotive Engineers (SAE) Levels. When asked to choose a definition that best described a driverless car, only a third chose the correct SAE Level 5 (Fully Autonomous): “A vehicle that can make informed decisions and control itself and does not require a driver to take control in any situation as it is able to adapt to its surroundings.” Level 4 (Highly Autonomous) behave similarly, but only in very specific defined situations.

One in ten chose: “A vehicle that has one form of autonomous technology, such as steering, speed or braking control”, which is SAE Level 1 and only provides limited driver assistance. While driverless cars aren’t yet available, millions of motorists are already using autonomous technology on a daily basis without even realising, including cruise control, lane assist and self-parking.

However, when asked about the types of technology they were aware of, more than a quarter of respondents said they were unaware of cruise control. Three quarters went on to say they don’t think they’d ever used cruise control, despite it being readily available in most modern cars.

On the other hand, 61% said that cruise control has already improved road safety, with a further 82% and 71% feeling the same for lane assist and parking assist. What’s more, 84% said they think Autonomous Emergency Braking (AEB), which the EU is currently calling to be installed in all new vehicles as standard, will also improve safety on our roads.

“Driverless cars will revolutionise transport for the better, making our roads safer but also creating mobility solutions for people who are unable to drive. It is not surprising however, that new technology can be confusing and even lead to scepticism. What is clear, is that we need to educate motorists on the benefits of autonomous vehicles because consumer trust will be vital to their success.” David Williams, Technical Director, AXA UK