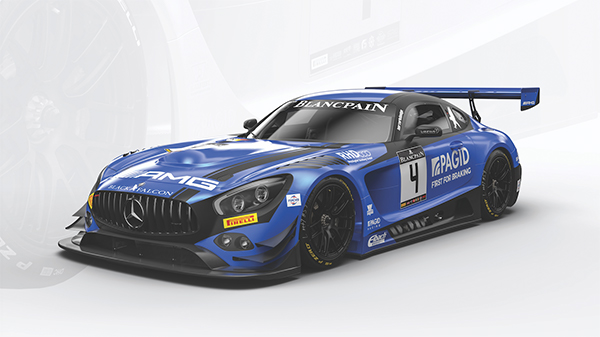 Creating friction in the racing scene – Pagid at Silverstone

I’m stood next to the Hangar Straight, right where the world- renowned Silverstone circuit deviates its course and turns hard right on a corner called Stowe. Thundering towards me is the unmistakable deep burbling growl of a Mercedes-AMG GT3.

Travelling at close to 160 mph, it’s about to scrub off approximately 80 mph of speed in around 50 metres. The brakes glow orange as the driver smashes the brake pedal, with temperatures reaching stratospheric levels. The forces involved are immense, and the car will continue to do this multiple times a lap for the next three hours alongside 47 other GT3 cars, all vying for the same piece of asphalt.

The Blancpain GT Series is, and there’s no other way to say this, mental. With GT3 cars costing over €400,000, plus running costs. To see so many of them racing together at break-neck speed is a sight to behold.

The series is split into two distinctly different types of racing. Utilising the same machinery, there’s the Blancpain GT World Challenge Europe with two 60-minute races each event weekend and the GT Endurance Cup, with one three-hour race. The championship is held at such iconic venues as the Nürburgring, Zandvoort and the Hungaroring, plus there’s also a flagship 24-hour race at Spa-Francorchamps. 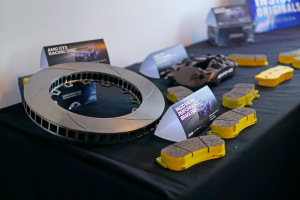 This time though, it’s the turn of Silverstone, and we are guests of aftermarket braking brand Pagid, (manufactured by TMD Friction), the official braking partner to The Black Falcon team with its Mercedes-AMG GT3 PRO class car. The Pagid team were proudly hosting a trackside hospitality day for over 100 lucky workshop customers, having won a recent competition through exclusive distributor Euro Car Parts. The Pagid Racing division supplies brake parts to the team throughout the season, providing an excellent opportunity for us to get up close to the action and see what makes a professional race team tick.

Luckily, in a rare occurrence for Northamptonshire in May, the weather is perfect. Sadly, in an equally scarce event, the qualifying result isn’t. In the first two races this season, BLACK FALCON has won one race in the 60-minute races series and came third in the first of the longer races at Monza. However, being caught out by a red flag when an Audi spins into the gravel during the first part of qualifying this weekend, means the Pagid-livered GT3 racer is languishing down in 37th on the grid. Still, it will make the race more than a bit interesting.

As the car enters parc fermé – an allotted time where no work is allowed to be done on the cars in-between qualifying and the race – the drivers sit down for their briefing, the strategists are working through various permutations for the afternoon ahead and the team manager goes to talk to the race officials. A perfect time to sit down with Team Technical Director, Marvin Wagner. 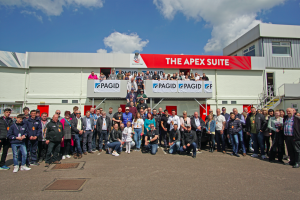 Marvin tells me that his role is to essentially spot if anything is going in the wrong direction, and if so, assist.

“I try to support the team as much as possible across all aspects. It can be with the car performance, a special request from one of the drivers or even in the kitchen! It doesn’t matter what, I deal with things as they happen.”

After the unfortunate qualifying session, Marvin is philosophical about the team’s chances: “It’s early in the season and we did well [at the previous race] in Monza. You will not win every round, but we want to win the championship again as we did in 2018, so we need to finish in the top 10, where the points are awarded, in every race.” 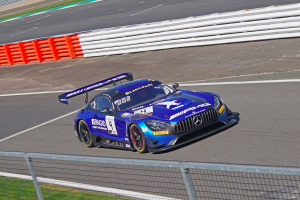 During any race event, braking performance is critical. As I will learn by standing trackside, the straight line speed and noise of the cars is impressive, but the relatively short braking distances are what boggles the mind when compared to road cars.

“Road car brake pads have different tasks,”explains Marvin. “Race car brake pads are very pure, with the only goal of performance. Our operating brake temperature is between 300°C and 800°C. We are always wanting the brakes to be very hot. Whereas, on a road car, they have to work well in -20°C as well as hot conditions.

“One important aspect of race car braking is the feedback and feeling inspires confidence in the drivers. If they are happy, then their confidence increases and the same is true of Pagid road car brakes. To that end, we use the same brakes for the whole race, but during a 24-hour event, we do at least one brake change. Across the season – including practice, testing and qualifying – we use on average 100 Pagid Racing front brake pads and 30 on the rear too.”

On that note, Marvin persuades me to try one of Team Black Falcon’s yoghurt energy drinks and leaves to tend to something far more demanding than answering my questions. Meanwhile, my head is spinning at the costs for the brake pads each season. I’ve also got to leave, as the race is about to begin.

If you’ve never spectated at a Blancpain GT race event and are interested in motorsport, I urge you to try and visit when possible. The sight of over 40 race cars from prestigious brands such as Mercedes-AMG, Porsche, Ferrari and Lamborghini tearing around a race circuit is joyous. The noise, earth- shattering.

“When you see the racing in person, it really makes you appreciate the closeness of competition and the effort that goes into it. The technology is mega – I’m sure our customers will be safe in the knowledge that Pagid tests their brakes to the extreme on the track,” enthuses Jason Brown and John Cullum of Wheels Van Centres.

As the race enters the midpoint, I can start to see the strategies being played out, and the Pagid-adorned Team Black Falcon Mercedes-AMG is rising through the ranks. I enjoy watching the start-finish straight with the invited guests, but also walk a full lap of the track, enabling me to get close to the action.

Phil Woodcock, Key Accounts Manager of Pagid, is anxiously watching the timing screens: “They are close to the top 10 now, this will be a great result considering where they started from. It’s been really amazing to see so many happy Pagid customers, and working with Team Black Falcon to drive the performance of the car and our aftermarket products forward is very satisfying. We just need a strong finish now!” 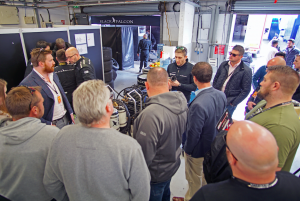 In the end, after a gruelling event against the best competition in the world, the Pagid car driven by Maro Engel, Luca Stolz and Yelmer Buurman rises to finish in seventh position. Passing 30 other cars, a suite of professional drivers – including hobbyists Top Gear presenter Chris Harris and ex-Manchester United goalkeeper Fabien Barthez (yes, very random) – is no mean feat and sets the team up for a championship charge.

The mood of the team at the end of the race is of relief, rather than jubilation, but there’s one person with a massive grin on his face. Phil Woodcock is a very happy man. He’s shown how impressive Pagid brake parts can be, his customers are thankful and even the sun came out to celebrate.