LATEST NEWS
You are at:Home»Article»Dave Massey investigates why a customer’s Porsche is underperforming

It’s always great to get the new year off to a flying start and 2017 is no exception. When this Porsche 997 twin turbo was presented for some diagnostic work and eventual tuning, having been recently purchased by a regular and uncompromising customer.
This particular car is the formidable 2008 Porsche 997 (Gen 1) Cabriolet Tiptronic, which as standard boasts 480 bhp and was the first petrol car to come with variable geometry turbos, providing ultra-fast turbo spool up times for blistering acceleration and performance. The stock performance figures quoted by Porsche suggests this car is capable of 0-60 mph in just 3.9 seconds and will reach a top speed of 196 mph!
FALLING SHORT
Aesthetically, the car needed very little attention but we were tasked with removing the decals, a good call in my opinion, and to replace both the head and tail lights due to misting/fading, which is par for the course on a car this age.
This car has quite a high spec already, boasting a supposed 530 bhp, achieved with an Intake Plenum ‘Competition’ Y pipe, 82mm intake turbo IPD, air induction system, intercoolers, 200-cell sports cat and fitted with an aftermarket ECU. This all sounds good but the car didn’t perform anywhere near to what  it boasts in the advert, failing to deliver smooth power or drivability with also what appeared to be excessive noise from the exhaust system.
We were tasked with identifying the problem and to check the performance mods were suitable and capable of
delivering the quoted figures, while ensuring 100% reliability. After an initial smoke test in the exhaust system, we
quickly identified the location of the exhaust leak to a weld on the aftermarket manifold. Considering the general
condition of the exhaust system we  advised that the entire system was replaced. After exploring all the different
options, we decided on a custom exhaust system – designed and installed by Geoff at Pipewerx, who is a real Da Vinci when it comes to custom exhaust systems and a perfectionist, whose work is second to none.
TURBO ISSUE 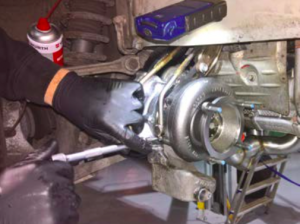 Whilst driving the car and carrying out some data logs, it quickly became apparent that the near side turbo was
howling at low speeds, which would  indicate either thrust bearing damage or being out of balance – neither scenario is very good and needs addressing. Upon closer inspection, it appeared to have had a turbo replaced on the O/S but for some reason the N/S turbo hadn’t, which is a little odd given the spec of the car. It’s worth noting that the bearing housing on the 997 twin turbos are notorious for corrosion and cause oil consumption and turbo noise, which ultimately leads to catastrophic failure. 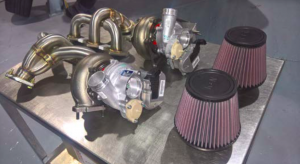 GET SET FOR A GT2
We invited the customer down to have a look at the condition of the turbos and manifold. In the meantime, I put together a mouth-watering proposition of converting his 997 twin Gen 1 into a full blown GT2 with hybrid turbos capable of 650+ horsepower! Utilising the existing hardware, bar the exhaust system and manifolds, this modification would require two brand new GT2 turbos direct from Garrett and then modifying, commonly known as a hybrid, utilising uprated thrust bearings and bigger compressor wheels along with our custom ECU software tuned on the rolling road.
The 997 Gen 1 engines are reliable up to 700 bhp on stock internals, when tuned correctly using the right parts, so I set a target of a heathy 650 bhp using 99 octane fuel, which shall be proven with dyno figures upon completion of the project.  After inviting the customer down to visit the car and inspect the components, he gave us authority to proceed with the work and paid a substantial deposit towards the parts. I must give credit where credit is due and I would also like to congratulate the car sales for contributing towards the repairs to a value of
£6,000, which took care of all the aesthetic issues and faulty exhaust system. The rest of the modification work and tuning was to be covered by the customer. It’s not often you see car sales companies willingly contribute towards such repairs and more often than not we’re spending unaccountable amounts of time on the phone with ‘difficult’ warranty companies, who apparently only pay £35 per hour labour rate. I mean my memory isn’t that great at the best of times but I’m pretty sure that when my dad established ADS back in 1985 that’s what he
charged then, but I was only 4-years old, so could be wrong.
BACK TO BASICS
We started by carrying out a full major service, including spark plugs (made easier once the turbos were off ), performance filter replacements, engine oil flush, fuel filters, pollen filters and safety inspection. It’s worth noting we upgraded the anchors a bit by means of a Pagid brake pad upgrade and fluid change. 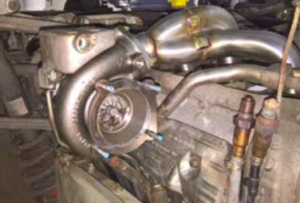 I always say that tuning a car is similar to building a house and before carrying out any tuning or modification work you must start with the foundations. We always carry out a full health check and complete any necessary repair work or servicing to ensure the best results and reliability – you can only build quality in, you can’t add it later. Recently, we have turned away Stage 1 tuning work due to the customer’s reluctance to spend money on getting the basics right first. Believe me when I say, it’s better to walk away from a job and avoid trouble than to accept any money from the customer for any modifications when there are underlying problems. Thankfully, this project is totally different and the customer has willingly agreed to all of the above work and paid upfront for parts, which makes a project like this so much easier and a pleasure to do.