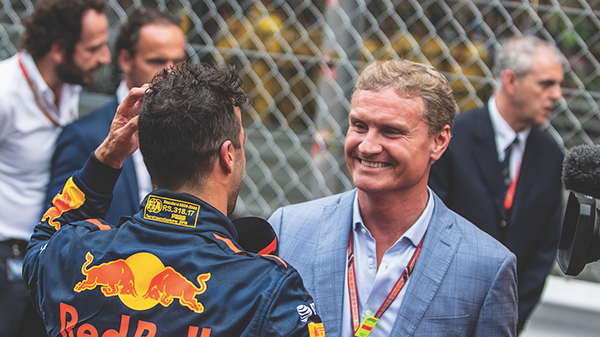 David Coulthard has always been a class act – both on and off the racetrack. The square-jawed Scot spent 15 years as one of Formula One’s top drivers and won the Monaco Grand Prix twice as proof of his ability to master the toughest tracks in motor racing. Coulthard enjoyed his best racing years as Mika Hakkinen’s teammate at McLaren Mercedes, where the latter won back-to back world titles in 1998-99. Coulthard was instrumental in helping the Finnish pilot fend off Michael Schumacher and Ferrari during a time when Formula One saw some of the most spirited battles in its history between Hakkinen and Schumacher.

Coulthard honed his racing ambitions in karting (his father is a former world champion karter) as an 11- year- old boy and slowly worked his way up the ranks before reaching the Formula Ford series in 1989, where he won the first ever McLaren/Autosport Young Driver of the Year award.

In 1993, he was hired as a test driver for the world champion Williams/Renault team and got his start in Formula One in 1994 after Ayrton Senna’s tragic death at Imola, after which he raced alongside future world champion Damon Hill to complete the F1 season for the team. After winning his first F1 race in Portugal in 1995, he caught the attention of McLaren team boss Ron Dennis who signed him up for the 1996 season. He and McLaren teammate Mika Hakkinen would go on to form one of the most successful and respected F1 partnerships in history.

Having retired from the sport in 2008, Coulthard went onto serve as a BBC F1 commentator. When Channel 4 took over the broadcast rights, his Whisper Films production company was hired to take charge of its Formula One coverage and was signed to provide race commentary and pre- and post-race coverage.

Q: David, you achieved considerable success as a Formula One driver, winning 15 races and the Monaco Grand Prix twice. Yet, you are best remembered as one-half of one of the greatest partnerships in F1 history when you and Mika Hakkinen drove for McLaren Mercedes. You were instrumental in helping Hakkinen win two consecutive drivers titles (1998-99). How did the partnership work?

COULTHARD: Mika was a very complete driver and we spent seven years as team-mates. We didn’t always see eye-to-eye but we knew that in order to get the best out of McLaren Mercedes we had to work together. I had certain qualities as a driver that he could learn from and he had many strengths that were superior to mine, from which I tried to learn from and improve. Together, we pushed each other forward.

Q: What other great Formula One pairings do you admire?

COULTHARD: I think Senna and Prost were one of the greatest teams ever and I remember how dominant they were when I was making my way into racing. They won 15 out of 16 races in 1988 and I have many great memories of Senna and Prost racing. They also had one of the best Formula One best ever built in the McLaren MP4-4, which had incredible horsepower and downforce.

Q: Does the sport suffer from a lack of rivalries today to compare to Senna-Prost or Hakkinen- Schumacher?

COULTHARD: I don’t think you can manufacture rivalries or competitiveness in any given sporting era. There’s no blueprint to emulate the past. We have to remind ourselves that the youngsters watching the sport a few years ago would have thought that the rivalry between Nico Rosberg and Lewis Hamilton is the greatest ever. Then they’d eventually discover the great rivalries of the past like Prost and Senna just like I did. There are elements in the sport today which are not as appealing or dramatic as they were in the past. There’s nothing like the kind of personal rivalry that you had, in tennis for example, between McEnroe and Borg. 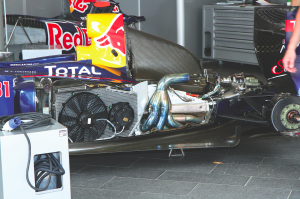 Q: Do you think you might have won a world championship at McLaren Mercedes had Hakkinen left to join another team?

COULTHARD: I don’t think I had the same overall talent as Mika. I think I was affected, because of the nature of my personality, by having to negotiate and define my position with the team, whereas Mika had a very long and close relationship with Ron Dennis. Mika was almost killed (at Adelaide in 1995 – Ed) before I joined the team and Ron spent weeks at Mika’s side in the hospital while Mika was in an induced coma with a fractured skull. Ron was there for Mika’s rehabilitation, rebuilding his desire to get back into a race car. I respected that relationship. You cannot expect to have that kind of a relationship with the team owner that Mika had with Ron. Still, subconsciously, it affects you. In the end, I did everything I could to lobby my position within the team but Ron did the right thing in backing Mika. I have no issue with that and I don’t feel hard done by.

Q: Were you and Mika good friends off the track?

COULTHARD: We always spent plenty of time socialising. Today, Mika and I do promotional events together and we both have sponsorship contracts with Mercedes Benz and UBS.

Q: Do you have a favourite Grand Prix circuit?

COULTHARD: Monaco is one of my favourite circuits because it poses a terrific challenge, there is no room for error. You have to maintain total concentration and be aware of every millimetre of your car and the track because you’re going to come incredibly close to the barriers on every lap. You can easily crash at Turn One or at Casino Square. I’m very proud of having won in Monaco but I also remember having crashed there. There’s nothing else like Monaco – for me it’s the most exciting race of the year. I also like the circuits in Melbourne, Montreal, and Malaysia where you have the tracks in the heart of those cities, especially in Melbourne. 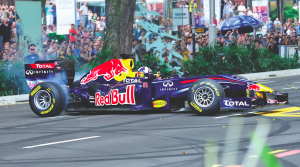 Q: Who were the biggest influences or mentors when you were starting out in racing?

COULTHARD: My father, of course, was a great supporter. He instilled in me a very strong work ethic and was there to let me know if he didn’t think I was working hard enough.

Q: What about Jackie Stewart?

COULTHARD: Jackie Stewart became a big influence in my career when I was 17 and living in Scotland. I signed with his son’s company, Paul Stewart Racing, which eventually led to getting a test drive with Williams. Jackie was very helpful and supportive for those three early years in my career. He obviously imparted a lot of his personal experience from his racing career before he went to work for ABC’s Wide World of Sports. His work as a commentator served as a good example for me when the opportunity arose and I learned very early on that doing commentary was a natural transition. 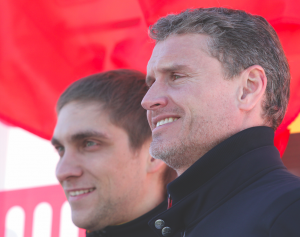 When in 2008 I was getting close to the end of my career, I went to see Jackie and make a sanity check to see whether I was making the right decision. He suggested that television was not only a great way to maintain a profile, which creates business opportunities for you, but also to give you a graceful entry back into day-to-day life.

Q: Do you regret not having won a world championship?

COULTHARD: No. I wasn’t an exceptional driver, but that doesn’t cause me any sleepless nights… I didn’t quite manage to drive as quickly as some of the other guys. I still managed to fulfil my potential and I was well rewarded financially for my effort. So, I won’t have any of the drivers complain about how difficult it is.