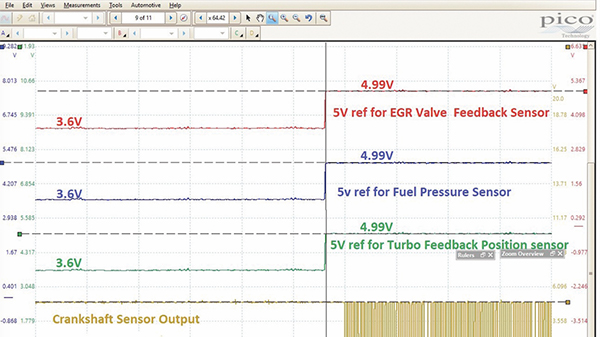 When a vehicle is presented with multiple faults it is difficult to know which one to tackle first, or which fault is going to relate to the customer concern. A classic example was an Audi Q5 which was here at Gotboost’s workshop recently.

The customer complaint was an intermittent lack of performance accompanied by warning lights on the dashboard. The fault started happening occasionally a few months ago but was now becoming more frequent and occurred on all trips lasting over 20 minutes. The customer had an EOBD code reader and was able to extract and clear the fault codes but was unable to determine the cause from the codes alone.

At the time the vehicle was presented, the fault had not occurred on that journey. So, a test drive was conducted until the symptoms became apparent. The following five codes were stored in the Engine Electronics Module:

Some vehicles can store more than just the code and the fault description when a failure occurs, and this additional data is presented in a ‘freeze frame’. A bit like the black box on an airplane, it captures a snapshot of the operating conditions  at the time the fault code was triggered. The extent of the data captured varies but it can provide some useful additional information. This can be used in a number of ways and should always be saved before clearing the diagnostic data.

In this case, each code description was accompanied by the following information:

The date, time and mileage counters are useful for matching codes with a customer complaint, enabling the technician to select the codes that arose at the same time as the customer outlined during the diagnostic interview. The fault priority is a classification used by VAG to rank the fault on its influence on drivability as outlined in the table.

The date, time and mileage counters are useful for matching codes with a customer complaint, enabling the technician to select the codes that arose at the same time as the customer outlined during the diagnostic interview. The fault priority is a classification used by VAG to rank the fault on its influence on drivability as outlined in the table. 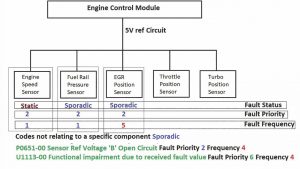 The malfunction frequency counter displays the number of times the fault has occurred since the diagnostic data was last cleared. The unlearning counter counts back from the number of drive cycles that must be completed before the fault clears itself (Maximum 255, but it can be less depending on the faultcode). Each time a drive cycle is completed without the fault occurring the counter counts back, a useful indicator of a faultthat is no longer present but has not been cleared using a scan tool. The rest of the data is self-explanatory and concerns itself with the operating conditions of the engine when the fault triggered the code.

The owner of the Q5 had unwittingly removed much of this additional evidence by clearing the codes, which also clears the freeze frame data. A useful piece of information is the fault status, Static or Sporadic in this case, is used to describe whether the fault is permanent or intermittent in nature.

Using the additional information presented we were able to build a picture of what was happening, see Figure 1.

Here’s a summary of what we know from just the fault codes, freeze frame data and a quick look at a wiring diagram: 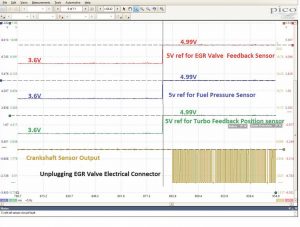 Knowing this enables us to develop a test plan to prove what is causing the fault. The most likely suspect is the EGR Valve, followed by the engine speed sensor, based on the information provided by the freeze frame relating to the frequency and status of the monitor failures.
Using an oscilloscope, the 5V reference was measured on three of the circuits concerned and the engine speed signal hall output. After a short period of driving the Audi dropped into limp home mode, the 5V reference had been compromised as shown in the screen capture. Unplugging the EGR valve electrical connector restored the 5V reference voltage and restored the engine speed signal as shown in the screen capture, Figure 2. Removing the EGR Valve cover presented us with further evidence, if it was needed, for the cause of the failing 5V reference, see Figure 3.