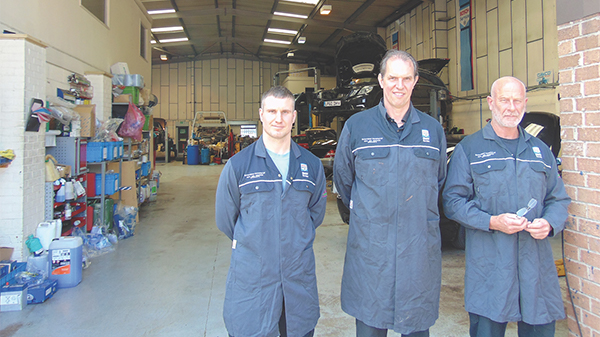 Diagnostic results in a flash

Burton Motor Workshop, a large, independent MOT/repair and used car sales business in Burton-on-Trent, has evolved alongside vehicle technology over the years, with owner Jeremy Scott investing in the latest diagnostic equipment and training for his staff, to ensure they remain competitive with local dealers. When we visit, there are three diagnostic jobs in the workshop where Burton Motors are the second or third garage the vehicle has been to, they often get referrals from other local garages.

This time last year, they invested in the Delphi DS-Flash Pass- Through package, which enables independents to undertake dealer-level diagnostics and services. It facilitates online access to vehicle manufacturer’s websites, enabling workshops to reprogram and update electronic control units.

We spoke with technicians Michael Rowland and Carl Atkinson to see how they are getting on with the equipment.

In a nutshell, what does the DS-Flash package enable you to do?

Michael Rowland (MR): “The interface enables you to access the dealer – Volkswagen Audi Group, Vauxhall, Toyota, Jaguar Land Rover… It comes updated with everything that each particular manufacturer requires to run their Pass-Thru system. First, you have to set up an account with BMW; with VAG you have to get your user ID, get your GeKo license [this allows teaching of engine immobiliser components and keys] to be able to use their software. Once you are up and running, you can use it as a diagnostic tool.”

Was it easy to set up?

MR: “There is no user manual, as such. It’s a case of playing with it. Every manufacturer is different; how it’s set up, what it allows you to do, what it doesn’t – and it’s down to you to find out what it’s capable of but Delphi’s Technical support team are there to help you get set up.”

What is the benefit of using the DS-Flash over a dealer tool?

MR: “For us, it’s the ability to carry out software updates and code.”

Carl Atkinson (CA): “If you buy the dealer tool on its own, you are restricted to a computer per manufacturer, whereas what Delphi has managed to do is partition the computer.”

MR: “We are a Bosch Car Service garage, I attend regular courses and we bought the KTS 590 to get ready to do it ourselves [perform pass-thru] but each manufacturer wants the computer set up in a different way to the others, so we’d need a laptop that could run Toyota on, one for BMW, VAG and so on. Plus, you need to sit down, figure out what it needs, make the investment on each laptop… With the Delphi machine, although we’ve still got the Delphi interface to hook up to the various VMs, we’ve managed to hook up ICOM to that pass-thru computer, a BMW dealer level interface. Software updates are now a lot faster.”

Have you experienced any problems whilst using it? 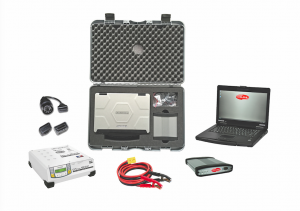 CA: “If you are struggling with a connection or there’s something not quite right about the configuration of the computer Delphi has a helpline so you can get the computer back online, so we don’t have to spend days messing about with it. When updating the BMW drivers, as it loaded a Java update onto our system,
it crashed. We would have had to sit down and work our way through that, whereas we could just leave it. We rang the Delphi helpline, they took us through a few items then they took control of the computer and dealt with BMW direct. We wouldn’t have had the time… they were just brilliant.”

MR: “Two days after calling Delphi, they had BMW Germany involved in it, it was a massive issue. There’s no way Carl and I would have been able to sort that.” 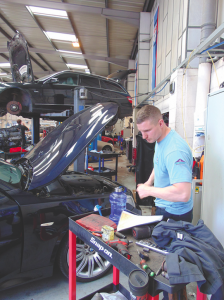 CA: “We might have moved a bit away from the Flash box for BMW, but that’s our main business. If we were a general workshop, not specialising in BMW, we wouldn’t have invested in ICOM, the BMW interface, it’s just that its quicker for us…. There are some big BMW software update files that can take days.”

MR: “We use the Flash every day and we can’t afford to be without it for that time.”

“We’ve got new broadband, it’s about 82 MBPS now and that’s made a massive difference. You really have to have the infrastructure in place.”

How has the DS-Flash impacted on the business?

MR: “We specialise in Mercedes, VMW and VAG. We were in limbo… we were sending work elsewhere, we knew pass-thru was the way forward. If you specialise in something, you have to operate at dealer level. Couple of phone calls later, we had a demonstration in the workshop and we knew straightaway that was the one.”

Is it mainly used for software updates?

MR: “We mainly use it for BMWs, we tend to get a lot of them. Every manufacturer is different in how they run their online platform tool, but BMW takes a read of all the control units and a full identification. It will generate a fault code list from that and generate test plans. I’ve learnt it can make you lazy. You’ve still got to use your diagnostic process. It will be specific, in the sense that sometimes the CAS (BMW antitheft alarm system) goes out of alignment. I had one where another garage had constantly been starting it, as it was a non-runner. That’s thrown the CAS out of line with the DDE [Digital Diesel Electronics system manages all engine functions in BMW diesel models]. So, it generated the CAS alignment fault code and it instantly took me to realign the CAS and that was all within half hour.”

CA: “With BMW, once you have a fault code locked, it will give you a test plan and if you follow it, it will ask you to test something and lead you to where that fault lies. These cars are so clever, think how many times your computer will do a Windows or OS update, a car’s the same. A lot of faults can come down to a software issue rather than a physical fault.”

Can you give us an example of how the DS-Flash was particularly helpful with diagnostics?

MR: “It attached a photo of the live data of the battery block that had gone under voltage. You can take it with you and see the live data, so we could pinpoint which cells were dropping out. We just went in, ripped the battery out, ordered a new cell. So that’s one job we’d never have been able to do without that tool. When you think that a battery replacement would have been four grand? Seven? He came to us from the main dealer. The dealers do us a big favour by not doing things quite right!”

Paul Sinderberry, Delphi Technical Sales Manager, admits it can be a complicated tool to use because you’re accessing VM software and they all differ in their set up but for garages who are already heavily involved in diagnostics, it’s capabilities can prove very lucrative. “Many garages who will buy this product are workshops who are already doing a lot of diagnostics and they want to take their business to the next level – they may be doing diagnostic work for other workshops,” Paul explains. “One of the great things with the DS-Flash and using the OE software is that you get very in-depth diagnostics. When you have to replace a control unit, it normally means a trip to the dealer and dealerships tend to put independent garages to the back of the queue and you have to wait days to get it programmed.” 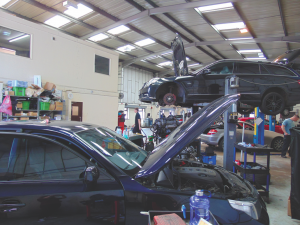 Customers get a 12-month support package with the equipment, support via the technical helpline and a full day of training, for anybody that’s maybe not used to vehicle manufacturer software. They can come along, set the accounts up, install the software on the day and get some basic user interface training – how to navigate the websites and the software. It is a complex product and to use it to its full potential you need to understand the ins and outs of it – the training incorporates an overview of what pass-thru is and its capabilities.

Delphi’s VE2 & VE3 courses ensure technicians are up to speed with the principles of EOBD, ECU communication and CAN protocols. This level of knowledge is essential to ensuring that they get the most out of the DS Flash.