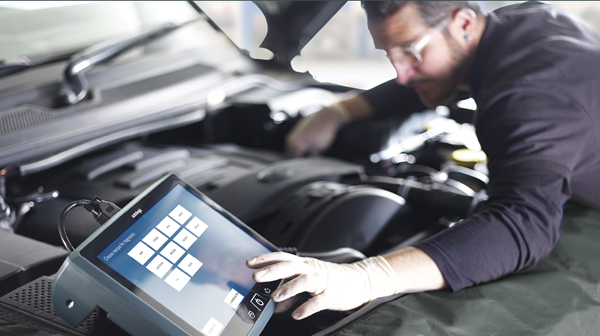 Diagnostics: Expert help is at hand

Autotechnician’s Nicola St Clair meets Autologic’s Fault 2 Fix Team to explore the future of diagnostic support
The goal for any independent workshop is to fix the most number of cars in the shortest time possible for the maximum profit. But that’s easier said than done when working on the latest vehicles and you come up against barriers such as component protection and face the daunting prospect of setting up Pass-Thru in order to retain jobs in-house. And this is where Autologic steps in with its Vehicle Diagnostic Support via the Assist service – providing its customers with direct access to master technicians who have an impressive dealer trained background, so specialise in the leading European marques and investigate the intricacies of challenging jobs technicians face in the workshop and quickly guide them to that all important first-time fix.

You can either log a vehicle’s vital stats in an email, send details straight from your AssistPlus device, use its mobile app or call them directly on the phone. Each job is directed to the best suited person in the team and they average a 20-minute response time – they typically take 20 minutes to reach a fix and deal with in excess of 500 cases each day. Impressive work.

With Autologic’s legacy product, customers could specify which brand support they required but the company has changed this with its AssistPlus device, offering all-brand support as part of the package, see side panel for European marques covered. This has resulted in existing customers, who previously specialised in one or two brands, now requesting support from other brand teams as customers broaden the scope of work taken on.
Tony Gill, Group Operations Director, heads up the support teams in the UK Head Office in Oxon, as well as the overseas teams in Australia and the U.S. We hook up so I can get the lowdown on what’s so special about its vehicle diagnostic support…

“As a company, we have focussed on specific brands and what our guys bring to the table is very specialist knowledge. Other service providers are very generalist – which will only get you so far. But it’s when you get into the real nitty gritty of ‘where is that part’, ‘where does that wire go’ or ‘are these two control units talking to each other’ and that’s the level we get to here at Autologic.”

How does the system work?
“There are various channels for customers to use to get in touch with us – they can phone us, use our app, go onto the website and request help online and if they are an AssistPlus customer they can request assistance directly from the tool. When a case is created it specifies the brand and drops into that team’s workflow in chronological order. I like to see it as like running a workshop, our cases are our stack of job cards and we have team leaders and line managers who manage the groups and work out how to get through them in the most efficient manner. Typically, we will work in chronological order, so first in will be first out, but there may be cases where, as it is in workshops, if a case comes in on a 20-year-old Land Rover then we give it to the old guy in Land Rover as he’s going to deal with it much more efficiently than the other guys.

“Calling the team up on the telephone may be the most convenient way of getting in touch but getting the details over to the team online ultimately saves time. When we then call them back we can get straight down to business and halve the time it takes to get the customer a fix solution.”
I imagine the staff here absolutely love their job; the challenge of getting to the bottom of that awkward fault…
“One of our brand values is passion. All of our guys really want to get it fixed but there is that added challenge of it being a virtual fix – you haven’t got the car in front of you and we’re very reliant on the feedback from customers. It’s that inherent trait within technicians of puzzle solving – they would see it as a personal failure if they didn’t manage to fix something and it’s the buzz they get when they do nail it.”
Are any marque specialists from an independent background?
“They all have dealer training, so we have accounts with all of the OEs. Somewhere around 80% have come through the dealer network but there is that 20% who have worked for themselves. Quite a few of them work on cars at the weekend, it’s something I almost actively encourage, it’s the one thing that they don’t get here is hands-on, unless they are training.”
Can you give an example of an issue the team has resolved that has baffled the customer and seemed complex, but turned out to be down to something rather simple?
“One example from when I was on the phones was a Discovery 3, where the traction control would kick in with light acceleration in a straight line on slightly loose surfaces. On the Discovery 3 the traction control system engages the 4-wheel drive. It was this that was engaging and had burnt the clutch out in the transfer case. At that time, the clutch pack wasn’t serviceable so it was another transfer case. Two weeks passed and it hadn’t fixed the problem. So we started looking at things like wheel speeds, lateral acceleration, Yaw rates, steering wheel angles – the normal things that would trigger traction controls. So I’m looking through all this stuff and everything looks spot on and no faults were being stored, apart from if it happened over a period of time the transfer case overheated and it would flag a code.

“So I asked about its history; the car was four-years-old and it clearly hadn’t been happening since it was built, so what else had gone wrong with it? They went back to quiz the customer and apparently, some months previously, it had a problem with the rear diff. I got the part number – the rear diff size on a Discovery 3 comes in three different ratios. I made the assumption they had put the wrong rear diff in and in a straight line, your front and rear axle will be travelling at different speeds, your wheel speed sensors pick that up and engage the centre diff because they think something’s slipping but, of course, it self-perpetuates because it’s locked up and actually now they are going at different speeds and it locks it up even more. There was no external, visual indication, so they took the diff out and actually counted what it should have been, I gave them the diff ratios, and lo and behold, it had the wrong diff in!”
Again, in so many instances, it comes down to the information you first gain from the customer. Are we getting to the point where independents are utilising their phones or tablets for video evidence, like the dealer networks increasingly do?
“We already have that ability. On AssistPlus, we can log in to the customer’s tool, so if they get really stuck, we can take over the device. We’re also looking to incorporate that into our App as well, so we can see what’s on their mobile camera. It’s got some basic augmented reality on it as well, so we can draw circles around areas that need checking.”

Finally, what are your views on the growing population of ‘connected cars’, workshops monitoring their customer’s vehicles using telematics and the new area of ‘prognostics’ whereby garages could call customers in to pre-empt a repair after seeing a problem in the vehicle’s live data?
“It is all very interesting and in some respects it seems a bit scary, but what I’d like to say to people is ultimately the driver still has a choice [of where to book the car in]. We’ve heard horror stories about the dealer network, that they’re not very good at customer service and people who prefer taking their cars to the independent workshop down the road. You can flash up whatever warning you like on a mobile phone, but it will be ‘thanks for telling me what might be happening, but I’m still gonna take it to the independent guy down the road’ because the driver knows he’ll be looked after.

“At that point, it’s going to be a parts replacement, software download or modification of a part. It hasn’t actually gone wrong yet but we’re pre-empting that it might do. It all sounds very nice but, outside of the warranty period, actually convincing somebody that they need to spend money on something that hasn’t happened yet… How hard a sell is that to the end user?”

**Exclusive offer to Autotechnician readers – Put them to the test!**
Autologic’s Fault 2 Fix Team provide Vehicle Diagnostics Support for its customers throughout the world and have access to over five million records containing fix data to complement their individual Master Technician expertise. In the last 12 months, they received over 300,000 cases and fixed over 1,200 different vehicle models with a 97.5% fix rate. Here’s your chance to put them to the test!
This ‘try before you buy’ concept, offers you up to FIVE FREE problematic car fixes, which you can submit to the team via the AssistMobile app. This strictly limited offer is available on a first-come first-served basis. Simply register at go.autologic.com/TBYB to download the free mobile app and submit your case!

Pass-Thru Support
Autologic provides Pass-Thru Support to get customers registered and set up – guiding them through the complexity of selecting a compatible PC and VCI, followed by advice of using the OE applications.
J2534, also known as Pass-Thru, ensures that independent workshops can work on modern cars and have cost-effective access to information and ECU programming downloads from vehicle manufacturer when required.
SAE J2534 is a communications standard adopted by vehicle manufacturers that enables compliant devices to reprogram vehicle ECUs. European and US legislation requires vehicle manufacturers to make vehicles, diagnostic and reprogramming applications that are compatible with J2534 devices.
Most modern cars can now be reprogrammed using the J2534 standard with access to manufacturer data.

AssistMobile collects details of a problematic car by scanning the VIN barcode and asking a few simple questions. It also uses some of the standard functions on your Smartphone, such as camera and flashlight, to provide additional benefits when you use AssistMobile.

NB. Premium videos such as service functions and fix help guides are only accessible to customers via the User Area of the website. Those registering for the Exclusive Offer will have full customer access for 3 months!

Thank you to Tony Gill, Richard Fletcher and Steve White for their time with Autotechnician at Autologic HQ.