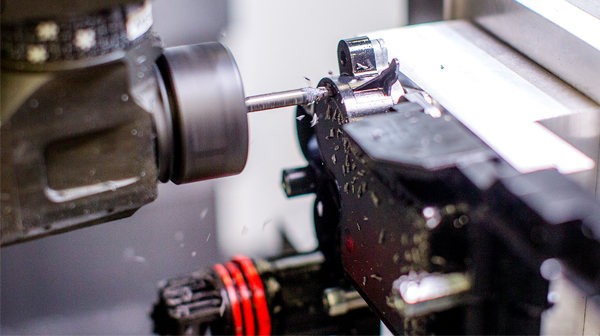 Engine ECUs: Thinking inside the box

With some new ECUs costing in excess of a thousand pounds and faulty items demanding specialist attention, Rob Marshall gives an overview of how they could be approached by the non-specialist independent technician.

Without the precise electronic management afforded by computers, modern cars would be unable to meet the low emissions standards demanded by politicians, let alone the performance and fuel economy levels dictated by customers. While engine Electronic Control Units (ECUs) remain as mysterious sealed metal boxes to the non-expert, they tend to be surprisingly reliable, despite their inner complexity. Do not presume that they are invincible. When things go wrong, specialist support is available to resolve the problem swiftly, cost-effectively and reliably. 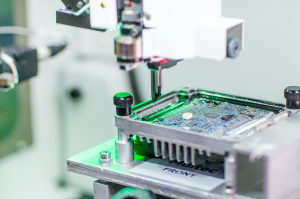 How do they fail?
“The main issue with ECUs,” explains Christian Planting of ACtronics Ltd., our technical consultant for this feature, “is that anything can go wrong and patterns of faults tend to be specific to the make and model of vehicle to which the ECU is fitted.”

Yet, the practical challenges of obtaining data about ECU hardware, never mind the software that runs them, has led to specialists, such as ACtronics, not only reverse-engineering solutions to common faults but also developing bespoke test and remanufacturing equipment (read more here). Christian reasons that ACtronics’ remanufactured ECUs are the best remanufacturing option, because fundamental flaws that were present in the new part are remedied at many hundreds of pounds less than the rate offered by a typical local main dealer trade counter for an OE replacement, which might exhibit the same intrinsic defect. It also extends the car’s life, while keeping costs relatively low.

“A further cost and time advantage of choosing our remanufactured option,” explains Christian, “is that any bespoke information to that one vehicle, including security details, is retained, which negates any reprogramming costs after the ECU has been refitted.”

As ACtronics finds that a noticeable number of ECUs it receives have been misdiagnosed as faulty,Christian admits that extra workshop time spent analysing the customer’s reported problem in more detail, could have solved the complaint more effectively. For example, while non-communication with the ECU might well be caused by the component being defective, an undiscovered wiring fault may be to blame, meaning that extra investigation is required and not just blind acceptance (or wrongful interpretation) of a fault code. Consider also that an intrinsic fault on a car can damage the replacement ECU. Combining ECUs with other components pose their own issues, such as the sealed ECU/air flow meter that shares the same moulding on certain pre-2001 Mercedes A-Class W168, where the air flow meter loses its accuracy over time and the ECU miscalculates the air/fuel ratio – more about which is detailed here. Even Mercedes-Benz realised the error of its ways and reverted to separate parts on subsequent models. 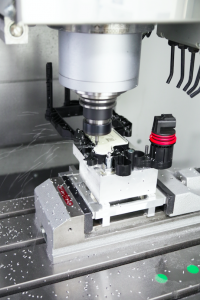 Not only can certain OE suppliers make things difficult, but carmakers also create headaches for both owner and repairer. With under-bonnet space being at a premium, some ECUs have been located in areas that seem to be almost deliberate ploys to shorten their lives. Aside from delicate internals being damaged by engine heat and vibration (ACtronics attributes one of the main reasons for poor reliability of Vauxhall’s Multec ECU is due to it being mounted to the inlet manifold, for example) water ingress is also a major issue. Certain BMW ECUs are situated within a plastic housing that can fill with water, whereas those fitted to the 2006-2013 Vauxhall Corsa/Combo 1.3 CDTi are positioned close to a water drain channel beneath the windscreen, which also afflicts certain 2011-2015 model year Volkswagen Passat ECUs as well. These are not isolated cases and the independent workshop can engineer preventative measures to keep moisture away from the electronics during routine servicing. 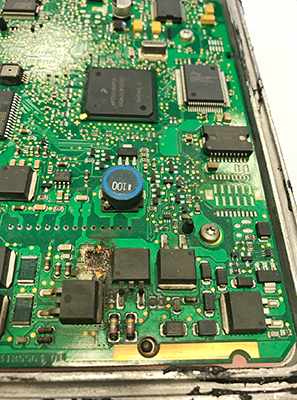 Not all ECU faults are this obvious

Some poorly-planned ECU positioning can almost encourage errors to be made by a workshop. Placing an uninsulated ECU very close to the battery is inviting disaster but, even if the positive terminal touches the earthed casing, the damaged unit could still be salvaged because the vehicle-specific data may still be stored. Yet, Christian is emphatic that technician training should emphasise how ECUs can be harmed during fault-finding procedures. While many of its internal components are designed to operate at five volts (or below), the forced introduction of twelve volts from a power probe being wielded randomly, for example, might ruin the circuitry. Similarly, general wiring damage can cause short-circuits within the car’s loom that can affect the ECU negatively and it can be easy to snag cables, when removing a major component. Similarly, a sudden power cut (or a reduction in supply voltage), when implementing software updates, can render the module useless, always employ a mains back-up power source in those circumstances.

While parts quality is an ongoing topic within the aftermarket, low-grade components can have negative repercussions too. For example, poorly-manufactured ignition coils can introduce fly-back voltages to the ECU that are far greater than those of the original design parameters, this can lead not only to physical internal damage but also to software corruption. Therefore, have confidence that your parts supplier insists on OE quality.

While employing the services of a dedicated ECU specialist, such as ACtronics, can save your customer hundreds of pounds, and is likely to result in a better-than-new component being fitted that can be guaranteed confidently, Christian advises that an ECU’s sensitivity to severe voltage drops in daily use emphasises the need for a healthy electrical system. As a failing battery can cause the ECU’s input voltage to dip considerably during engine cranking (and jump-starting some models presents its own hazards to ECU longevity, especially if the vehicle has been attempted to be jump started with the leads connected to the wrong terminals) the software can become corrupted. Therefore, subjecting a fully-charged battery to a discharge test and advising the owner to replace any ailing items prematurely, including alternators and drive belts, makes sound sense from customer service and preventative maintenance standpoints.