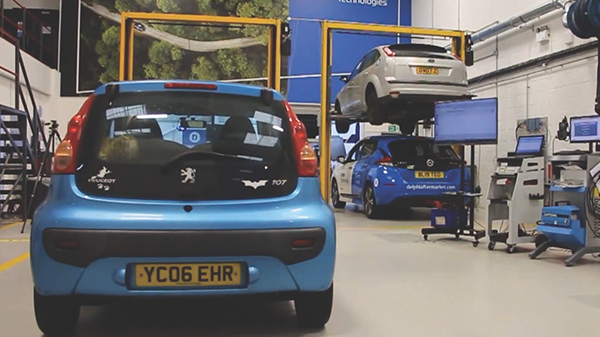 A Peugeot 107 (petrol) was presented with the EML illuminated, so the first step was to connect Delphi Technologies’ DS150 diagnostic tool and interrogate the engine management system. This revealed the fault code PO420, ‘catalyst system efficiency below threshold’ which sounds quite definitive but, because of the way information is fed to the engine management system, could still be caused by any one of a number of underlying faults. This is one of the codes that frequently steers technicians to begin replacing parts in an effort to eliminate the problem but, in this case, the Delphi diagnostic system was used to gain a deeper understanding of where the actual problem was, in order to fix it first time around.

Like many vehicles, the Peugeot 107 has a Lambda (oxygen) sensor between the engine and the catalyst, plus another after the catalyst. The system compares the oxygen levels indicated by the two sensors and if it sees that they are out of specification, either too high or too low, flags up the fault code ‘catalyst efficiency below threshold’ but cannot distinguish between the different causes.

In this case, there were four possible explanations. The catalyst itself may have been malfunctioning; the rear Lambda sensor may have been faulty; too little oxygen may have been arriving at the cat from the engine; or there may have been a leak allowing surplus air, and additional oxygen, to be sucked through the cat. To separate these possibilities and create a simple test plan, the next step was to look at the live data coming from the two Lambda sensors when the engine was running.

With the engine running and the cat up to temperature, the output signals from the two Lambda sensors were displayed by the diagnostic tool. The first sensor, before the cat, was showing normal voltage readings. However, the output voltage from the second sensor remained steady at a value well below the specified reading, indicating a permanently lean condition (too much oxygen) after the cat. No wonder the system thought the cat wasn’t working properly! It was still possible that the rear Lambda sensor was at fault, so the engine was revved briefly to enrich the exhaust mixture. Sure enough, the sensor responded with increased voltage, making it unlikely to be the cause of the fault code.

With the rear sensor excluded as a cause, and the front sensor indicating normal exhaust mixture before the cat, only two possibilities remained: a faulty cat or air being drawn into the cat through a leak. The easiest one to eliminate was the leak, using a very quick and simple test. In a well-ventilated area, with the engine running, the exhaust tailpipe was blocked off. Normally, with a sound exhaust system, this would choke the engine so the revs would gradually drop.

In the Peugeot tested, the engine carried on running happily with the tailpipe completely blocked, indicating that exhaust gas was able to find its way out from other exits. To identify where the leak was occurring, the engine was switched off and a smoke generator connected to the tailpipe which gradually filled the exhaust with thick smoke. This was seen to escape readily from the joint flange at the end of the cat where it connected to the exhaust downpipe. Crucially, this was before the second Lambda sensor and, since gas leaks work in both directions, it meant large quantities of air could be drawn into the exhaust stream before it passed the sensor, so giving excessive oxygen readings.

The exhaust was detached and manipulated to improve its alignment with the cat flange, then refitted to make an effective gas-tight seal. When the smoke test was repeated, no leaks were present. More importantly, with the engine running and up to normal temperature, the voltage output from the second Lambda sensor was now showing within specification on the diagnostic display. Without following this logical process and the guidance of the diagnostic tool, it would have been very easy to replace the sensor, or even the cat, without correcting the fault; an expensive and unsatisfactory outcome for the customer and frustrating for the technician.

The next step was to clear the fault code from the system. Once this had been carried out, to establish that the fault was genuinely eliminated and make sure the engine warning light would not come on again, another menu in the diagnostic tool was selected, EOBD.

In EOBD mode, the Delphi Technologies diagnostic tool focusses only on faults relating to emissions, but shows these in more detail than the regular display. One of the EOBD screens displays which parameters are ready to be tested, showing them each as ‘yes’ or ‘no’. With the ignition on but the engine not running, the cat and the oxygen sensor both appear as ‘no’ but once running at normal temperature with the cat fully lit, these will switch to ‘yes’. At this point, if the engine warning light has not come on, the technician knows the repair has been completely successful.

Only after a positive result at this point was the Peugeot released to its owner. By using the Delphi Technologies diagnostic tool, no expensive parts had been unnecessarily replaced and diagnosing and fixing the fault had been an unexpectedly quick process. Such an outcome works to considerably strengthen the relationship between the owner and those completing the work – the customer appreciating the expertise and cost-saving offered by the garage, while the workshop boosting throughput and set to benefit from increased customer loyalty.

Further information on Delphi Technologies’ diagnostic solutions can be viewed at http://bit.ly/DelphiDiag