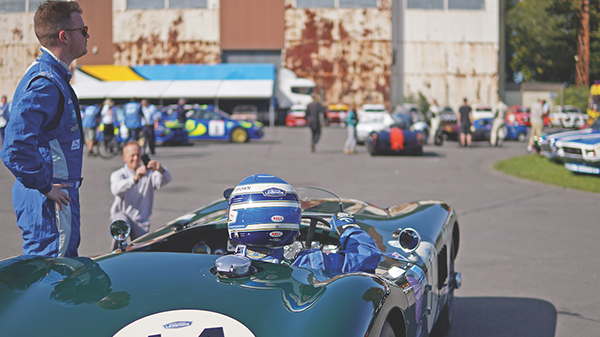 Just off the A4421 in Oxfordshire, near a rather nondescript looking housing estate, is a field – but not just any field, this is Bicester Aerodrome, formerly RAF Bicester. Planes started flying from here in 1911 and during World War II the location was used to train pilots in such imposing beasts as Bristol Blenheim bombers and Spitfires. It was used by the RAF all the way up until 2004 for gliding.

After a failed attempt to reinvigorate the area into new housing, in 2013 the decision was taken to try and develop the site into the UK’s first dedicated business park for historic motoring.

With 2020 being such a ‘unique’ year, many events have been cancelled. As we approach the end of the year, it looks as if attempts to try and get further events off the ground may be met with further challenges. But, just at the end of September, there was a slim window of opportunity to hold a few gatherings. The organisers of the London Classic Car show decided to create a show at the Bicester Heritage site.

I must admit, I got extremely distracted in the car park. Such events, of course, draw fellow car enthusiasts – on one side of me was a McLaren and on the other, a Mitsubishi GTO. The walk into the event was lined by a row of delightful classic cars, including multiple Jaguar E-Types and even a Daimler SP250 in British racing green. A lineup befitting of an entire event, never mind just a small display near the entrance.

Once inside, I was further distracted by an original Fiat 500, by a gaggle of Alpine sports cars, a BMW Z1 and a new Aston Martin DBX. Not forgetting a Triumph TR7. Or the MGB. I may have spent too long looking at a Rolls Royce from 1913 too.

When I’d finally pulled myself away from this glorious collection, I stumbled across a small section of asphalt that had been turned into a racetrack for the weekend. While being up close to a collection of ex-Colin McRae rally cars was a sight to behold, at this event they also get thrashed around the track at high speed.

There is nothing, nothing, like the deep burble of a flat-four boxer engine racing towards you before it’s flung at a 90-degree angle to the left in a cloud of tyre smoke. I was weak at the knees by the time a rally-spec Mk2 Escort arrived at full chat…

This all sounds rather lovely, doesn’t it? But while the main event was an enjoyable epitaph to venerated automobiles of yesteryear, I also wanted to check out the day-to-day businesses who call this site home. I walked away from the classic car auction, by now in full swing, and exited through the rear.

The Bicester Heritage site is a treasure trove of independent workshops and car specialists that are usually rare as hen’s teeth, spread around the country. Companies here include Classic Oils Ltd, Kingsbury Racing Shop, Auto Wax Works, The Motor Shed and Classic Performance Engineering, to name but a few.

They all utilise buildings formerly used by the RAF and I’m told there are some rather special cars stored in one of the former hangars. The uniqueness is having them all located within the one park and I’m sure they help each other out when it comes to part sourcing or complimentary services.

There is a real sense of community, each business with their shutters open resplendent in the sunshine, welcoming new visitors to chat about camber angles. Two people casually push a priceless Lancia 037 past an AC Ace that is parked outside one of the garages. Behind the main street, a Caterham 21 is having a check over. I’ve never seen examples of the Lancia or Caterham in person before, but it feels like an everyday occurrence here.

This was the automotive equivalent of food takeaway outlets located next to each other, but set in the 1930s, and smelling of racing fuel instead of garlic mayonnaise. Surreal, but also a real treat to wander around.

I hope that the site continues to grow and sees more businesses pitch up because right now, Bicester is a hotbed of classic car technicians and experts.

The lasting impression from my visit wasn’t just the epic nature of the cars on display, nor the eclectic collection of companies, but that this was a workable template for a COVID guideline-compliant car event. Even the spectating areas next to the track were segmented to spread out the crowd. I really hope that in early 2021 we can enjoy more celebrations of automotive history such as this.

To meet up with fellow enthusiasts is something I, and many others, have missed. Thanks to the hard work of the marshalls, security and organisers, I felt safe at The Classic Car Drive In Weekend. When things get back up and running, an event at Bicester Heritage will be the top of my ‘to-visit’ list.