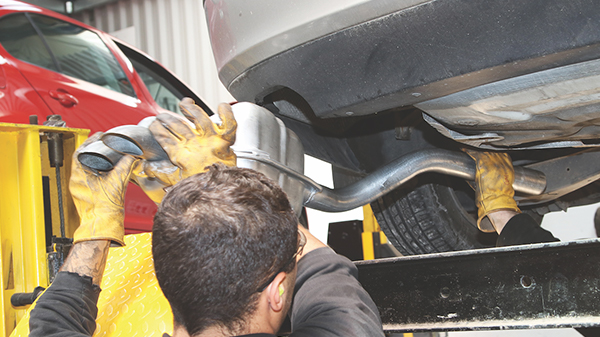 Exhausts are hardly the easiest parts to fit, which led Rob Marshall to question Klarius for advice about how technicians can prevent things from going wrong, when installing a replacement exhaust system.

What hope can even the finest master-tech have of fitting an exhaust system, when errors occur so frequently before the part is even delivered? Unsurprisingly, with the explosion of motorcar model ranges, let alone engine and transmission options, aftermarket exhaust system part numbers have ballooned. Take a Vauxhall Vectra C as an example: the 1.8-litre petrol version of which may have one water pump listed but at least ten different options for the exhaust system.

During the ordering process, you might find several different systems listed for a particular vehicle. Even after entering a number-plate on an online catalogue, do not pick the first listing and presume it to be correct. Clarify that the production year and specifications especially are correct, as well as the body style. Specifying a system for an estate instead of a hatchback might result in the wrong part arriving. Should you order through a motor factor, supply as much information as possible. From the OEM standpoint, consider that post-launch development and revisions (including facelifts, which may introduce upgraded or new engines) can mean an original exhaust system may have been redesigned. Such changes range from relocating hangers, to the complete installation of emission control technologies.

These issues may sound obvious to a casual reader but, as Klarius revealed to AT that 80% of calls received through its customer helpline are down to the incorrect systems being ordered, garages need to focus harder on order accuracy.

TYPE APPROVAL: DEVIL IN THE DETAIL

Excessive noise is a further issue, which is attracting the attention of various police forces, especially in urban areas. As it is illegal for any exhaust to be louder than that fitted originally (which is tested subjectively at MOT Test time), all that a road traffic officer needs is a suspicion that the system is louder than standard, before testing it formally. These decibel noise limits, incidentally, are published on the V5C registration document, so each car made (approximately) within the past 15 years has easy-to access data for police officers to reference.

Bulky and heavy exhaust systems are not the easiest of parts to fit accurately and, while the majority of technicians are competent, occasional reminders of useful fitting tips might help. Relating to incorrect systems being ordered in the first place, some enterprising fitters improvise in response to situations where the hangers may not quite align, for example. While this might work in the short-term, it risks prejudicing the exhaust system’s integrity and courting premature failure.

New mountings should always be specified with a new exhaust, because old, worn items will increase flex and increase the risk of the exhaust fracturing. Naturally, in a warranty claim situation, you may be required to prove that you replaced the mounts at the same time as the new exhaust was installed, for the guarantee to be honoured.

Separating old pipes tends not to be easy, thanks to corrosion fusing them together. Striking them, however, risks deforming the metal, making removal even harder. On one-piece systems, check carefully for any marks that denote the position from which you can cut-off the rotten section. Should you replace the entire section, start from the front pipe and work backwards.

Be sparing with exhaust assembly paste. It is not required on flange, flare and olive-type joints. Do not use any paste in positions where it could enter a catalytic converter, because the paste damages the monolith, promoting failure. Where paste is employed on slip-type joints, apply the paste on the ‘male’ end, or to the outer slots only (using a gloved finger) so that any excess is not pushed into the exhaust system on assembly.

While discussions on quality tend to focus on mandatory Type Approval in relation to catalytic converters and DPFs, it is worth noting that the exhaust pipe and silencer is not subjected to the same standards in the UK as Europe, where Type Approval of the whole system is mandatory. Yet, why should you care? Surely this would reduce red tape and be a good thing?

Not necessarily. Fitting a system that has not had its quality standards assessed and confirmed may cause difficulties for both you and your customer.

A key technical issue is that a Type Approved system ensures that the correct degree of back-pressure is maintained. As background, any engine is designed for a specific gas-flow through its piston chambers, valves and exhaust system. Also, the pistons rely on some backpressure to push against to balance the gas pressure within the engine to maximise power and torque. Non-type-approved exhausts can provide incorrect backpressure, causing the engine to run inefficiently. Difficulties with passing MOT emissions tests, an illuminated MIL light, and/or limp-home mode activation are not unknown issues but diagnosing these issues to a newly fitted, poor quality exhaust system is not easy.

Should your customer drive on the Continent, the risks are heightened of the car failing a roadside spot inspection and being removed from the road by regional authorities. This can result in a fine and the vehicle being declared unroadworthy, until an entirely Type Approved exhaust system is sourced and fitted.

With low emissions zones (LEZ) coming to various UK city centres in the near future, ensuring that a proper exhaust is fitted to a vehicle will become even more relevant. While it has been proposed in previous years but has not yet become widespread, it is possible for law enforcement to ramp-up spot-checks on emissions and target particularly uncompliant exhausts. Risks of fines will be higher if non-Type Approved silencers and pipes are fitted, because they might not meet OE specifications.