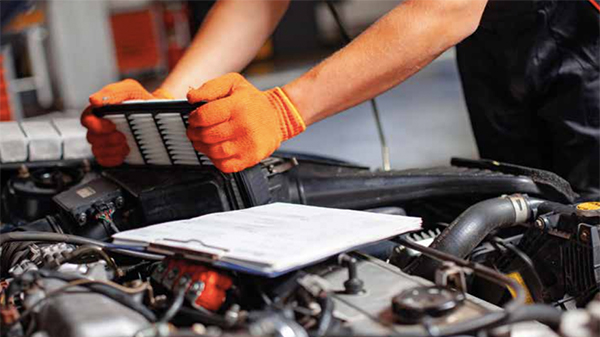 Some say that the advancing technology and associated complexity of the motor car is making fault diagnosis and repair more difficult. Many in the trade call out the computer controlled ‘this’, or the electric ‘that’, as a reason why they can’t find the root cause of some problems. Software updates are a rising star in curing some symptoms; the fabled binary screwdriver (a software fix) has to be high on the modern technician’s list of things to do before getting knee-deep in panels and covers on a strip down folly. These software fixes are generally referenced in the vehicle manufacturer’s own tech bulletins.

I believe that one thing that the advancement of technology has done is to expose a technician’s poor diagnostic techniques or, indeed, an indifferent workshop culture. This can be summed up by a very short ‘diagnostic process’ of scan tool, DTC, parts swap, fix, or no fix – then repeat. In many workshops, and for many technicians, the process of diagnostics and responsibility for diagnostics is projected, by proxy, to the scan tool.

I have lost count of times, during a nightmare diagnostic job chat, that I’ve heard the tic-tac of “the scan tool said it was…”, followed by “…and so I put one on, and it didn’t fix it”.

So, what went wrong? Were the techs over confident with the scan tool/ ECU/fault code capability? Were the techs under confident in their ability to run some tests? Did the pressures/ culture of the workshop mean that they weren’t given enough time? Is the workshop’s diagnostic process limited to only that ‘method’? The reasons differ from tech to tech and from workshop to workshop, but the fact is that tens of thousands of cases of misdiagnosis are happening each year within our trade, with either the customer picking up a bill for parts and labour, fitted but not required, or the garage picking up the bill for parts and labour, fitted but unable to be charged, due to misdiagnosis. Parts houses are also affected by and can affect this (but that’s another story for another day).

I believe that the adoption of a basic diagnostic process and a set of rules- of-engagement would help prevent many of these cases of misdiagnosis. I have a diagnostic mantra, “Measure the right thing, in the right way, at the right time, with the right tool”. It seems like quite a flippant, throwaway statement, but take a moment to consider it. If you’ve got the diagnosis wrong and you take the time to review why, there is an 80% chance  that one of these things wasn’t done right. Better still, start the job with these ‘4 rights’ in mind and you’ll increase your success rate.

To stand a chance of changing the …“and so I put one on, and it didn’t fix it” situation, the nuts and bolts of a diagnostic process have to be firstly understood and secondly, implemented. Diagnostics isn’t exclusive to the field of vehicle repair, it is practiced widely. There is merit in developing a deeper understanding of diagnostic techniques. This next section is a bit wordy, but please stick with it. This may highlight a missing link and provide a much better understanding of the process.

HOW TO APPROACH PROBLEM SOLVING

It is critical to understand the difference between a symptom and a root cause. A symptom could be defined as ‘an observable behaviour or an effect indicating a fault condition’. So, a misfire is described as a symptom. A root cause could be described as ‘an initiating cause of a condition or causal chain that leads to the exhibition of an observable effect’. So, a tight tappet, failed injector, bad spark plug, bent con-rod, faulty ECU are all potential root causes of the symptom misfire. 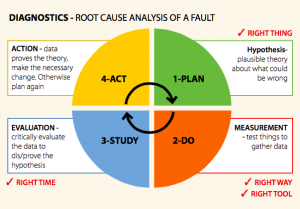 Which one of the potential root causes should we choose to investigate? Technicians should follow the steps Plan, Do, Study, Act (see image). The Plan aspect is to develop the hypothesis. A hypothesis can be described as ‘a supposition or a proposed explanation, made on the basis of limited evidence, as a starting point for further investigation’. This approach to problem solving, learning, or discovery employs a practical method, not guaranteed to be optimal or perfect, but to be sufficient for the immediate goals of developing a credible starting point. This is where experience comes into play and it may explain why junior techs who can drive a scan tool, may find it difficult to do ‘proper’ diagnostics – developing a credible hypothesis will depend upon experience.

A good hypothesis can be defined as being simple, general, avoids making too many assumptions and makes a prediction that can be evaluated. The hypothesis gives us a starting point for data gathering and critical evaluation and it will either be proved or changed as the test data is gathered and processed. A simple fact is that the better the hypothesis, the shorter the diagnostic process.

A common, poorly executed diagnostic process usually jumps from Plan, “I think it could be a spark plug”, to Act – changing the part, theorising as to the root cause before, or in many cases, without relevant data having been gathered or evaluated. Plan – Act is half a job. What should have happened is that the hypothesis should have been challenged by testing (Do) and revised in light of the Study of the resultant data. The genius of this technique is its ruthless logic and well defined, methodical progress towards the root cause.

Our upcoming two-day training course ‘Diagnostics in the Golden Hour’ will give practical advice on how to be highly effective and successful in vehicle diagnostics over a wide range of faults. Effective use of a wide range of diagnostic tools and some highly practical test and measurement techniques. Critically, it also covers how to make money from diagnostics.