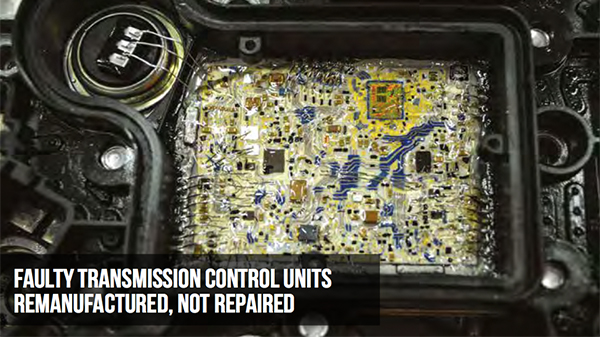 When you think of Mercedes-Benz, most would associate German reliability and luxury, especially in the prestige models, but you will see much of the same technology in the smaller models. Indeed, some tech can only be found in the A and B Class ranges, but don’t think comfort has been compromised.

The Transmission Control Unit, TCU, found in both series, delivers a smooth gear change and drive, much like you would expect to find in the higher class models. Both models feature a Temic VGS 722.8 Continuously Variable Transmission, CVT, unit with torque converter, simply because it functions relatively comfortably and requires little space to be fitted. Its managed by mechatronics, a mixture of mechanics and electronics. The mechanics are a warren of channels and valves controlling various components within the gearbox, the electronical component of the TCU is classed as the Temic VGS.

The Temic VGS controls the electronic automatic transmission or gearing in all modern automatic Mercedes-Benz A and B Class vehicles since the change over from Hydro Mechanical Controls. The TCU uses sensors and data provided by the ECU to calculate as and when to change gears, providing optimum performance and much better fuel quality. It’s essentially the brain for the automatic gearbox.

When the TCU is faulty, many fault codes can be present, but the more common faults that we see with these units are P0720, P0722, P0793 and P0794, which relate to either the Output Speed Sensor or Shaft Speed Sensor. These repairs can be tricky due to the small nature of the circuits, processors and detailed soldering needed to replace and remanufacture the unit, as well as specialist tools needed for the smaller components found on the PCB within the unit.

At ACtronics, we always first test the unit on a bespoke test rig, specifically developed by ourselves to simulate the unit being on the vehicle, so we can send signals to each one of the speed sensors. We then view these signals through live data, which will show us whether the faults that have been mentioned have replicated under testing. We do not test these on vehicles and there will be some instances where we will not be able to test for particular external faults, simply because we will not have all the sensors and other parts of the vehicle connected to the test rig.

If a fault is found, the remanufacture process begins, which involves removing the protective gel that coats the PCB on the TCU using specialist equipment and techniques, so the PCB is not damaged. Rather than repairing the one broken or faulty component, all components that usually fail or are likely to fail are replaced, even if they are not faulty at that moment in time, to make sure the remanufactured TCU lasts at least as long as a new unit would.

Once we have remanufactured a unit, we are effectively making the unit as good as new, in some cases better than when the unit originally left the factory, so we are confident providing a two-year warranty. By remanufacturing the unit, rather than repairing, we aim to extend the life cycle of the vehicle, whilst keeping costs as low as possible for our customers and, in turn, their customers.