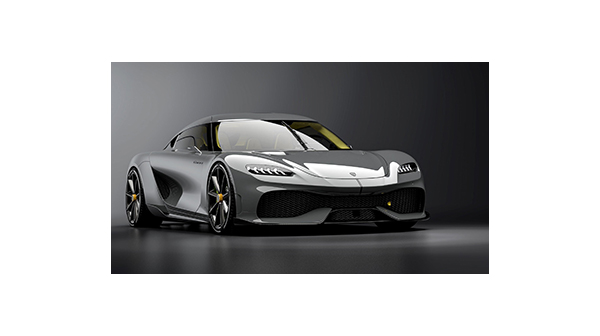 While BMW stole a march on many rivals with the electrified i3 back in 2013, and the subsequent i8 sportscar in 2014, since then it could be argued that the Bavarian company has been resting on its laurels.

With the i8 ending production this April and the i3 a little bit long in the tooth, this new BMW Concept i4 concept previews a sporty electric saloon to combat the likes of the Tesla Model 3, which has been eating away at sales of D-segment cars such as the venerated BMW 3-Series in recent months. This is Munich fighting back.

The i4 is powered by an 80 kWh lithium-ion battery pack, drive is through the rear wheels and BMW promises the car will be set-up with performance driving in mind. Translate that to 0-62 mph in ~4.0 seconds and a top speed “in excess” of 124 mph. The estimated WLTP range is 373 miles.

But the numbers don’t tell the whole story. This concept features the fifth-generation eDrive system, which means batteries that are lighter (550 kgs) and more compact than previous BMW designs, combined with an electric motor that can now generate significantly higher power levels. These will be first put into production on the up-coming iX3 SUV.

You will be able to choose from three ‘Experience Modes’, né drive modes, labelled ‘Core’, ‘Sport’ and ‘Efficient’, plus there is a BMW M lap timer – should taking your EV to the circuit take your fancy. The sound of the car has been created in collaboration with renowned film-score composer Hans Zimmer. Perhaps in the future, we could see famous musicians working with car manufacturers to create catchy beats every time you accelerate? Hopefully not.

Imagine this design with different wing-mirrors, more sensible wheels plus a regular steering wheel and you’ll be close to the production-spec i4 due in 2021.

What noun do you use when ‘supercar’ and ‘hypercar’ are just too ordinary? Koenigsegg likes to think that its latest creation, the Gemera, is the world’s first ‘Mega-GT’. After looking at the specifications, this description seems to be apt.

Headlines figures are 1700bhp and 2581lb ft of torque. You’ve got the looks – and the price at $1.7 million – of a hypercar, but space for four adult occupants and four carry-on suitcases. 0-62mph is dispatched in a mere 1.9 seconds and the top speed is 250mph.

But these stats alone aren’t the interesting part of this car. It’s how these figures are produced that is fascinating.

There is a mid-mounted 2.0-litre, three-cylinder, petrol engine with two turbochargers attached that can run on renewable fuels such as ethanol or methanol. This produces 600bhp and power from it is sent to the front wheels. Then, there are two electric motors on each of the rear wheels and a 15-kWh battery pack under the front seats which you charge overnight. This is then calibrated to work together to provide a four-wheel-drive plug-in hybrid monster that Koenigsegg claims is carbon neutral.

A four-seat car with space for an Aldi shop and mind-bending performance. Sounds too good to be true? Well, they are making 300 of them and order books are filling up. Best get your deposit in soon!

It’s been 13 long years since the Fiat 500 was reborn as a cute urban runaround based on the Panda. At the beginning of 2020, this model was given an update in the form of a mild-hybrid variant. However, to sit alongside this is a much more exciting proposition. An all-new 500.

Simply called the ‘Fiat 500’, rather confusingly, it sits upon the first new small-car platform from the FCA group in well over a decade. As a pure-EV, it features a 42 kWh battery, an estimated WLTP range of 199 miles and CCS for charging speeds of up to 85 kW.

Compare that to the Honda e, for example, which has a 35.5 kWh battery, or the Mini  Electric at 32.6 kWh, and the Fiat provides more range than it’s supermini EV rivals.

You’ll notice that the looks have changed too, although not radically. LED lights adorn the front, alongside a more aerodynamic snout. Inside is a bigger change, now incorporating a brand-new touch-screen interface and digital drivers display. It comes, for now, only as a two-door soft top.

In terms of technology, Level 2 autonomy is standard in the form of adaptive cruise control, lane-keeping assistance and speed limit support, a first for a car of this size.

By law, BEVs have to play a high-pitched sound on the outside to alert pedestrians. The new 500 takes this to another level, as it can play a melody instead of a plain warning sound, plus new sounds can be downloaded by the owner. Which is either going to be a fad or set a new standard for car customisability. Somehow though, I can’t see your favourite AC/DC song being available due to copyright law.

Available later this year, via a ‘first edition’, pre-orders are available online right now for £500 and the total list price is £29,000. Oh, and Leonardo DiCaprio has signed up as the car’s launch figurehead. Fiat is going ‘all in’ with this one.

Geely-owned Volvo subsidiary Polestar is starting to branch out into its own designs and is previewing the future with this, the Precept. The Precept is a concept car that highlights not only the brand’s future design direction but an innovative selection of new technologies.

Firstly, it is equipped for fully autonomous driving, thanks to a LIDAR sensor suite mounted upon the glass roof. Of course, LIDAR right now, as evidenced by Waymo’s self-driving cars in the US, requires an array of ugly cameras and sensors that stick-out from the vehicle in an ungainly fashion. With each iteration, they get smaller and more advanced, so this Polestar looks ahead to a time when they can be seamlessly integrated.

The autonomy, however, is very much a flight of fancy. A vision of what may happen in the future. The interior materials designed to deliver an 80 per cent reduction of plastic waste and 3D-knitted seats made from recycled plastic bottles, however, are something that we will see in near-future production cars as additive manufacturing processes and sustainably sourced materials become en vogue.

Even closer to reality is the interior touch-screen system. Instead of using a proprietary infotainment system, the Precept makes use of Google’s latest Android Automotive, enabling Google Assistant voice controls, live traffic updates via Google Maps and Spotify music streaming. You don’t plug your phone in to use this – like the current Android Auto or Apple CarPlay – but rather the car itself features mobile data and utilises Google’s software as the default. This will be available for the first time to the public on the upcoming Polestar 2, deliveries starting this year, and will be available on other car brands from 2021.

With zero information about charging speeds, motor layout or battery sizes, this concept isn’t near dealer forecourts any time soon, but some of the technology certainly will be.