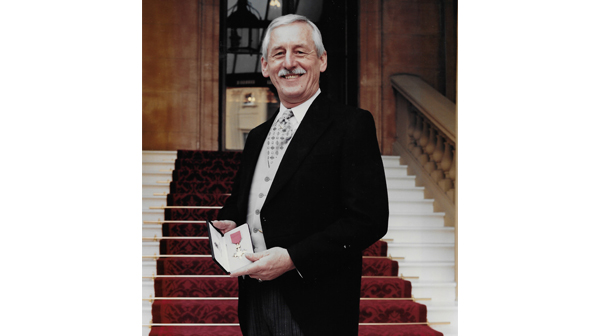 Geoffrey passed away very peacefully at home surrounded by his wife and family after a very short illness.  He had been the victim of Alzheimers for a number of years and his immune system was compromised by the illness, it was, therefore, not possible for him to survive a chest infection which weakened him.

He had the most varied career during his working life, starting off after school with the Northern Drama School where one of his first roles was in the York Mystery Plays with Dame Judi Dench.  He then spent several years treading the boards, in children’s theatre and in weekly rep.  He had a part in the Mousetrap when it was first on the London Stage and then went into TV with parts in Emergency Ward 10 and the Army Game.   Acting was his first love but he made the decision to hand in his Equity Card when his first wife Ann became pregnant.

Realising he needed to start earning regular money he went to work for Heinz and after a time in production he then went on to become part of the sales team.  From there Geoffrey moved to the oil industry and worked for Texaco.  So disgusted was he at the treatment of petrol site tenants that he decided to start up a Trade Association – The Petrol Retailers Association – in conjunction with a like minded gentleman called Les Ward.

He certainly made his mark in this sector and organised a mass rally of petrol tankers to storm into London and present a petition to government.  So successful was this that along with others his involvement finally saw the introduction of government legislation to finally outlaw the restrictive trade practices of the major fuel retailers.

The PRA was then absorbed into the Motor Agents Association (now the Retail Motor Industry Federation) and following a year with the organisation he was approached to become the CEO of Ben, where he stayed for the remainder of his career, retiring at the age of 65 having served for 25 years.

It was his career with Ben which marked him out for the exceptional person he was, compassionate, caring, listening and above all generous with his time for staff and beneficiaries alike.  He was responsible for starting to provide specialist care for young disabled people from the industry alongside Alzheimer’s care units in two of the four nursing and residential centres. This was revolutionary in that time.  In conjunction with the then Director of Welfare he set up the first industry day care centre at Peugeot in Coventry and the centre continues to thrive, again another ground-breaking development attracting press coverage throughout Europe.

Each month he took a trip round the country to visit the four centres and this was so valuable to staff and residents who were able to chat to him about any concerns or worries.  He always did his utmost to resolve any problems when they were identified.  His leadership proved to be invaluable when the 1990 recession hit and he persuaded each member of staff to take a 5% pay cut, led by himself and also to volunteer to give 5 hours each week in the centres.

For his work he was awarded an OBE in 2000, a well-deserved recognition of his contribution to so many fields of endeavour, he made a significant difference to the lives of so many people.  Even after retirement he continued to be part of several organisations, supporting them as much as possible – The Fellowship of the Motor Industry, the Motoring Guild of Advertisers and also a group called the Garrison Players – during his retirement years he was able to get back to his first love and become a leading light in the amateur dramatic groups locally.

His funeral takes place on the 14th February 2020 at 12 noon.  For details please contact Tina at tsteele47@aol.com.