LATEST NEWS
You are at:Home»Article»Giving ECU’s a new lease of life 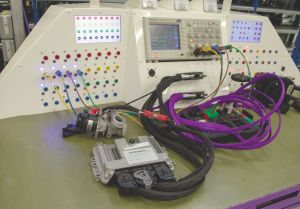 Engine Control Units, or ECUs, are integral to any modern vehicle. They form the brain of the engine and are what essentially controls it, ‘talking to’ the other control units on the vehicle.

As the ECU is constantly operating, processing signals and data, it is inevitable that the small unit is likely to become faulty at some point in its life. But this doesn’t mean that it is the end of its life cycle when it does develop a fault.

ECU’s in general are relatively hard to damage, due to most vehicles having other modules and fuses in place that are designed to fail first before the ECU does. However, when such an important control module does fail, a new one from a dealer can potentially write the car off, ending the life cycle of the vehicle many years before it needs to be.

Replacing the ECU for a new one could resolve the issues on the car; however, it condemns a unit that can potentially be remanufactured, increasing the amount of automotive environmental waste unnecessarily and increasing the cost for the end customer.

In this article, we will be talking about the EDC16C34 ECU, which can be found on Ford, Mazda, Fiat and PSA Group vehicles, but in this instance, the ECU will be from a Peugeot 206.

Some of the common faults to occur on the vehicle that relate to the EDC16C34 can be:

• EGR faults or basic settings not able to set

These faults could have developed for various reasons, such as short circuits in the wiring, a spike of voltage or excess heat on the unit, due to its location within the engine bay. If the ECU has failed, the vehicle could develop a faulty injector signal, fail to start or suffer complete power loss.

Here, we will talk about the faults found on the 5-volt circuit. This circuit feeds a range of sensors, such as the throttle position sensor, MAP sensor, Camshaft sensor and Crank Sensor, with the ECU forming part of the 5-volt circuit.

The ECU ‘simply’ has two wires; one that serves as the ground and the other is the 12-volt circuit, which feeds into the ECU. The ECU then converts the 12V feed into 5V, which returns out of the ECU, feeding the sensors its 5V. If the 5-volt connection within the ECU fails, it breaks the circuit, which will then lead to inaccurate readings from all the sensors and will display fault codes relating to the sensors. This could lead to sensors being replaced unnecessarily. However, the damage that can be caused on the ECU can range from blown capacitors and resistors to damaged tracks and processors, that will all need replacing by specialist machinery and processes developed by ACtronics over 15 years.

ECU technology is advancing at an incredible rate and because of how advanced it has become; we have our own bespoke- built testing machine. The Vision 6 is able to simulate the ECU being on the vehicle, however, to do this and to not remove the immobiliser from the ECU, we would require the standard immobiliser set from the vehicle.

As we are talking about the Peugeot 206, we would require the key, transponder ring and the Body System Interface (BSI) to fully test the ECU. When the key is inserted into the ignition barrel, an analogue signal is sent from the transponder ring to the COM 2000 unit, which translates the analogue to a VAN Bus signal to the BSI, which translates to a CAN Bus signal. This is sent to the ECU and will then allow the vehicle to start. However, the COM 2000 and transponder ring are universal – we have golden units here to use when testing.

When we simulate the ECU on our Vison 6, we can adjust the correct sensor input signals that would be sent to the ECU, so that we are able to see the ECU activating like it would be on the vehicle.

By using the immobiliser components, we are able to test the unit for complex and specific faults, if the right diagnosis is done on the vehicle.

As part of the testing procedures, the ECU will also be opened so the technician is able to visually see the Printed Circuit Board (PCB) for potential physical damage to the components on the PCB. ACtronics believes in conducting a thorough, professional test on every unit.

If a fault has been confirmed on the ECU, it would enter the remanufacture process, where the ECU can be further inspected and the faulty components removed. Removing the minute components can be tricky and requires specialist developed techniques, which allows us to remove the components from the PCB without causing any further damage.

If there is too much heat supplied directly onto the PCB when removing the faulty components, it could damage the unit permanently. With our specialist machinery and developed techniques, we can control the temperature of the heat applied to within 0.5°C, for example.

Being able to adjust and control our techniques for individual units allows our technicians to provide the
best remanufacturing solutions for our customers. Once a remanufacture has been completed on the unit, end of line testing is conducted and our two-year warranty is then applied.

ACtronics has an extensive range, including: ABS-unit, ECU, instrument clusters, Throttle body, TCU and many other electronic components. The electronic components are completely renewed at ACtronics and not repaired with a temporary solution. For example, all the wires that connect to the circuit board are provided with double bounds (wires), something that does not happen with an original product. This extends the lifetime of a product and provides a good alternative to a new product.