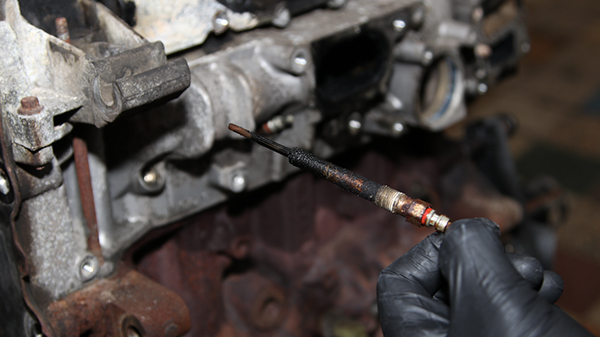 While most glow plug failures are spotted over winter, Rob Marshall looks at why recent events have made springtime checks more relevant than ever.

Nobody can deny that the last twelve months have been hard on all of us. Technicians and garages have risen to the various challenges, by keeping the UK moving throughout last year and this winter, despite not receiving the same outpouring of national gratitude as that received by some other key workers. Even so, the quality aftermarket must continue to demonstrate its considerable worth, by not only helping vehicles to recover from the consequences of past lockdowns but also to ready them for the challenges ahead, at least until their next service interval.

As many motorists have covered considerably fewer miles since last March, a responsible technician may have to justify why their cars require more attention at service time and not less. To support your advice to customers, this section of AT focusses on how engine lubrication, filtration and exhaust systems are likely to have responded to multiple short trips, or even inactivity, during a particularly harsh winter. These conditions have also made glow plugs work more frequently and for longer. While most service schedules do not mention them, pay the glow plug system extra attention, whenever a diesel car enters your workshop for maintenance.

The Bilstein Group, home of the febi and Blue Print brands, agrees that glow plug life varies greatly, depending on how they are used. Since they are called-upon particularly for the start and warm-up phases during winter, glow plugs tend to fail sooner on cars used mainly on short urban runs, compared with those that spend much of their time travelling at high speeds on a motorway.

Usually, the driver had to wait for at least ten seconds for this process to finish, before activating the starter motor. Yet, modern diesel engines start from cold virtually instantly, thanks mainly to high-pressure fuel systems and direct injection engine design that require pre-start warming only in very low ambient temperatures. Yet, glow plugs’ importance has not diminished. Their roles have expanded to hasten not only engine warm-up but also particulate filter regeneration.

Bosch highlights that glow plugs remain active after the engine has started not only to warm it up faster but also for relatively quiet, smooth and fuel-efficient operation, especially

in stop-and-go traffic. NGK adds that the glow plugs may be activated again, should the engine coolant temperature drop. While the next issue of AT will investigate DPF cleaning in closer detail, problems with the glow plug system are likely to result in high, or excessive, DPF soot loadings, or an abnormal number of aborted regeneration attempts.

The heater element(s) within even the finest quality glow plug will not last indefinitely. Their operating conditions are best described as ‘harsh’, due to reaching and sustaining temperatures that can exceed 1,000°C within just a few seconds. Champion advises that difficulty starting the engine in very cold conditions, rough running/misfiring and white/ black exhaust smoke are typical signs of glow plug problems, added to the aforementioned implications for the DPF. Glow plug life can also be curtailed by control faults that cause them to receive excessively-high voltages, or being energised for too long. They can also be damaged by issues unrelated to the glow plug control circuit, such as incorrect fuel injector spray patterns, or even poor replacement techniques.

As mentioned earlier, short journeys mean that the glow plugs are energised more often and for longer. This is one reason why quality manufacturers state that glow plugs are not service items and is why recommended mileage-based replacement times tend not to be mandatory, because, as NGK says, glow plug life is linked to the number of operating cycles. As a guide, Champion gives an expected lifespan of between 90,000 -110,000 miles. Meyle is more emphatic, stating that glow plugs should be replaced at shorter 50,000 to 60,000 miles intervals. Yet, this should be as an engine set and not individually. Champion also highlights that glow plugs might not work perfectly one day and fail the next. Their performance can reduce gradually, so they fail to achieve the high temperatures demanded by the engine ECU and the glow plug control unit.

Taking Meyle’s advice, the easiest and most non-invasive method of checking the circuit is via the EOBD socket. The Bilstein Group adds that, because the glow plug system is an integral part of the engine management, you should follow a logical diagnostic procedure, including consulting data about the circuit with which you are faced. Verify any fault codes, instead of trusting them blindly. A simple multimeter is all you need to confirm the continuity of each glow plug’s heating coil(s). NGK advises that a broken coil can result from not only age but also overvoltage. Therefore, should a recently-fitted set of glow plugs fail, fitting a new set may not offer a solution. Meyle recommends that you verify that the control unit and relay function properly, whenever you replace a glow plug set.

While we shall cover glow plug failure patterns more deeply in a future issue, technicians must be wary that poor instalment is also detrimental to plug life.

While Bosch reassures technicians that they should not be frightened, you should not be blasé. Glow plugs are precision instruments. Should they break as you attempt to unscrew them, subsequent removal is likely to be extensive, inconvenient and expensive, which risks wiping away the job’s profitability. Additionally, you risk metal fragments entering the cylinder, courting even further damage. The task can also be made trickier, by the glow plugs being positioned between the engine and bulkhead. Clearly, preparation is key and this ranges from researching if any special tools (such as dedicated glow plug sockets) will make the task easier. As the glow plugs can seize into their cylinder-head threads, by carbon and/or corrosion, you may wish to treat the area with either rust remover, or penetrating fluid. Bosch recommends that such pre-soaking will make removal considerably easier. NGK adds that using the vehicle will assist the penetrative oil’s function. Remove the glow plug while the engine is still hot, taking obvious precautions to protect your skin from burns. Reduce the chance of the plug breaking, by unscrewing it a few turns, then turn briefly in the opposite direction, prior to loosening it a little more. Once the glow plugs are out of the engine, clean the aperture of any carbon build, using a glow plug reamer; as seen in this video, demonstrating Blue Print’s tool: www.bit.ly/BluePrintTool

While the heater coil(s) are sealed within the glow plug heater tube tip, studying the removed parts can still provide clues about why they failed. Should you notice a shiny appearance or ‘swirl’ marks, carbon build is likely responsible, necessitating extra attention from your glow plug reamer tool. Excessive, or abnormal, carbon build tends to be caused by the glow plug not working properly (or at all), although predominantly low engine RPMs may also be a reason. Therefore, you may wish to advise the owner (sensitively) to modify their driving technique. Melted, swollen, or broken heater tube tips are more obvious and indicate either overvoltage (so suspect the glow plug control system), or abnormal combustion,the causes of which are more numerous.

Never fit parts that do not match the specification of anything less than OE quality. Meyle adds that the consequences of installing non-OE quality glow plugs can lead to severe engine damage, such as that caused by pieces of broken glow plug falling into the combustion chamber. Apart from buying parts from quality and well-established brands from trusted suppliers, garages also need to ensure that the correct- specification glow plug set is supplied. NGK adds that modern engine management systems can detect if new glow plugs are not to the correct specification. Aside from the risk of engine damage and poor performance, an illuminated MIL is likely to prompt the return of dissatisfied customer.

While quality parts are long-lasting, when installed correctly, they remain precision-made components, which are intolerant of excessive torque. Heed any supplied fitting instructions carefully. There is some debate about whether you should apply anti-seize grease, or not. On the one hand, you reduce the risk of corrosion between glow plug threads and those within the cylinder-head. Conversely, you risk under-torqueing with lubricated threads and compensating by tightening a little more is unwise, considering how sensitive glow plugs are to torque values. An interesting tip for preventative maintenance comes from Bosch, which advises that technicians can loosen the glow plugs slightly at service time, then tighten them to the torque value specified by the vehicle manufacturer.

THE IMPLICATIONS FOR SPARK IGNITION…

Petrol engines are, possibly, even more affected by the damp than their diesel counterparts. NGK highlights that any electrical connection is at risk of resultant corrosion damage, not least those that comprise the ignition circuit. Traditionally, the most common result of moisture ingress was difficult cold starting. In those days, car owners tended to be more mechanically proactive; many of them were confident enough to dose their ignition systems with an aerosol can of moisture-repelling oil first thing in the morning. Naturally, this quick-fix would not solve the effects of age degradation and corrosion; the same remains true today. While mechanical distributors and HT leads (albeit to a lesser extent) have been rendered obsolete, and ignition systems made more reliable and powerful, NGK reminds us that voltage leaking to earth can still strike modern vehicles. Garages should look for evidence of aged plug tops and rail coil seals, which can allow moisture to seep past, and use high-quality replacements. Meyle adds that, when a petrol engine is used repeatedly for short trips, the spark plugs cannot reach their ideal operating temperature and so carbon can build around their electrodes. This carbon fouling can have the same consequence of causing misfires on modern vehicles as it did in the past, although a long run should effect a cure. Meyle highlights that fouled plugs require higher voltages, thus exposing the rest of the ignition system to more wear and, possibly, damage.