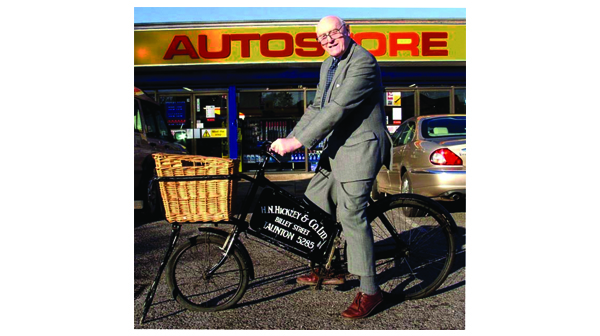 At the age of 93, starting work at 8.30am is still the daily routine for John Meikle at Somerset-based family firm, Hickleys Ltd. It is 77 years since he first joined and this year the company celebrates 90 years in business.

The company was founded by his father, Leonard Meikle, in a lock-up garage in Taunton where he made a living selling car batteries and recharging the two volt accumulators that powered domestic radios in those days. The company then established a specialist auto-electrical repair service and moved into parts wholesaling.

John says, “I was a salesman to start with, driving a two cylinder Jowett van with gravity-fed fuel delivery. Some of the local hills were so steep I had to reverse up them! Times have changed enormously during my time with the company and we have survived and prospered where others have not – we are one of only two family motor trade operators in our area that have survived since pre-war. I am quite sure that our survival is a result of our ongoing willingness to diversify.”

Through the fifties and sixties the company grew strongly, adding several new services to its portfolio including car and commercial diesel system repairs and the supply of garage equipment. Subsequently, a tentative move into the refinish market was made through one salesman and a van stocked with a range of refinish products such as paint, fillers and abrasives. The venture was an instant success and rapid expansion followed.

In the 1970s, Duncan and Andrew Meikle, the third generation of the family, joined the company.  By the end of the nineties the business had grown further with ten branches throughout the South West and South Wales, over 100 staff and an annual turnover of £10 million.

In the 2000s came further diversification with the establishment of two new business divisions; Healthcare and Diagnostics. At about the same time a decision was taken to withdraw from the refinish market due to high levels of competition and ever-reducing profit margins.

Current Chairman, Duncan Meikle says, “Selling the Refinish Division was a very difficult decision as it represented more than 50% of the company. However, success and longevity in business is as much to do with knowing when to get out of a market as it is choosing markets to expand into.”

The Garage Equipment Division is currently rapidly increasing in size with a team of 15 sales specialists and accredited engineers. Hickleys covers the vast majority of the UK and can offer anything from a lift repair to a full garage installation. Our close association with Bosch has developed to a position where we are the UK stockists for the range of Bosch vehicle lifts & MOT bays. The company also has a network of engineers that can offer a range of emission tester calibration services across the UK.

The Diagnostics Division, which now accounts for over half the company’s turnover, offers a comprehensive range of automotive diagnostic equipment and a specialist range of keys and key-programming equipment. More recently, the Hickleys Automotive Academy training school has been set up offering highly specialist courses in the field of key-programming for domestic and auto-locksmiths where customers can learn highly technical skills and open up new business opportunities.

In its early days, the company had an area of operation that did not extend much further than 25-30 miles from its base. Now Hickleys sells its products and services not only throughout the UK but to many countries internationally.

Robin Huish, Managing Director, says, “Hickleys has a real family feel to the company with many long-serving staff. Currently, out of our 66 staff, 20 have served more than 20 years and 4 over 40 years. I am typical of this, having been with Hickleys since 1974 when I started as an apprentice Auto Electrician. Now I have managed most areas of the business, became a Director in 2001 and Managing Director in 2014.”

“The success of our business is built on our ability to offer ‘added benefit’ to any product we sell, with quality installation, product support, technical support and long term maintenance, whether it’s a vehicle repair, a diagnostic product or a piece of garage equipment. The quality of our backup service sets us apart from our competitors and this is achieved by having a skilful, knowledgeable team of committed employees.

“Our various markets continue to change rapidly, usually driven by the pace of technological advance, and this brings us both challenges and opportunities. I believe we have proved over 90 years that our company has the resilience, imagination and determination to adapt to changes and recognise the business opportunities they present.  We look to the future with great confidence.”