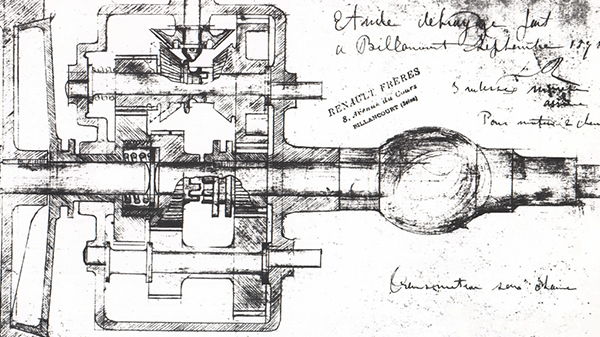 History in the making – the single-plate dry clutch

The manual transmission three-piece clutch kit might look like a straightforward component but significant engineering effort lies behind it. Rob Marshall looks at its developments and the latest advice from quality suppliers.

Had the motorcar not been invented, the modern world would look very different. Apart from the immense employment opportunities, related to their manufacture, sale, maintenance, repair and end-of-life, our society would be almost unrecognisable. Personal mobility has become a great liberator within the past 100 years and, despite demonisation by environmentalists, politicians and any passing ill-informed commentators who are over-keen to engage in a spot of polishing their halos, the motorcar has (once again) proven its societal worth during the current pandemic.

Yet, the first automobiles would not have been viable without miniaturising the recently invented internal combustion engine (ICE) and harnessing its power. Unlike the bulky steam- driven alternative from locomotives, the ICE cannot develop full-torque from rest. This did not deter some early innovators. Despite a long career in the engineering and medical fields, the Austrian engineer, Seigfried Marcus, focussed his attention on improving ignition systems and carburetion. Yet, developing a mechanism to break the link between the engine and transmission eluded even his great mind. His answer was to start the engine of his car with the spinning driven wheels raised, before lowering the jack. Naturally, this created an insatiable appetite for tyres, let alone making his vehicle rather impractical.

Meanwhile, Karl Benz’s contribution to motor engineering extends far beyond the vehicles that still bear his surname. Among his many innovations was the realisation that some degree of friction ‘slippage’ provided the answer to not only disconnect the engine from the gearbox but also to ensure a gradual and smooth take-off. The genius that he was, even his early experiments were not all successful. Inspired by drives, used by factory machinery during the Industrial Revolution, Benz developed a clutch system that utilised leather belts. It did not take long for him to realise that the material would not tolerate the resultant friction and heat for long. Like many great minds, the limited materials available at the time tempered his ambitions.

The cone clutch provided an answer, albeit not a complete one. It works by utilising a spinning (female) cone to the crankshaft, usually by having conical recess machined into the flywheel. A smaller, (male) cone, fixed to the transmission, moves and inserts into it, with the forces supplied by a substantial helical spring. Due to the tapered shape of the cones and the friction material affixed to the male cone’s outer surface, the taper clutch was extremely compact for its size and weight. A downside was that the ‘bite’ point tended to be extremely fierce.

The alternative hailed from North America, where Messrs Borg and Mr Beck patented the now universal single-plate friction clutch in 1910. Similar designs that used multiple friction plates remained popular for competition cars, a benefit of which was an increase in the working surface area and, therefore, an ability to transmit more torque to the gearbox/wheels without slipping. However, the clutch plate benefitted significantly from considerable improvements in friction material technology, especially after Herbert Frood of Derbyshire replaced the traditional felt, leather and wood linings with an asbestos- based friction material and established the Ferodo company to mass-manufacture it.

Not everyone was convinced by Mr Frood’s fancy new invention. William Morris (later Lord Nuffield and first chairman of the British Motor Corporation) preferred to use cork but, as the material had an unfortunate tendency to catch fire, Morris bathed his clutch plates in oil. This did not offer an entirely satisfactory solution, because oil compositions of the time made the plates stick together. Until epicyclic-geared automatic transmissions appeared some years later, wet clutches were unfashionable, although the Volkswagen Group’s six-speed automated-manual DSG gearbox, a continuation of an earlier Porsche development, saw wet clutches being used again for manual transmissions (albeit automated manuals), because of their ability to keep relatively cool and transmit high torque figures for their size. In truth, asbestos was such an ideal material that suppliers faced immense challenges to develop alternatives, after carmakers (and later legislation) demanded that the carcinogenic substance be banned.

Apart from suitable friction material composition, a clutch requires significant forces to clamp the friction plate against the flywheel reliably. Yet, an engineering balance is needed. While stiff springs equal higher clamp pressures, making the friction plate transmit higher torque values without slipping, they require larger forces to disengage the drive. The most obvious consequence of which is a heavier clutch pedal. For salespeople, this was becoming more of an issue, as more people were buying cars outside elite enthusiast circles. User-friendliness was also a major reason why Synchromesh (a General Motors invention and brand name) appeared on manual transmissions, the introduction of which made clutch stops pointless. This system was employed commonly on vintage sports cars and was, effectively, a friction brake that slowed-down the spinning clutch friction disc after the clutch pedal had been depressed. This allowed the skilled driver to make rapid ratio-changes on a ‘crash’ gearbox, without either making a mechanically destructive gear change, or expending valuable time, waiting for the clutch plate to slow.

By the 1930s, instead of possessing a single central clamping spring, a ring of smaller springs provided the necessary forces.

To enhance their reputes to technicians and reduce unnecessary warranty claims, the quality clutch suppliers update their fitting advice regularly.

Perhaps the most notable update occurred during the pandemic, when Valeo introduced a webinar with a spread of useful advice on how to prevent contaminating the clutch with grease, when you replace it. If you missed the broadcast, it can be viewed on-demand from here:

During the following decade, General Motors of North America had refined the system, by introducing a single diaphragm spring to replace the multiple springs. Apart from being smaller, easier to balance and cheaper to manufacture, the design could distribute pressure more evenly across the friction plate. Yet, Europeans had to wait until the mid-sixties for the diaphragm clutch to debut on a new car.

PLEASE RELEASE ME, LET ME GO…

The choice of friction material, the requirements for an adequate surface area, and the clamping pressures set must all be balanced against an effective release mechanism, which helps to permit a smooth and progressive engagement. As mentioned earlier, avoiding an excessively weighty pedal has always been a challenge. This requirement dictated whether a specific vehicle was designed with either a ‘push’ or ‘pull’ type clutch, because the additional levering effect achieved by the release mechanism can result in a lighter pedal. While cable operation (boasting either manual, or automatic adjusters) have featured in the past, most modern cars from this century boast self-adjusting hydraulic systems. Hydraulics have increased in popularity since the late 1990s, especially after the clutch release bearing was combined with the clutch hydraulic slave cylinder to create the Concentric Slave Cylinder (CSC).

Even so, carmakers throughout history have attempted to ditch the clutch pedal altogether, while retaining the single plate clutch arrangement. They failed. DAF Variomatic cars (and later 300-series CVT Volvos) featured dry plate clutches that engaged using centrifugal force in their rear-wheel- drive belt transmissions. Electronic means of declutching have also varied. Early examples used an electromagnetic release mechanism to disengage the clutch, if the gear lever was touched by the driver, with a torque converter that allowed the vehicle to stop and restart without the engine stalling. Perhaps we should be grateful that these clumsy and expensive arrangements that were used on vehicles, such as NSU’s ill-fated Ro80, did not catch-on. Instead, as electronics have matured, single-clutch automated manual models (such as Vauxhall’s Easytronic) appeared, boasting a ‘conventional’ automatic P,R,N,D gear lever gate. Mechanically, these models still possess manual gearboxes but the single plate friction clutch and manual gears remain, operated conventionally by electro-hydraulic units, controlled by a transmission ECU. Thankfully, we are starting to see manufacturers move away from these systems, the majority of which are not especially reliable and need to be driven with a degree of mechanical sympathy to make smooth progress.

Clutch development has accelerated this century, mainly in the pursuit of weight reduction, increased refinement and the need to transmit increased torque at lower engine speeds. The mass adoption of Dual Mass Flywheels, popularised initially by diesel cars but have since become virtually universal, has seen the centre damper springs removed from the OE clutch friction plate. Self-adjusting clutches have also appeared to reduce the tendency for the clutch pedal to become harder to depress, as the friction plate wears. They work by employing a self-adjusting mechanism within the pressure plate. Naturally, these systems require appreciation by the technician, as incorrect fitting can disturb the adjustment mechanism and not all of them can be reset. The main challenge that CSCs introduce is that the gearbox needs to be removed to access them, should they develop a leak. Therefore, as clutches are becoming more sophisticated, so too must appreciation levels of the technician and training. As you expect, Autotechnician will cover more about the technical details, fitting tips and training details of the latest clutches in our future editorials.