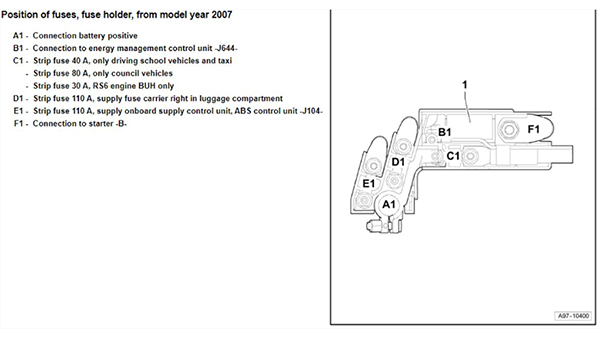 Autotechnician contributor Gareth Davies, who runs a German car specialist in South Wales, is reminded of the importance of validation in the diagnostic process.

As vehicle technicians/business owners, I am sure we have all at some point in our careers been subjected to the curse of “Ever since you did/changed…”. It’s never a pleasant feeling, and even the coolest of operators can struggle to make peace with the explanation to the customer of why/how it’s unfortunate but unconnected. A few summers back, I found myself potentially facing the same scenario but stopped as soon as the warning shot was heard. My case study touches on the humanistic element of this particular job, and also the technicality.

The job in question was an Audi RS6 ‘plus’ 2009 5.0 v10 TFSI. I checked the job sheet and saw that the customer requests were: Investigate rumble/vibration under load, AC not cold, and rear-view external mirrors not demisting. The customer was also a new, first timer. I walked out to the car park to get the vehicle prepared for a road test to check the rumble/vibration before going into the workshop for more tests. Unfortunately, that’s when the warning shot went off. I attempted to start the car and it simply cranked with no engine start. Trying again, I got the same result, non-start. Now at this point, a conscious decision was made before any investigation to advise the customer of the fault and ask if they’d like us to look into it. They were surprised but agreed. I was also surprised as it was driven to us earlier that morning under its own steam.

An initial scan showed multiple faults in various controllers, some of interest to perceived complaints, some academic or possibly historic. The faults of interest were stored in fuel pump electronics and engine ‘Fuel pump control unit defective – Static’ and ‘Fuel rail pressure too low – Static’. I left the car for a few hours and returned to the car to push it in, armed with a brace of technicians, and to my amazement, the car started and would restart on multiple occasions.

Moving on with my process, I now had the task of understanding the plausibility of the faults now that the car had returned to a running state, with no intervention other than some pixies that may have happened upon it without me noticing.

LET’S START WITH THE BASICS…

Looking at the system layout loosely, it was evident that the fuel system was made of a pre-supply pump in-tank, a return regulator and pipe system to feed returned high pressure fuel to the left side of the saddle fuel tank over to the right side where the delivery unit was. Moving from low pressure to high pressure, there were two high pressure fuel pumps in the engine bay, both with integrated regulators (one feeding each bank of five cylinders) being supplied by a single common feed from the tank. The delivery unit is regulated by a fuel pump control unit and pressure is measured at two locations, low pressure feed at Y-Piece for split to high pressure pumps, and in the rail on one bank of cylinders, using a dumb logic that rail pressure will be equal in both rails, even though monitored in only one.

Beginning with the ‘Fuel pump control unit defective’, which by now had gone sporadic, I wanted to ascertain some basic checks. Most modern high pressure injection systems, both petrol and diesel, are now likely to have a fuel pump control unit to control pre-supply pressure as it offers greater control over the delivery unit by means of a Pulse Width Modulated (PWM) signal, rather than a straight 12v on/off state controlled by a relay, as it was for many years before. The rationale being greater control over the unit’s operation can be achieved by pulsing voltage (like a dimmer switch) versus on/off. Before getting too deep into PWM signals and what is right or wrong (known goods and so on) I wanted to establish the fundamentals of what a control unit needs to be effective. A simple test showed on a meter a 12v supply was present to the unit and a good ground reference.

Looking up reference data and noting the fault code, it advised probable causes as a faulty control unit or defective wiring. A final control output test using the scan tool showed the fuel pump to operate and the car remaining in a starting working state. Satisfied at this stage a control unit was looking likely, one was ordered for a few days’ time. Continuing to cover the bases, some fuel pressure serial analysis was logged while road testing to verify the vibration complaint, and all looked correct under periods of request.

I SPOKE TOO SOON…

Conclusions were drawn on other repairs required for the original complaints and duly authorised, along with the fuel pump control unit. Over the coming days the car was moved in and out, acting up selectively. I continued to troubleshoot the issue whilst in a faulted state to try and be as sure as possible I wasn’t missing anything. Whilst in a faulted state, the car was registering limited fuel pressure at the rail and pre- supply pressure sensors. The fault for ‘control unit defective’ had returned to a static entry. Thinking about the next test I would do after replacing the unit and it not fixing it, I set about controlling the in-tank fuel pump myself with the control unit removed from the equation. I simulated a voltage across the pump, the pump worked, and the car started. Confident the control unit was confirmed as the fix, I rested easy and waited for parts to arrive.

The unit was changed, vehicle road tested and was cleaned awaiting collection. The customer had arranged collection in a few days and boy am I glad pick up was delayed. The car continued to be moved in and out of the workshop and to my horror, the next day after repair, went non-start and gave the same fault code entries for fuel pressure and fuel pump control unit. How could this be?

Feeling under 10 times the pressure of norm, I went back through my workings in the faulted state. I failed to recheck the voltage supply to the control unit in the faulted state. I’d jumped straight to the ‘next test’ before revalidating the known ‘knowns’. When I had checked the voltage supply initially, I had 12V to the control unit. Now in the faulted state, I had 3.5V. Interestingly, I also had thought some more about when it faults. Never first thing in the morning or last thing at night, only in the middle of the day. Temperature changes of somewhere between 12deg ambient at 7am, to 30deg ambient in the day was having an effect. This was amplified in the car too.

Looking at the wiring diagrams in greater detail I wanted to understand where the supply came from for the unit, as I had previously covered by a 10w bulb test light on all fuses on the multiple boards, they had all subsequently checked out as OK. The location of the power supply was in the boot (spare well area) and a standalone 30A strip mega fuse. On closer inspection, I found the culprit. The fuse was changing state with temperature, causing the intermittent volt drop to the control unit. I am well aware in my experience (particularly with VAG group) that control units get very unhappy if not operated within the safe voltage range 10v 15v. This explained why the ‘Control unit defective’ fault was being stored.

One new strip fuse later, I wiped the sweat from my brow, confident this was a confirmed fix. In terms of reflection after the job had gone out, I took stock of the importance of data validation. Considering the relevance of fault structure, frequency, setting criteria and existential factors that may be affecting the fault.

It was a harsh learning, that could have been harsher and more embarrassing. Ensuring when carrying out fault finding that enough of the right testing and data acquisition is acquired during the faulted state, is key to a successful diagnosis and repair. Is this a chicken and egg scenario? There must be a reason for the fuse to be have been weakened. In a dry area internally, no corrosion effect, so was something internal in the control unit affecting the fuse? What value current draw from the in-tank pump was present, was this having a silent background affect?

I’m a mere mortal after all and am happy(ish) to take a learning from every job I undertake. If it makes me a better technician as a result, then it’s not all in vain.