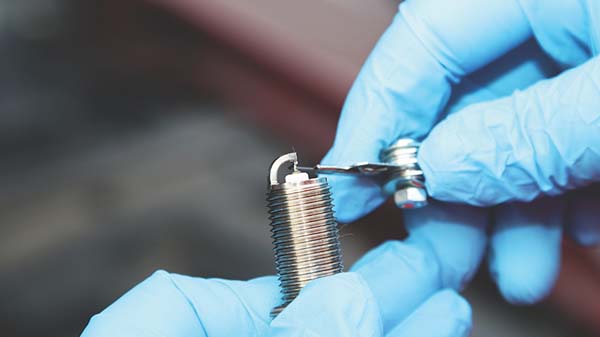 Due to the very nature of their construction, many engine management and ignition components can need a little extra consideration. Again, this is not an admission that the parts you are buying are unreasonably fragile but they need installing correctly to perform at their best.

Perhaps presuming that fitting replacement spark plugs is elementary can lead to overconfidence; it is easy to forget that they are precision parts that have to withstand thousands of volts for tens of thousands of miles. Denso, for example, highlights a common situation, where spark plugs are not tightened to their recommended torque values. Should a plug be under torqued, aside from the obvious risk of working loose, the resultant vibrations can cause the ground electrode to break down, a consequence of which is an inability to transfer heat between the plug and the cylinder head casting correctly. This can also promote insulator nose overheating, and this hot spot within the cylinder can ignite the petrol vapour prematurely. Pre-ignition can result, with obvious severe implications for engine longevity. Yet, because an overheated portion on the plug promotes the detonation, the engine management system cannot make effective adjustments to remedy the situation. Champion also highlights that under-tightening results in the plug sealing washer, where fitted, not being crushed sufficiently.

Over-tightening, however, damages spark plug physically, so inspect the removed part closely for any deformation, cracked insulators and damaged threads that may have been caused by a previous garage, especially if you plan to refit it. During installation, you may need a socket extension for plugs that are recessed within the cylinder head. Should the extension not be held parallel in relation to the spark plug position, you risk applying sideways pressure to the ceramic insulator, which can crack. Despite being damaged severely by this, the plug may still function but not under all conditions, meaning that a weak spark, or even an intermittent misfire, might result – along with potential spikes in exhaust emissions. Apart from holding the tool straight, selecting the shortest extension bar possible minimises the chance of cracking the insulator.

Yet, fitting errors are not the only consideration. NGK advises that, once an old spark plug has been removed and inspected, any debris that might have accumulated around the plug site is blown away using an airline. Furthermore, while most replacement plugs are pre-gapped at the factory, it is worth double-checking that the gap is correct with a suitable tool. Especially for older vehicles, the gap specification on a new plug might be incorrect but, even if it is right, an innocent error, such as dropping the parts box accidentally, can reduce the gap. Like spark plugs, coil packs and leads can be damaged by technicians being a little too over-exuberant during removal. To be fair, particularly if dielectric grease was not applied previously, rubber gaiters can be especially tricky to remove, so that a degree of force is almost mandatory to separate them but their moisture sealing properties might be compromised. NGK advises not only to follow manufacturer instructions but also to use any proprietary tools available. As an example, some ignition rail coils possess threads that facilitate insertion of a special tool, so that the assembly is not twisted, which might damage the coil’s internals.

By not reading instructions and heeding advice supplied with replacement coils, technicians can also make life harder for themselves, such as having to figure firing orders, when the information is provided already. While this can be a problem, promoted by the customer’s reluctance to spend more money, rather than a technician cutting corners, NGK advises that the best option is to replace single coil-on-plug as a car set, rather than individually. Misdiagnosing O2 sensors as faulty is the most common mistake that technicians make, according to Denso. The usual issue occurs, when a diagnostic fault code points to the sensor, when the real problem lies elsewhere, an issue that Denso finds is the main reason for warranty claim rejections.

NGK advises that technicians should suspect the entire circuit, when a fault code refers to the internal heater control. Checking for a resistance reading between the lambda sensor heating wires will confirm whether the heater within the sensor is intact, or not.

When a replacement part is required, NGK reveals that sensor identification references can court confusion between technicians and motor factors. For example, your diagnostic equipment might refer to ‘Sensor 1’ but alternative nomenclature includes, ‘regulating’, ‘front’, ‘upstream’, ‘pre- cat’, or ‘upper’. ‘Sensor 2’ can be called ‘diagnostic’, ‘rear’, ‘downstream’, ‘post-cat’ or ‘lower’. Being aware of these different references, when ordering parts, may help to avoid delays that are caused by the wrong part arriving. A further interesting finding is that some technicians confuse NOx sensors with O2 sensors, which is an understandable error, considering that they look very similar. However, NOx sensors possess more electrical cabling.

Engine oil leaks pose further issues, which contaminates the wiring loom and increases electrical resistance. Even if a sensor has become faulty as a consequence and is renewed subsequently, the replacement part risks being contaminated, unless the leak source is addressed. Fitted to both petrol and diesel exhaust systems, exhaust gas temperature sensors tend to be identified by their positions relating to the component they monitor, such as ‘pre-turbo’ and ‘pre-DPF’. NGK comments that describing sensors, as referenced by a fault code, is likely to be insufficient information for a parts supplier. Therefore, technicians should be aware that they may have to provide extra details about sensor locations and ensure that any parts-ordering colleague supplies this information to the motor factor.

A further issue revolves around a presumption that, because two sensors might look alike, they are interchangeable. NGK highlights that two sensors, which share identical connector types and cabling lengths, can rely on opposite operating principles. For instance, one of them might reduce electrical resistance as the temperature increases (PTC, or Positive Temperature Coefficient), but the other identical-looking part might rely on decreasing resistance (NTC, or Negative Temperature Coefficient). While we plan to dedicate a separate feature on EGR issues within a separate article, it is worthwhile considering several issues associated with the system now, especially as lockdown- type driving conditions are likely to have increased soot contamination levels that afflicts EGR efficacy.

Just as other manufacturers highlight inaccurate sensor diagnostics as being widespread, Nissens finds the same issue with EGR systems. The consequences include inappropriate conclusions, including blaming the EGR and replacing it without eliminating the root fault. The company argues that diagnosing the EGR system properly is a necessary pre- replacement discipline and covers many other aspects of the ignition and engine management systems, including MAF intake metering, the engine’s forced induction process and cleanness of combustion. The latter issues, of course, relates mainly to excessive soot production that may be caused not only by stop-start and short drive cycles but also by turbocharger, fuel injector, air filter, temperature sensor and ECU issues, including software irregularities and even aftermarket tuning.

Nissens also sees improper soot cleaning as another common workshop error, although it also points out that a new EGR valve, fitted to a system that has not had the underlying fault remedied, will still malfunction. Fitting errors include not programming/adapting a new EGR valve post-installation, which results in the ECU not communicating properly (or at all) with the replacement part.

Interestingly, many technicians do not associate EGR cooler damage with improper cooling system bleeding. While resultant corrosion and leaks obviously curtail EGR cooler life, a damaged cooler can cause exhaust gases to permeate the cooling system. AT has also come across several engine remanufacturers questioning the quality of not just EGR coolers but also intercoolers that rely on the cooling system, which are suffering from premature internal corrosion on relatively youthful vehicles.