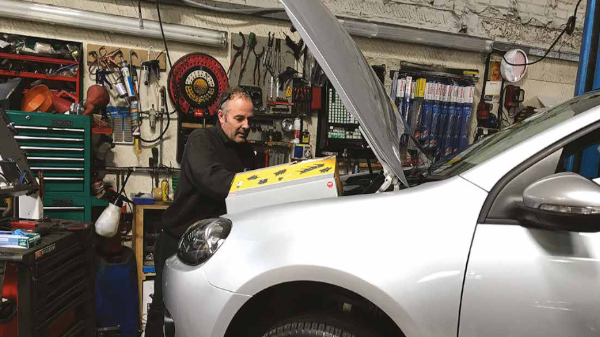 Independent garage owner Stephen Wright believes a national accreditation scheme for technicians cannot come too soon. He feels it is essential to help raise standards and ensure vehicles are safe to be on the UK’s roads. Stephen says:

”Every mechanic should be registered. Crooks end up on TV and give everyone else a bad name. It should be the same as in other industries to make sure Health & Safety regulations are adhered to, as happens in the gas and electric sectors. I think the industry governing bodies should work together to bring in a recognised accreditation system.”

The 51-year-old, who runs S J Wright Motors in the Cambridgeshire market town of March, is a firm believer in the importance of training and the need for technicians to keep abreast of new vehicle technology and legislation. Stephen, who runs a four-bay, all-makes, service repair and

MOT preparation business, is a fully trained technician who is currently working his way through the Bosch training programme, covering topics such as ignition, vehicle electronics, diesel and diagnostics.

He says: “I have always found training interesting as there is always something new that you can learn. As well as the Bosch training scheme I have attended other companies’ training events and always make a point of visiting local and national exhibitions, including Automechanika Birmingham, speaking to other people in the industry and finding out what new pieces of kit are coming on-board enables you to keep up with the new developments that are occurring in the industry.”

Ipswich-born Stephen has had a long-held interest in “taking things apart” and had his first part-time job at a garage while still a schoolboy.

He joined a local garage full-time when aged 16 after taking his City & Guilds qualifications at a local college and after working in the industry at several Cambridgeshire locations, started his current business in March 2003, moving to his current location in the town’s Station Road in 2009.

Stephen – who also runs a used car sales business P & S Autosales Ltd with his friend Paul Key – says a lot of his work is repeat business or comes by way of ‘word of mouth’ recommendation. He says: 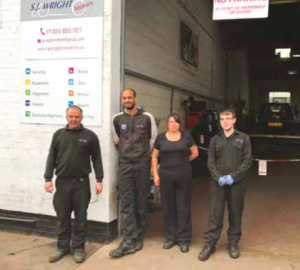 “We are a family orientated business and get a lot of repeat work and by way of recommendation. We deal with all makes of cars and also do a lot of LCV fleet business. We don’t specialise in any particular make, but we do tend to work on a lot of German vehicles as a nearby car dealer sells a lot of the German marques.

“I also advertise every couple of weeks in the local press and use Twitter and Instagram as it is a quick way of reminding people to think about servicing their vehicles and to have winter checks carried out.

“I believe Social Media is a good way to promote the business, but I feel that Facebook has become too much of a ‘slagging off’ platform, which can spiral out of control and I tend to concentrate on Twitter. However, we also still send out MOT and service reminders through the post as that still seems to be a good way of reminding drivers that their test or service is due.”

He added that he still gets great satisfaction out of doing a professional job for his customers. He says:

“One of the good things about my work is that when you have done a professional job and the customer is happy with what you have done and the price you have charged, they then recommend you to his friends. The frustrating thing is still getting the right part to complete a job, although the four main local parts suppliers I use all do a good job between them and have their own merits for supplying certain parts.

“I always try to fit the right part for the right vehicle. For example, I would always fit the specified clutch rather than an alternative replacement. As for equipment, the holy grail is not out there, you need a variety of equipment to solve different problems, such as with diagnostics. I use four different pieces of diagnostic equipment so that I can deal with any issue that comes up.”

Stephen, who is married to Melanie and has three children, is a member of the Retail Motor Industry Federation’s Independent Garage Association, which he says is invaluable in helping him deal with any legal or HR issues. As for the future, he says:

“Electric vehicles will always be about, but I have my doubts about the National Grid coping with the expected power demand. I believe that nuclear is the way to go, but until we get the hydrogen cell in the short-term, the future is hybrid and myself and Lorenzo have been taking our hybrid training courses.”