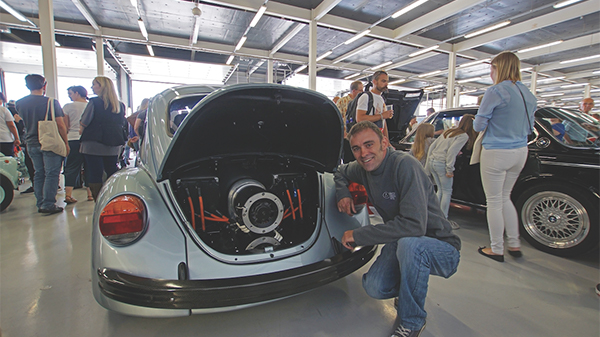 The company Electric Classic Cars takes a humble Fiat 500, Volkswagen Beetle or retro Range Rover and turns it into a fully electric vehicle for the 21st century. In fact, they can convert any classic car, pre-1990s, to run purely on electricity. The process itself started life when Richard Morgan — founder of Electric Classic Cars — decided to play around with a derelict Beetle he had knocking about in a barn. During the restoration, he tried something a little different and fitted an electric motor, inverter and batteries. This has now spawned into a full-blown company, providing electric conversions by request.

Richard and the team’s next project is a Jensen Interceptor, one of the most beautiful designs from the 1960-70s, but the process is far from easy. Before they get to work, the first task is to try and find a similar vehicle in the UK — preferably one that has its engine out. Even for more ubiquitous vehicles, this can be a challenge.

As Richard enthusiastically explains, once a vehicle has been sourced, the measuring begins. “Someone will come to us with a type of car they would like and a list of demands such as charging time, range and performance. With an electric conversion, this is determined by how much space there is for batteries, which means we have to find a vehicle to measure and calculate how many battery packs we can install. Only then can we go back to the customer with what is achievable. Even then, once we begin, we may come across something structural that can’t be moved, and we have to re-align expectations.” 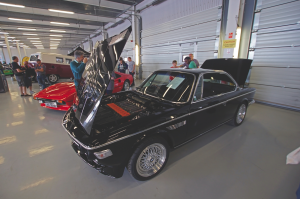 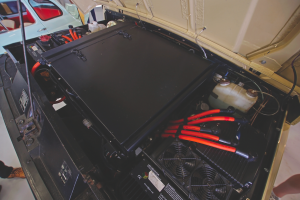 There is no doubt that the biggest technical challenge is the packaging. Customers will always want greater range, but Richard needs to make sure there are no major changes to the chassis or bodywork to keep within the original homologation. The cars will be treated by the government in the same way as their original petrol variant.

The biggest query I had was who manufactures the parts. The answer is Tesla. Which is strange, as Tesla is famously at odds with the aftermarket. They don’t provide parts, diagnostic access or allow third party part production. Everything has to be done through them directly.

“The batteries and motors are sourced from damaged Tesla cars, then we use various new controllers, chargers and cooling system elements. These vehicles are going to be scrapped or are sat there not getting repaired, so we purchase all the parts we need. We constantly stockpile things like the batteries and then sell any excess parts on our website. When Tesla produces a new car, the drive units have a lifetime, infinite mileage, warranty. The elements we use to do a conversion are extremely reliable,” explains Richard.

We were able to take a close look at their conversions at the recent Fully Charged Live event, held at Silverstone. On display was a recently completed first generation Range Rover from the 1980s. The first thing that stands out isn’t the electrification, but the quality of workmanship. These vehicles aren’t just converted in the process, some are fully restored inside and out too.

Of course, the second thing that stands out is the massive pack of batteries almost bulging out of the bonnet area, with a second set beneath the boot floor. Under the petrol cap is a Type-2 charging port and otherwise, you wouldn’t be able to tell it was an EV.

“Many people love the iconic looks of classic cars. Modern vehicles can look a bit homogeneous, making classic cars stand out more than ever, but many do not want to deal with the mollycoddling they require. With an electric conversion, once we’ve done the hard work they are effectively maintenance-free. A classic car generally isn’t a daily driver. Our customers want to use something on a sunny weekend, and they want to do it with peace of mind. Suddenly, an electric Fiat 500 starts to make more sense”. 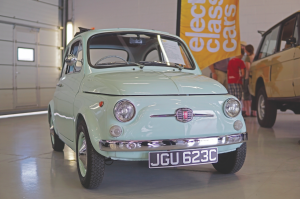 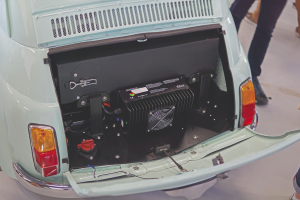 There is a certain joy to be had from changing gears in a classic car, but Richard has even thought of that too: “In our Fiat 500 conversion we still have the gearbox and you still change gears. Okay, you can just leave it in third and it will work in that one gear, but we modify the drivetrain so that if you really want to get a move on, you can change into second and experience the instant torque.

I can hear you asking two very important questions which I have avoided so far. How much and how long? A definitive answer is hard to say at this point. The whole process is in its infancy, and each conversion is custom made for each individual client. Expect around £15,000 for a Fiat 500, and up to £45,000 for a Range Rover. But nothing is off limits so far. A Rolls-Royce Silver Cloud or a Citroen 2CV, the possibilities are endless, just so long as your wallet is too. From start to finish, it took around a year for their latest BMW E9 CS project, including a thorough restoration, but each project varies.

One of the biggest challenges with electric vehicles is the relative lack of upkeep compared to an internal combustion car, and how the aftermarket will evolve and survive in the long term around this. I wonder if conversions will offer a potential revenue stream for businesses in the future, as more customers espouse EV ownership.

We’ve seen recently BMW themselves converting a classic Mini and Jaguar creating the now famous EV E-Type used during the recent Royal wedding, but both are one-off proofs of concept. Richard and Electric Classic Cars are actually hand producing cars for sale, and I applaud the audacity. It may only be in tiny numbers for now, but as batteries reduce in price and emission regulations tighten, in forty years from now, would you rather see electric MG Midgets on the roads or no MG Midgets at all?