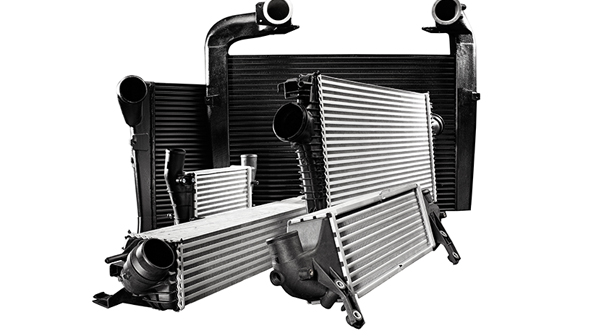 According to studies by Nissens, 43% of the current car park is fitted with a turbo – a number that is expected to grow by 30% until 2019. And with an increased focus on the environment, as well as greater attention to engine downsizing and fuel economy, the intercooler is being pushed to the limit like never before.

Engines are becoming more and more efficient, with every part of the engine being optimised and pushed to the limit. While the use of turbocharged engines generally provides a number of benefits, such as increased engine power and efficiency, lower fuel consumption, lower engine emission values and less thermal stress on the engine, previously infrequent engine issues have become more and more regular, and new ones will occur, as the systems are being pushed to their limits. 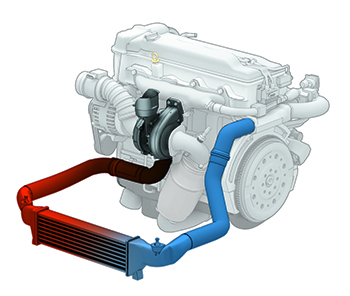 Illustration of the intercooler and turbo relationship

Since its introduction more than 30 years ago, the turbo has been decreased to half the size, but has doubled in RPM and pressure, while the temperature has been increasing to gain the desired effect. All of this increases the pressure on the intercooler, as the difference between the input and output air temperature of the intercooler is increased. Eventually, this will cause an increase in intercooler failures. Nissens Product Manager for Engine Cooling, Steffen B. Jensen explains.

“We see an increased interest in the function of the intercooler as a direct consequence of the accelerated use of turbos in modern cars. Previously, questions were focused on leakages and clogs. Thus, as more turbos are installed in vehicles around the globe, installation failures are becoming more common. It is a complex product, and if everything is not done by the book, issues will occur. This is one of the main reasons why we have experienced an increase in more complex questions over the years.”

What are the issues?

While product failures caused by stones and particles from the road, causing external damage and leakage to the intercooler, are currently the main cause for issues, two other issues are increasing in appearance with the spread of turbos: 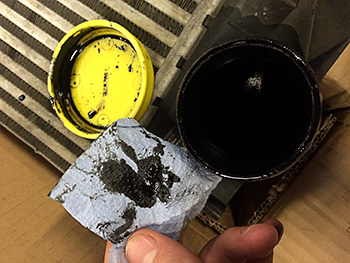 As Steffen B. Jensen states: “The market has experienced clogged intercoolers before, but turbo replacements produce a new type of risk. If the replacement of the turbo is not done according to the installation guides, turbo residues can easily clog the intercooler. Especially oil, but also other particles, plus broken off turbo parts. Furthermore, we see an increase in leaking intercoolers due to abnormally high system pressure. This could eventually cause a deformation of the plastic tank, resulting in a leaking intercooler. If residues are left in the system after an installation, there is a risk of blockage, which will cause the pressure in the system to increase. This means that the intercooler will have to withstand a much higher pressure than what it was built for, eventually causing the intercooler to fail. This is the same issue that we see when the output of a turbo is manually increased. The increased pressure takes an extra toll on the intercooler, increasing the risk of the tank blowing. 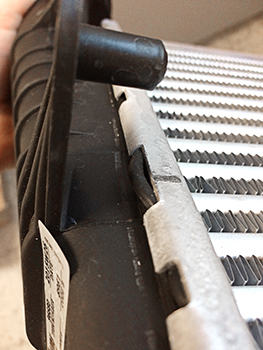 How do we spot them?

It is critical that mechanics are aware of issues related to the intercooler, and always follow the installation guides. Defective or leaking intercoolers will often showcase a range of different issues, where three in particular are more common. The Nissens Product Manager elaborates:

“What mechanics, and the drivers, can often identify a defective or leaking intercooler on is: a noticeable drop in the engine power, increased fuel consumption or unnatural smoke from the exhaust system. As the pressure in the turbo-charged system is incorrect, the fuel/air mixture will have an insufficient amount of oxygen, causing the engine power to decrease. This loss of oxygen in the system will affect the combustion process, causing the vehicle to increase its fuel consumption. As a result of this effect, unnatural smoke will develop in the exhaust system, as the increased amount of fuel in the system cannot be combusted and emitted correctly from the exhaust system. To compensate for this effect, even more pressure is put on the turbo to compensate for the missing air, which, in the worst case scenario, can cause it to break down.

So what can we do?

If a mechanic installs a new turbocharger, without investigating the intercooler first, the system will run a high-pressure sequence, where oil and particles that have accumulated in the intercooler are at risk of being blown into the combustion chamber. If this debris enters the combustion chamber, then they are at a great risk of damaging the engine. 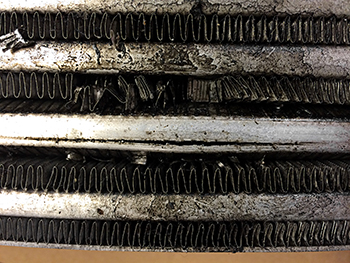 Fins are destroyed due to pressure failure. This error is often ascribed to an error in the tubes. However, the excessive amount of oil on the intercooler indicates a system pressure failure.

For that reason, Nissens argues that an intercooler should always be replaced after a turbo has failed in order to ensure that the intercooler is free from any debris – such as oil, metal or other particles.  When a new turbo has been installed, all system components must be thoroughly examined to ensure that they are not blocked by oil or metal debris.

Nissens studies suggest that 75% of all new European car models introduced in five years and forward will be fitted with a turbo, making the knowledge of the intercooler and turbo relationship more relevant than ever before.

About Nissens A/S
Since 1921, Nissens has developed, manufactured, and supplied a wide range of air conditioning and engine cooling solutions for the independent automotive aftermarket all over the world.